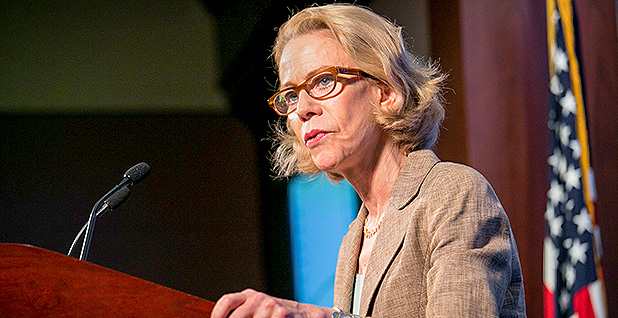 Hartnett White was an adviser to Donald Trump on the campaign trail and a rumored runner-up to become U.S. EPA’s administrator. She’s now thought to be in the running to become the next leader of the White House Council on Environmental Quality or to snag another high-profile administration job.

She recently chatted with E&E News about shifts she’d like to see in federal energy policy, life on a cattle ranch and raising Jack Russell terriers.

What do you think so far of the Trump administration’s moves on energy?

I think that they are the beginning, the very beginning, of taking significant actions that involve promises that President Trump made in his campaign. … I think they’re very, very wise, solid kinds of moves that are not anything like slashing and burning.

I’m really in support of the manner in which now-President Trump talked about environmental and energy issues. … So I am particularly delighted to hope that we will see more emphasis on what I call genuine environmental protections — the pollutants listed in the Clean Air Act. … Also, [I hope] that there will be more authority over environmental matters given to the states rather than one-size-fits-all from the federal government.

You’ve spent some time with the president. How big of a priority are energy and the environment to him?

Do you get the sense that the environment is something that’s personally important to him?

I hope to see more vigorous science at EPA. … That’s what I’m most hopeful for. That and the rule of law, but the science, I think, is very, very important. There’s differences in quality in science, and we need to get back to the high ground and use the toughest, most robust science.

You’ve written that carbon dioxide gets a bad rap. Do you think the threat of climate change is overblown?

I wouldn’t say it that way. I would say that we, the country, I think whether it’s Congress or the media, I think have overlooked the magnitude in climate policy. … I don’t think it’s accurate to say the debate is settled. I think it’s time for us to really have that exchange.

I think it’s likely they are. CO2 is a heat-trapping gas, but I don’t think we know the extent, and those scientists that have educated me, I find persuasive that it’s not likely to be very much.

I was raised in the country. I grew up in Kansas, and I’m married to a fifth-generation rancher in the most remote part of Texas on the Mexican border. It’s in Presidio County. I lived on the ranch with my husband for over 10 years. … People talk about this planet as delicate — oh, my gosh, it’s so powerful.

That’s like asking somebody how much money you have in the bank (laughs). It’s a big ranch.

I’m reading a book by Gregg Easterbrook called "A Moment on the Earth." … He had a different take on this idea that man is inherently destructive of the environment and this separation between humanity and the environment. We’re actually really all part of a great adventure on this planet where there’s life.

I do mostly read nonfiction. I probably read too much nonfiction. I get impatient when I read fiction. Just a week ago, I said, "You know what, I’m going to read some poetry." But I felt like it’s like taking medicine or something.

I have a good number of Jack Russell terriers, otherwise known as the big dog in the little body. (She’s a longtime breeder of national champion Jack Russell terriers, according to her biography on the Texas Public Policy Foundation’s website.) My lifetime wish since I was a tiny child was to always have a puppy.