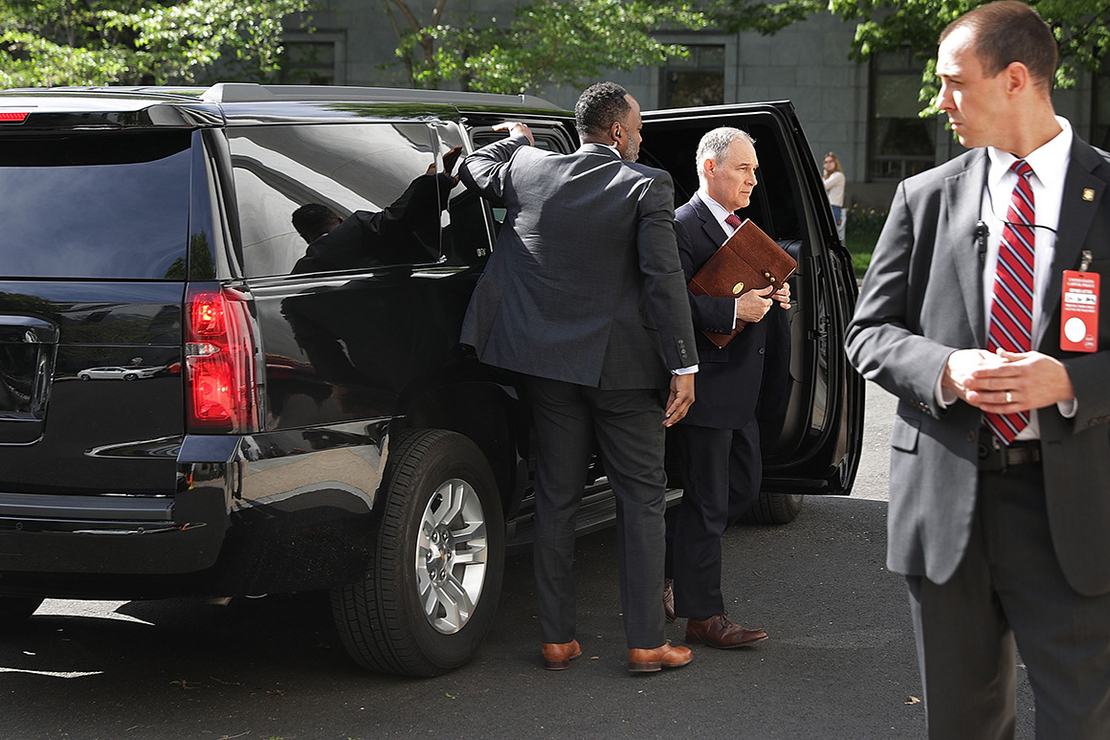 Surrounded by security agents, then-EPA Administrator Scott Pruitt stepped out of his armored SUV as he arrived to testify before the House Energy and Commerce Subcommittee on Environment on Capitol Hill on April 26, 2018. Chip Somodevilla/Getty Images

Former EPA Administrator Scott Pruitt prodded his security agents to drive recklessly and turn on emergency lights and sirens to maneuver around traffic in the nation’s capital.

Interviews with agents who served on Pruitt’s security detail describe President Donald Trump’s first EPA head as habitually late for meetings and feeling entitled to use his motorcade to zoom around other cars, according to a newly released report.

The report — drafted by an agent in EPA’s Office of Criminal Enforcement, Forensics and Training, which oversees the administrator’s security detail, about a month before Pruitt resigned from the agency in 2018 — documents the frequent use of lights and sirens by Pruitt’s motorcade, egged on by the then-administrator himself.

“Can you guys use that magic button to get us through traffic?” Pruitt asked, one agent recalled.

Agents on the security detail were uncomfortable with the practice, believing those measures should only be taken during emergencies.

“Just because the Administrator makes himself late for an appointment, does not constitute us to arbitrarily turn on the lights and sirens to get him to his next appointment timely, to make up time,” an agent said. That agent also said it was awkward when Pruitt said “speed it up” and “we need to get there quicker.”

The agent told others serving on the detail to unplug the lights and sirens so when Pruitt asked to use them, he would be told they didn’t work.

In one episode described in the report, Pruitt was 35 minutes late to a staff meeting but directed he be taken to pick up his dry cleaning, using lights and sirens and driving against oncoming traffic. The agent said they believed it was “reckless,” but Pruitt’s urgency was “palpable” and they couldn’t refuse the order.

In another instance, an agent refused Pruitt’s order to use the lights and sirens, resulting in Pruitt being “visibly upset” and “silent for an uncomfortable time in the car.” A few days later, that agent was removed from their position, sending “a clear message” to the rest of the security detail that “if you didn’t perform the bidding of the Administrator, you would lose your job.”

The report found lights and sirens were used at Pruitt’s direction by agents who were uneasy disobeying the head of EPA.

“Their use has not been during emergency situations but to ease travel like turning across oncoming traffic, using excessive speed to expedite a trip or make a path through other motorists,” the report said.

It added that with increased media scrutiny, the use of lights and sirens by Pruitt’s motorcade was scaled back.

Pruitt’s penchant for having his security sound the sirens to beat Washington gridlock was widely reported in the press and referenced by lawmakers while he was in office. He even was asked about it during a May 2018 hearing.

“There have been reports that you encouraged the use of lights and sirens on your motorcade, even though there wasn’t an emergency,” then-Sen. Tom Udall (D-N.M.) said. “Is that true?”

“I don’t recall that happening,” Pruitt said. “There are the policies that the agency follows, the agents follow. And to my knowledge, they followed it in all instances.”

Udall also noted at the hearing a press report saying that after one of Pruitt’s agents protested the practice, that agent was removed from his position. In addition, the senator submitted an email for the record that said another security agent said Pruitt encouraged the use of lights and sirens when in transit.

Pruitt didn’t respond to messages from E&E News requesting comment for this story.

“This is the New York Times coming after me again,” Pruitt, who is currently running for Senate, said in a tweet earlier today. “This is clearly a politically motivated attack from the Times and their swampy allies. The left doesn’t want me back in Washington because they know I will reverse their terrible policies.”

The EPA report was released along with an Office of Special Counsel letter addressed to President Joe Biden. That letter, dated yesterday, detailed whistleblowers’ allegations about Pruitt’s mismanagement and excessive spending on security and travel while he was EPA administrator.

Kevin Chmielewski identified himself to E&E News as one of those whistleblowers described in the letter. He served as EPA deputy chief of staff for operations during the Trump administration and helped raise the alarm about Pruitt’s behavior.

Chmielewski said EPA has not recouped any of the misspent funds by Pruitt or held anyone accountable for the former administrator’s actions. He lamented what that said to future whistleblowers who were considering coming forward with their concerns.

“Great, everything I have said is true but nothing has been done about it,” Chmielewski said. “It’s kind of been a kick in the teeth.”

He has not been able to find another job in the federal government or on political campaigns, having worked on the advance team for Trump’s 2016 campaign. Instead, Chmielewski said he is running a small restaurant in his hometown of Berlin, Md.

One report found “excessive costs” of nearly $124,000 for Pruitt and his security detail’s first- and business-class flights. The watchdog office recommended EPA determine whether that money should be recovered, but the agency declined to do so.

Another report found EPA spent more than $3.5 million on Pruitt’s security detail without justification for his 24/7 protection. That was double the costs for his predecessors at EPA.

The EPA inspector general came up short in other instances. Investigations into Pruitt’s lease of a Capitol Hill condo tied to a lobbyist with business before the agency and having his EPA aides perform personal tasks for him, like trying to secure his wife a Chick-fil-A franchise, were deemed “inconclusive” after Pruitt resigned, according to another report.

Pruitt, who was elected twice as Oklahoma’s attorney general, is now running to succeed Sen. Jim Inhofe (R-Okla.). His campaign also didn’t respond to questions for this story.

Pruitt has leaned in on his troubled EPA tenure and responses to it from the media and others as an asset in the race.

“I was a guy to get things done on some of the most transformative issues in the administration the first few years,” he said on the “Hugh Hewitt Show” last month (E&E Daily, May 3).

Pruitt added, “It was just one aspect of changing the direction of an agency that was obviously a bastion of the American left, used as a tool and a weapon against all forms of producers in the U.S.”

Pruitt first will have to prevail in the June 28 Republican primary. A poll last month commissioned by a pair of Oklahoma television stations had him in fourth place in that contest, with just 3.3 percent of the vote.