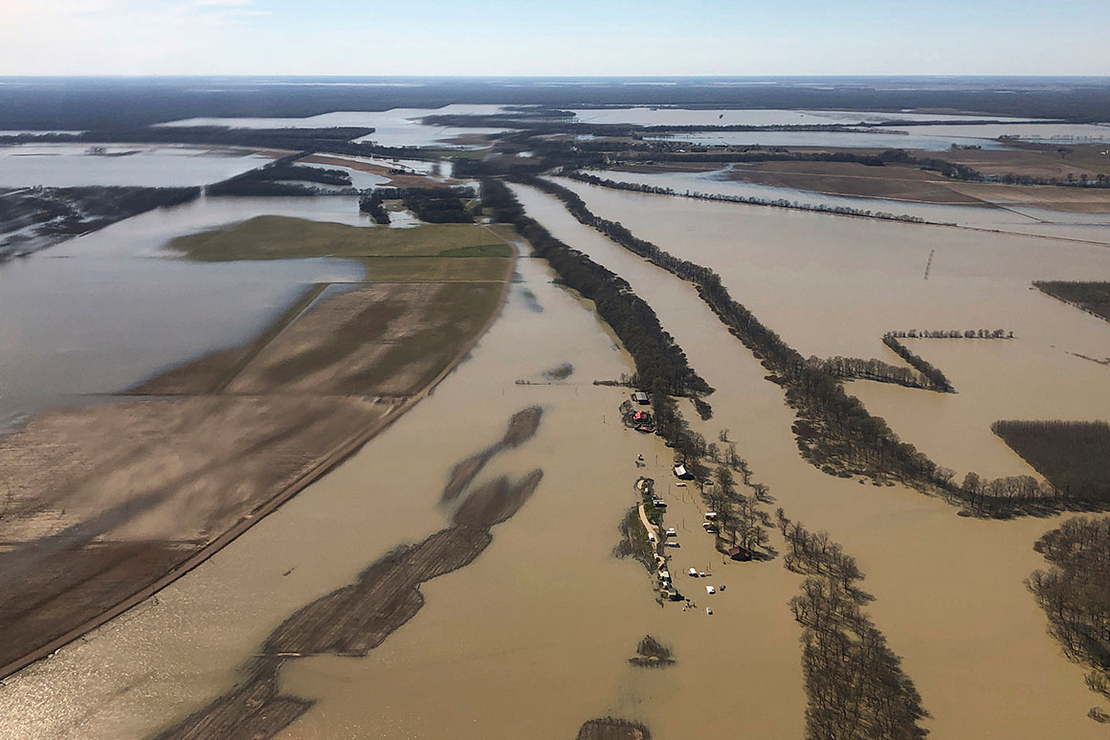 EPA senior scientists say they were shoved aside last year by Trump appointees racing to revive a massive Mississippi flood control project vetoed in 2008 by the George W. Bush administration, according to documents obtained by E&E News under the Freedom of Information Act.

In a Jan. 19 memo, the scientists said EPA political leadership failed to heed their warnings about the Yazoo Pumps project’s impact on a large swath of wetlands in the Mississippi Delta. The project, they said, failed to meet Clean Water Act requirements for protecting wetlands that provide wildlife habitat, filter pollution and buffer flooding.

At issue are changes EPA leaders made to a letter the agency sent to the Army Corps of Engineers last fall weighing in on the Corps’ draft environmental assessment of the project along the Yazoo River, a tributary of the Mississippi River.

Authorized by Congress in 1941, Yazoo Pumps — a combination of levees, flood gates and pumps — has been touted by proponents as a critical means of preventing frequent flooding of hundreds of thousands of acres in the Mississippi Delta. But critics say the pumps — the last part of the project to be built — would drain tens of thousands of acres of ecologically important wetlands.

The Yazoo project is a political lightning rod in Mississippi, where Republicans have argued that completing the pumps will offer flood relief to farmers and other landowners. The Trump administration met with the state’s governor and congressional delegation multiple times to discuss the project. And in recent weeks, Mississippi Republican Sens. Cindy Hyde-Smith and Roger Wicker, who advocated for the pumps to proceed, secured more than $20 million in an energy and water spending bill (E&E Daily, Aug. 5).

Conservation groups responded with legal action in January, suing EPA in an attempt to block construction of the pumps.

The project is slated to cost $220 million and take four years to complete.

But the Trump administration about-faced on the project, saying a revised design complied with federal law and the veto no longer applied.

EPA has issued only 13 vetoes during its history and modified only four — usually for small changes. The Army Corps gave its final approval for Yazoo Pumps on Jan. 15 — five days before President Trump exited the White House (E&E News PM, Jan. 15).

The Corps declined to comment for this story, citing ongoing litigation.

EPA spokesperson Timothy Carroll said the documents show the “previous political team directed a policy outcome that did not reflect the career technical staff recommendations.” He said the Biden administration will follow science and the law to protect wetlands and waterways.

“The agency is committed to better understanding the complex situation on the ground in Mississippi and working with its federal, state and local partners to develop protective and feasible solutions to address flooding in this area,” he said.

EPA career scientists in their Jan. 19 memo outlined how they believed the agency’s leadership ignored their concerns.

The Trump administration’s move to revive Yazoo Pumps began in April 2020, when the Army Corps’ Vicksburg District announced its intention to conduct a second final supplemental environmental impact statement, or FSEIS, for the project — essentially taking another look at the 2007 assessment that preceded EPA’s veto.

EPA provided scoping comments to the Corps last summer, and in mid-October the Corps issued a draft SEIS and announced it would take public comment through the end of November.

EPA scientists said they reviewed the draft, provided briefings to senior managers and then wrote a draft letter on the project, which documents show was sent to high-ranking agency officials.

“The final version of EPA’s 2020 DSEIS comment letter, which was not vetted by EPA career scientists prior to issuance, included changes made by or directed by EPA senior leadership that resulted in significant inaccuracies and omissions in the 2020 DSEIS comment letter EPA issued on November 30, 2020,” Palmer Hough, a scientist in EPA’s Office of Wetlands, Oceans and Watersheds, and William Ainslie, a wetland scientist in the Region 4 office in Atlanta, wrote in the memo.

David Ross, who was then leading the Office of Water, declined to comment for this story.

Another Trump appointee, Mary Walker, who was then Region 4 administrator, also declined to comment on the memo. She is now executive director of the Gulf Coast Ecosystem Restoration Council.

Another political appointee was Lee Forsgren, who was the deputy assistant administrator in the Office of Water at the time. Forsgren, now counsel at the consulting firm HBW Resources, said in a statement that the Jan. 19 memo was only a “small part” of the total record of decision on the Yazoo projects, and that the pumps are critical to protecting people in the Mississippi Delta from the types of flooding they’ve seen over the past decade.

“The types of solutions proffered by the environmental community and referred to in the memo would have devastating economic consequences for the residents of the Delta, especially for environmental justice communities and communities of color,” Forsgren said.

The scientists — Hough and Ainslie — said their comments and concerns weren’t incorporated into a Nov. 30 letter that Walker sent to the Army Corps that declared the Yazoo project was no longer subject to the 2008 veto.

EPA spokesperson Carroll said the final version of the letter was directed by political appointees.

“EPA career scientists were deeply disturbed by the changes made to the 2020 DSEIS comment letter EPA issued on November 30, 2020,” Hough and Ainslie wrote. “It is important for EPA’s comments to accurately reflect EPA’s record regarding the Yazoo Pumps project as well as capture major concerns regarding the recent analysis of this project.”

Shortly before the comment period closed last November, Hough and Ainslie said the Army Corps forwarded its final SEIS for the proposed Yazoo project to EPA. According to the memo, “virtually none” of the concerns they had raised in their letter on the draft SEIS had been addressed.

“This is not surprising since [the Army Corps] did not leave itself adequate time to complete a meaningful review of the comments it received on the 2020 DSEIS let alone time to make necessary revisions to the 2020 FSEIS,” they wrote.

EPA career scientists again drafted a response letter to the final SEIS and sent the remarks to management to share with senior leadership on Jan. 6, five days before the public comment period ended.

But EPA leaders decided not to send a letter to the Corps for consideration by the Jan. 11 deadline. Four days later, the agency approved the Yazoo project.

While heavily redacted, the documents obtained by E&E News show the wide variety of concerns EPA scientists have with Yazoo Pumps.

After EPA initially declined to release the documents, E&E News appealed that decision and won.

The career staffers specifically raised concerns with EPA’s review of the Yazoo project under Section 404 of the Clean Water Act, through which the agency regulates the discharge of dredged or fill material into waters of the U.S.

Similarly, they objected to the Army Corps’ record of decision, which the scientists said failed to comply with the regulations the agency must follow before moving forward with a project.

In approving the project, the Trump EPA highlighted differences in the new proposal, including moving a planned pump station 8 miles upstream and having it run on natural gas instead of diesel. Another change is that low-flow groundwater wells would be installed adjacent to the Mississippi River levee and upstream of the Yazoo study area (Greenwire, Jan. 11).

But the scientists faulted the Corps for failing to reformulate or reexamine alternatives, which they said is critical to identifying the “least environmentally damaging practicable alternative,” as is required under the Clean Water Act.

They also highlighted the Fish and Wildlife Service’s long-standing concerns about the project’s potential effect on an endangered plant, pondberry, which is found in only a handful of Southern states.

The scientists also warned that thousands of acres of wetlands could be degraded if the project moves forward, noting that the final supplemental environmental impact statement shows “direct impacts to wetlands and other waters are more than four times larger at the new site.” Clean Water Act guidelines, they said, prohibit discharges that cause or contribute to significant degradation of an ecosystem.

Compared with the 2007 proposal that would have directly affected 43 acres at the pump site, the scientists said the new proposal would have a direct effect on 193 acres of wetland and other waters, as well as triggering changes in the frequency and duration of flood events for potentially more than 69,000 acres of wetlands in the Yazoo Backwater Area.

“These impacts will degrade the ability of affected wetlands to perform important ecological functions, including habitat support functions for fish and wildlife,” they wrote.

The scientists also took issue with the Army Corps’ mitigation plan and said the agency is required to provide a plan that’s as detailed and specific as would be required by a private property owner applying for a Section 404 dredge and fill permit.

Specifically, they noted Clean Water Act guidelines require mitigation plans be based on specific sites, but the compensatory plan included in the 2020 FSEIS calls for the reforestation of thousands of acres of farmland that had yet to be identified.

“The proposal relies on the ability to secure sites in the future from willing landowners in locations where flood frequency and duration will be unaffected by the pumps project,” they wrote.