Trump EPA poised to allow year-round E15, but will it sell? 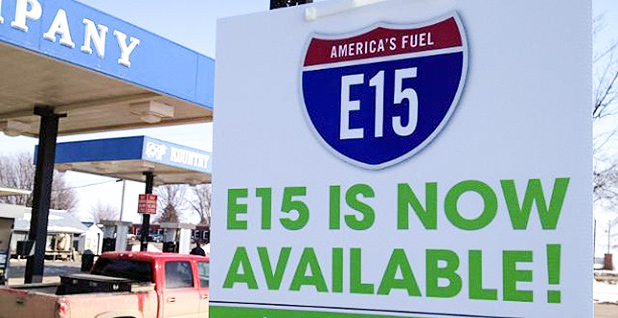 The move — beginning with a reported announcement tomorrow — may not translate quickly into a flood of the fuel at the pump, industry sources say. But the public relations wave is already building.

Pro- and anti-E15 forces have been gearing up for weeks for the expected announcement that Trump will order EPA to waive air-pollution-related seasonal restrictions on E15.

On one side, ethanol industry groups say companies that offer E15 at some of their gas stations will look to add it at others soon. Stations turned off by having to change labels during the year will suddenly find E15 attractive and easier to sell, they say.

On the other, petroleum interests are pushing the message that E15, at 15 percent ethanol, isn’t good for many car engines or for standard pumps and other equipment at gas stations — and that the product isn’t likely to catch on fast in the 21 states where it already isn’t available.

"We miss five months of peak season," said Mike O’Brien, vice president of market development at Growth Energy, an ethanol trade group that has been pressing for E15 for several years. "We’ll see sales reviving during that peak season."

At the forefront of E15 sales are companies such as Sheetz Inc., with a heavy presence in Pennsylvania, Ohio and Virginia. The company sells E15 at around 200 locations, making it the biggest E15 retailer in the country.

O’Brien said year-round sales will help Sheetz meet a goal of selling E15 at 90 percent of its stations within a few years and should increase availability from companies operating in states like Texas and the Dakotas. E15 sells for 3 to 10 cents less per gallon than regular gasoline, which is 10 percent ethanol.

Sheetz’s vice president of petroleum supply, Mike Lorenz, told the Senate Environment and Public Works Committee in 2016 that the company loses about 40 percent of its customer base after June, when the E15 restrictions take effect.

In Iowa, the heart of the ethanol industry, a total of 166 stations sell E15, out of 2,000 gas stations statewide, according to the Iowa Renewable Fuels Association.

Companies such as QuikTrip Corp., which doesn’t sell E15 in Iowa, will probably look to do so once it’s allowed year-round, said Cassidy Walter, a spokeswoman for IRFA. Others with limited locations there will expand, she said.

Expanded availability of E15 is a top regulatory priority of pro-ethanol groups, including farm organizations such as the National Corn Growers Association. Corn is the main feedstock for ethanol, which is mixed into gasoline to meet the federal renewable fuel standard.

That has turned ethanol into a big issue in farm country, where incomes have been falling and trade wars have spooked farmers who rely on overseas markets. President Trump has been looking to shore up support there.

Groups opposed to E15, however, point to its corrosive effects in some engines. Cars built before the early 2000s weren’t designed to burn it, they say, and drivers might accidentally put it in their cars despite warning labels on pumps.

As many as three-quarters of vehicles aren’t compatible with E15, said Frank Macchiarola, director of downstream and industry operations for the American Petroleum Institute, during a conference call with reporters.

"The administration should step back a bit," Macchiarola said.

The Renewable Fuels Association (RFA), an ethanol industry group, countered that the vast majority of cars — as many as 90 percent — are approved by EPA for E15 use, because they were built after 2001.

Petroleum industry groups also say the nation’s infrastructure of storage facilities and pumps isn’t ready to take on a big increase in E15.

The National Renewable Energy Laboratory and Underwriters Laboratories found in tests that 70 percent of equipment in use, and 40 percent of new equipment, failed E15 compatibility tests, the Petroleum Marketers Association of America told the Senate EPW Committee in a June 2017 letter.

PMAA said lifting seasonal limits without further testing could put an unfair burden on retailers, given potential risk to storage and distribution equipment. But RFA said those fears are exaggerated, citing a 2013 study by the Petroleum Equipment Institute that found retailers have inexpensive options, including retrofits of less than $4,200 on average.

"There are laws and regulations that will keep retailers from using unapproved, or non-compatible equipment, at multiple levels both state and federal," said Robert White, RFA vice president of industry relations, in a statement.

White added, "If the opposition would step out of the way, infrastructure upgrades could and would happen in time to support higher blends."

If nothing else slows down the growth of E15, legal wrangling might. Opponents of ethanol mandates say they don’t believe EPA has authority to lift the restrictions without congressional action.

"We intend to keep our legal options on the table," Macchiarola said.