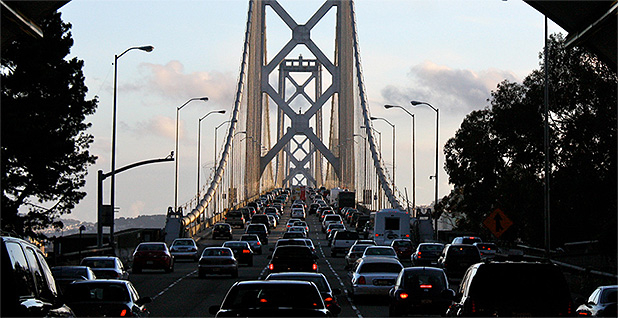 The Trump administration is planning to make an announcement tomorrow about California's emissions deal with automakers. Bruno Sanchez-Andrade Nuno/Flickr

The Trump administration is planning to formally propose blocking California’s ability to enforce its own greenhouse gas emissions standards for cars.

The move would further escalate an ongoing feud between President Trump and the Golden State. The Trump administration has been working to relax vehicle fuel efficiency and greenhouse gas standards, and California officials, including Gov. Gavin Newsom (D) and Attorney General Xavier Becerra (D), have worked continuously to stop it.

EPA Administrator Andrew Wheeler mentioned the issue in a speech this morning to the National Automobile Dealers Association — which favors both revoking California’s waiver and the administration’s proposal to roll back federal standards — but wasn’t specific.

"We embrace federalism and the role of the states, but federalism does not mean that one state can dictate standards for the nation," Wheeler said, according to his prepared remarks.

"So we will be moving forward with one national standard very soon," he said. "We will be taking joint action with the Department of Transportation to bring clarity to the proper — and improper — scope and use of the Clean Air Act preemption waiver."

The action, if made final, will almost certainly spur California to sue the administration.

California’s authority over tailpipe emissions was written into the 1970 Clean Air Act as recognition that the state’s oversight of automobile pollution predated the federal law.

Under a 2009 policy from President Obama, California was given authority to use the law to curb greenhouse gases. So far, the Trump administration has only discussed revoking it for greenhouse gases, while allowing the state to retain it for other pollutants.

California’s standards have matched the federal ones since it was granted the waiver, but the state plans to retain its rules if the federal government rolls back the nationwide ones.

The Trump administration first proposed to revoke California’s waiver last year when it released the Safer Affordable Fuel-Efficient Vehicles Rule, which would freeze federal efficiency and greenhouse gas rules in 2021 and cancel the Obama administration’s plans to make them stricter through 2026.

The administration has floated the idea of separating the revocation of California’s waiver from the larger rollback but had not committed to the strategy (E&E News PM, Sept. 5).

"It’s safer, and it’s less expensive by $3,500 on average. And California wants you to do the other cars. And we don’t," Trump said at a campaign rally yesterday in New Mexico. "We’re going to end up in big litigation. And I’m fighting for you."