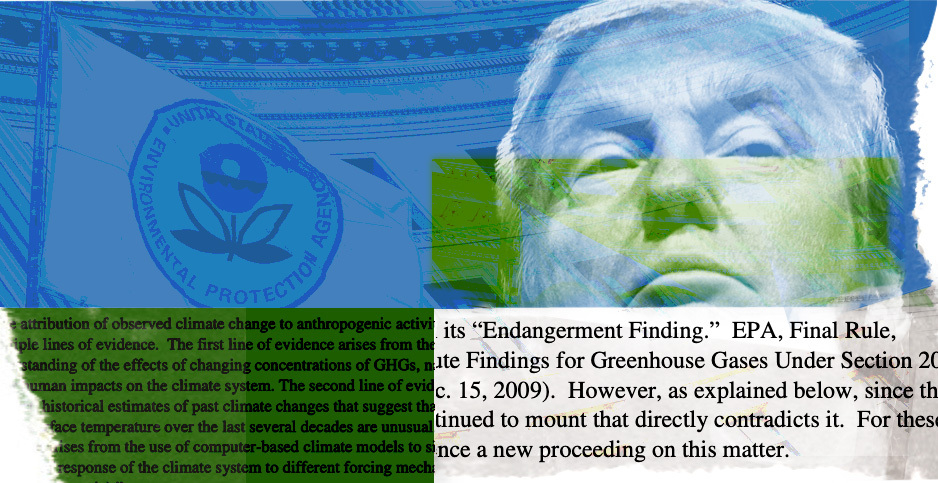 With just days remaining for the Trump administration, EPA reviewed the agency’s foundational ruling that underpins its climate change rules.

Yet in a surprising turn for an administration known for dismissing climate fears, the agency denied calls to overturn the decision the day before President Trump left office.

Top officials then at EPA considered petitions by conservative allies to toss the agency’s endangerment finding on greenhouse gas emissions, according to records obtained by E&E News. That decision, issued in 2009, found that six greenhouse gases including carbon dioxide and methane threatened public health and has been the basis for EPA rules to reduce emissions by cars, trucks and power plants.

Late at night on Jan. 12, Adam Gustafson, then a deputy general counsel at EPA, emailed ethics officials to see if he could weigh in on a petition by the Competitive Enterprise Institute. Gustafson had joined the agency during the last year of the Trump administration from Boyden Gray & Associates, where the conservative think tank had been his former client.

"CEI petitioned EPA to reconsider a regulatory action, and I have been asked whether I can work on the Agency’s response," Gustafson said. He was then told he would need an ethics ruling to participate.

In an email sent close to 1 a.m. the following day, Gustafson said he would like such a ruling, adding, "The matter is a CEI petition for reconsideration of EPA’s 2009 Greenhouse Gas Endangerment Finding," sharing a link to CEI’s request, which was dated from 2017.

One ethics official commented among a series of emails that "time is of the essence" so Gustafson could work on the petition. He and other Trump appointees were leaving the agency soon after; his resignation letter pinned his exit at noon on Jan. 20, which is when the Biden administration took charge.

Gustafson did receive an impartiality determination signed on Jan. 14. That built on a waiver from Trump’s ethics pledge that Gustafson had already secured last June to work on climate change litigation that involved CEI.

Soon enough, EPA responded to CEI and others’ petitions to reopen the endangerment finding.

Then-Administrator Andrew Wheeler said in a letter to the four groups behind the requests that the agency had rejected them.

"For the reasons discussed in the enclosed response, the EPA denies your petitions," Wheeler said in the letter dated Jan. 19. He thanked them for their "interest in these issues" and said EPA looked forward to working with them "as we continue to protect human health and the environment in accordance with law."

The agency’s response noted that EPA had issued several rules that relied on the endangerment finding, including Trump-era regulations like the Affordable Clean Energy rule and the Safer Affordable Fuel-Efficient (SAFE) Vehicles Rule. In addition, the finding was based on scientific research by the U.S. Global Change Research Program and the Intergovernmental Panel on Climate Change on the dangers of greenhouse gas emissions.

"Upon consideration of the four petitions, the EPA concludes that they present insufficient information to warrant revisiting the 2009 endangerment finding," the response said in denying the petitions.

"Since our filing, CEI staff have requested, on a number of occasions, that EPA act on our petition," Sam Kazman, the think tank’s general counsel, said in a statement shared with E&E News. "CEI continues to maintain that the 2009 endangerment finding should be reconsidered in light of the new scientific developments cited in the petition that cast doubt on its conclusions."

Others denied by EPA were not pleased.

"It was a ludicrous and utterly false statement to say that our petition did not submit sufficient information to revisit the endangerment finding," said Harry MacDougald, one of the attorneys for the Concerned Household Electricity Consumers Council, whose petition was rejected.

Asked for his thoughts on EPA’s waiting until the last full day of the Trump administration to deny the group’s petition, MacDougald told E&E News, "If you want a friend in Washington, get a dog."

“If the reconsideration, if it had in fact gone against the endangerment finding, it would have pulled the rug out of all EPA’s climate change regulations.”

Former EPA officials told E&E News that exiting administrations often push out a number of prized items during the lame-duck period after Election Day. The Trump EPA had been on a tear, too, releasing a series of rules in its last days. Yet choosing to defend the endangerment finding, long a target of EPA’s conservative critics, seemed out of character for the Trump team.

Jon Cannon, who served as EPA general counsel during the Clinton administration, said most actions by Trump were to undercut climate rules.

"Here’s a decision that seems to defend the science and the validity of regulating greenhouse gas emissions," said Cannon, now a University of Virginia law school professor.

Kevin Minoli, formerly EPA’s acting general counsel and top career lawyer, said a lot of things get done on Jan. 19, the day before an administration leaves.

"Here, you cannot argue that denying the petition was an administration priority, so it is most likely that the outgoing administration was inspired to act by the transition happening the following day," said Minoli, now a partner at Alston & Bird.

The Trump appointees’ motives for not reopening the endangerment finding remain unclear.

Cannon, when at EPA, wrote in a 1998 memo that the agency had broad authority under the Clean Air Act, including to regulate carbon dioxide, which helped lead to the Supreme Court’s landmark Massachusetts v. EPA decision in 2007 and the agency’s subsequent endangerment finding. Cannon warned that if that finding were ever revoked, the agency would lose its power to regulate greenhouse gases.

"If the reconsideration, if it had in fact gone against the endangerment finding, it would have pulled the rug out of all EPA’s climate change regulations," Cannon said.

EPA’s denial of the endangerment finding petitions has been short-lived. Administrator Michael Regan, short of two weeks in the job, pulled back that dismissal and is now planning a new response.

"I am withdrawing the denial of your petitions as the response does not provide an adequate justification for the denial," Regan said in a March 23 letter sent to CEI. "The EPA therefore intends to reassess the petitions and to issue a new decision in due course."

EPA’s endangerment finding remains, but without it, much of President Biden’s climate agenda would stall. Regan has talked about "the climate crisis" and has pledged aggressive action by EPA against greenhouse gas emissions, a sharp turn from the prior administration.

Cannon said the agency, now under the Biden administration, may want to craft a stronger rejection to calls to overturn the endangerment finding.

"Rescinding that denial suggests they thought it was insufficient," Cannon said. "Therefore, they might be taking it back to perfect it."

An EPA spokesperson told E&E News that the agency intends to review the petitions and provide a new decision.

"Per the Biden-Harris administration’s executive orders and other directives, EPA is reviewing all of the agency’s actions issued under the previous administration," said the agency spokesperson.

As soon as Trump took office, conservative groups began to file petitions to EPA to reopen the endangerment finding. Yet they were left waiting for a response until the very end of his administration.

Robert Henneke, general counsel for the Texas Public Policy Foundation, one of the groups denied, said he wasn’t taken aback by the decision.

"Given that the petition had been pending without action for three years at that point, I don’t recall that we were surprised by the denial, and assumed that the timing related to the administration completing its pending business," Henneke told E&E News.

But the organization is looking again to force action from EPA on the endangerment finding. Last month, it filed a lawsuit in the U.S. District Court for the Eastern District of California over Regan’s withdrawal of the denial.

"The withdrawal of the denial put us back in the prior limbo of no action occurring on our petition. I seriously doubt that EPA withdrew the denial in order to address the endangerment finding issue on the merits," Henneke said. "Rather, this appears to have been an attempt to further delay any action on the issue."

It’s not clear if CEI, which had been denied by EPA, too, is planning to sue. Travis Burk, a CEI spokesperson, told E&E News that the group doesn’t comment on internal deliberations.

MacDougald said he wasn’t planning to file a lawsuit against the agency.

"We are still working on our review, so it would be premature to discuss the outcome at this point," said the EPA spokesperson.