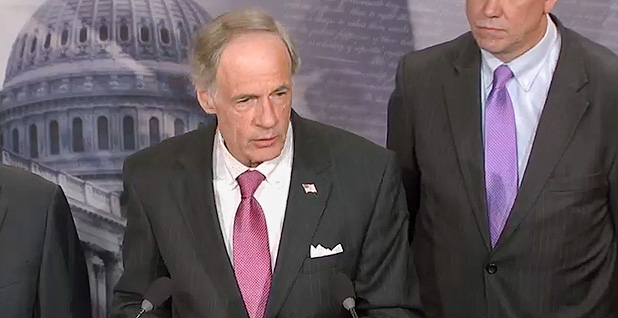 Two GOP lawmakers from South Florida who have urged their party to be more accepting of climate science bucked the administration’s sweeping directive on "energy independence" and called on Trump to consider the impact man-caused warming is having on sea-level rise, ocean acidification and coral reefs.

Rep. Carlos Curbelo (R-Fla.), co-founder of a bipartisan caucus that is focused on legislative approaches to mitigation and adaptation, said the rollback of emissions standards was "misguided." Rep. Ileana Ros-Lehtinen (R-Fla.) declared it "troubling" and a backward step.

"Weak environmental policies ultimately lead to the destruction of jobs and quality of life. I hope the Administration will work with me and my colleagues in the Climate Solutions Caucus to Act on this in a responsible, bipartisan way going forward, but today that is clearly not the case," Curbelo said in a statement.

Democrats vowed to defend U.S. EPA’s efforts to regulate greenhouse gases and said they would try to uphold funding for the agency during the upcoming appropriations process.

They are also planning to introduce a bill to rescind the executive order Trump signed that makes good on his campaign trail pledge to unravel Obama-era plans to curtail global warming.

But they predicted most of the fight over the Clean Power Plan will play out in court.

"The heart of the battle is going to be litigation," Sen. Sheldon Whitehouse (D-R.I.) — a former state attorney general — told reporters.

Last night, the Justice Department asked the U.S. Court of Appeals for the District of Columbia Circuit to halt litigation over the rule as EPA works through Trump’s executive order.

Separately, Sen. Chris Van Hollen (D-Md.) announced he would reintroduce legislation that would revive a carbon cap-and-dividend proposal he championed as a member of the House (Greenwire, Feb. 24, 2015).

"President Trump is either ignorant to the basic facts of climate change, or he is willfully poisoning our atmosphere to benefit Big Oil and wealthy special interests. The health and prosperity of all Americans is at risk," Van Hollen said yesterday. "We must fight back, and I plan to reintroduce the ‘Healthy Climate and Family Security Act’ this spring as part of that effort."

The legislation is similar to a proposal pitched to the White House in February by a group of senior Republican statesmen. That plan would tax carbon dioxide at the source — an oil refinery, for instance — then return the revenue directly to taxpayers in the form of a dividend check (Greenwire, Feb. 8).

Supporters of the idea are optimistic that Trump’s "repeal-only climate strategy" will provoke significant backlash from the American public.

They point to polling that shows majorities of people in every congressional district support setting strict limits on CO2 (Greenwire, Feb. 28).

"At that point Republicans will be looking for a replacement plan — that is how we are positioning our plan," said Ted Halstead, founder of the Climate Leadership Council, which coordinated the carbon fee-and-dividend outreach to the West Wing.

But Republicans for the most part didn’t seem worried about negative reaction to Trump’s directive.

Rep. Tom Reed (R-N.Y.), one of the co-sponsors of a GOP resolution acknowledging the threat of global warming and calling for action to address it, said he believes Trump’s intent is to put some type of "reasonable standard" in place.

Reed said his constituents support a "much more reasonable cost-benefit approach" to addressing climate than President Obama’s Clean Power Plan and other initiatives.

"They say we’ve got to solve this problem, but we have to do it in a much more rational way," Reed told E&E News, pointing to tax incentives for clean energy technologies as one policy prescription.

Sen. Lindsey Graham (R-S.C.), who has urged his party to work to find policy compromises to reduce greenhouse gas emissions, told E&E News that he was "OK" with Trump’s directive.

Other moderates, such as Sens. Lamar Alexander (R-Tenn.) and Jeff Flake (R-Ariz.), sidestepped questions on the sweeping order, saying they had not had the chance to review it in depth.

"Whenever we can get rid of regulation and be more energy independent, it’s a good thing," Flake said.

The lawmakers who most closely align with Trump on energy issues, a handful of whom attended the signing ceremony for the executive order at EPA headquarters, were heartened by his pledge to help revive the ailing coal industry.

Sen. Steve Daines (R-Mont.) said he didn’t believe the president’s new approach on these issues was a "trade-off" between energy development and environmental protections.

"This gets back to having a balanced approach here," he said yesterday during a conference call with reporters. "We can be pro-clean air, pro-clean water, and you can be pro-responsible natural resource development."

Daines, who is chairman of the Senate Western Caucus, said that he’d "spent a lot of time listening" to his constituents on the issue and that "most Montanans" believe there needs to be a balanced energy portfolio that includes coal, oil and natural gas, but also hydro, wind and solar power.

"Coal keeps the lights on, literally and figuratively," in Montana, Daines said, saying it would be "devastating" to the state’s economy to lose the tax revenues and jobs that come with energy production.

"Without a vibrant energy industry and the jobs it provides, the tax revenue it provides, our state could turn into a place that only the rich and famous will be able to recreate in," said Daines. "And the average mom and dad who wants to buy that elk tag at Walmart will no longer be able to live in Montana."

Rep. Kevin Cramer (R-N.D.) said that in a divided country there is bound to be disagreement over energy policy, but the public would likely be "very pleased" by the results of the executive order.

It directs each federal agency to identify rules and policies that "potentially burden the development or use of domestically produced energy resources, with particular attention to oil, natural gas, coal, and nuclear energy resources."

Cramer suggested there could still be a "reasonable way" to work on emissions reductions.

"But I think to sort of wipe the slate as clean as we can by eliminating unreasonable regulations and then start the more collaborative process — I think people will like what they are seeing," he said in an interview.

Rep. Joe Barton (R-Texas) stopped shy of criticizing Trump for taking what some conservatives consider to be a more moderate approach to the Obama administration’s climate policies than they expected (Greenwire, March 28).

Barton sides with those who want EPA Administrator Scott Pruitt to target the 2009 endangerment finding that allows the agency to regulate greenhouse gases under the Clean Air Act.

"I told somebody at EPA just when I went to the signing that they ought to really take a look at the endangerment finding that the Obama administration issued when they first got in office," Barton said. "I think it’s very flawed and should be at a minimum revisited."