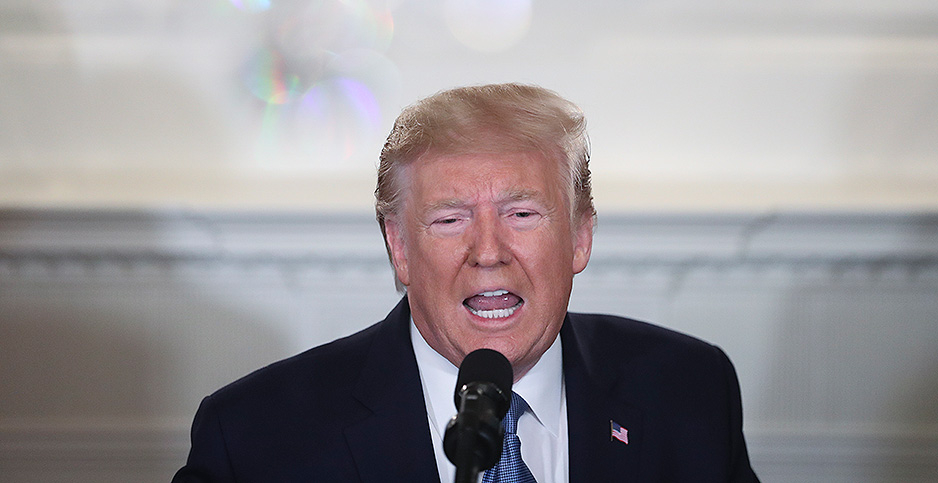 The Trump administration yesterday broadened its campaign to neutralize California’s political leadership on climate change, this time by taking aim at its global influence.

EPA and the Department of Justice have maneuvered for months to undercut California in its efforts to challenge President Trump’s agenda at dismantling rules to address climate change.

The agencies worked in unison to impair the state’s historic role in setting stronger-than-federal standards for vehicle greenhouse gas emissions. When California negotiated a deal on vehicle efficiency with four major car manufacturers, DOJ filed an antitrust lawsuit. EPA, meanwhile, threatened it with the loss of highway funds, alleging that California had shirked regulations on air pollution.

Critics have accused Trump of treating California like a rival political power to be crushed rather than the most populous state in the country.

"Whether it’s happening on the West Coast or in Eastern Europe, this president is engaged in an abuse of power to punish a political enemy," said Sen. Tom Carper of Delaware, the top Democrat on the Environment and Public Works Committee.

The Department of Justice launched another salvo yesterday in the administration’s campaign against California and its climate policies. It sued the state in an effort to suspend California’s partnership with Quebec, a Canadian province, that formed a cross-border carbon dioxide cap-and-trade system.

The state and province say they’re connected by a memorandum of understanding and they stress that it’s voluntary. But Jeffrey Bossert Clark, who heads DOJ’s environment division, said that by going around Washington to deal directly with Quebec, California had "veered outside of its proper constitutional lane to enter an international emissions deal."

"The power to enter into such agreements is reserved to the federal government, which must be able to speak with one voice in the area of U.S. foreign policy," said Clark in a statement. "California’s unlawful cap-and-trade agreement with Quebec undermines the president’s ability to negotiate competitive agreements with other nations, as the President sees fit."

Stan Meiburg, a former career official at EPA who served as deputy regional administrator for the agency in Texas, said DOJ’s involvement in targeting California is unusual.

"Actually it’s quite disturbing because it suggests that the legal authority of the Justice Department is being mobilized to find just about anything they can do to put pressure on the state of California when it’s a matter that would affect climate change," he said.

The DOJ suit filed yesterday wouldn’t make or break the California cap-and-trade program. Quebec is a relatively small player in California’s market, in part because its heavy reliance on hydropower limits its own emissions.

But the complaint filed with the U.S. District Court for the Eastern District of California made the case that California’s independence, and in particular its governors’ criticism of Trump’s climate policies and his choice to leave the Paris Agreement, could compromise America’s ability to "speak with one voice."

A section of the filing titled "California’s Foreign Policy" goes back to 2006, when former Gov. Arnold Schwarzenegger, a Republican who has criticized Trump, likened his state to ancient Greek city-states Athens and Sparta. DOJ mentions that then-British Prime Minister Tony Blair was standing "by his side" when Schwarzenegger compared his state’s economic and technical influence to that of a "nation-state."

The filing also details California’s international collaborations since Trump announced plans in 2017 to withdraw the United States from the Paris Agreement "in part because it favors China." The lawsuit also highlights former Democratic Gov. Jerry Brown’s work to undercut Trump’s decision on the Paris Agreement by traveling to China and connecting with foreign political leaders.

Allowing a deal like the California-Quebec partnership to exist, it states, would "undermine the United States’ ability to negotiate competitive international agreements."

It’s unclear what kind of agreements Clark and his team have in mind or how the Canada-Quebec partnership would compromise it. The DOJ filing mentions Massachusetts v. EPA, a 2007 Supreme Court ruling that determined EPA must regulate greenhouse gases under the Clean Air Act if they endanger human health. The Supreme Court decision also ruled that states must "surrender" the prerogative to deal with foreign entities on climate as a condition of being in the union. DOJ’s filing claims that extends to MOUs like this one.

Clark and his team reminded the courts that Trump in his 2017 White House Rose Garden speech announcing the Paris withdrawal raised the prospect that he might renegotiate a new climate deal. But there’s no evidence the president or anyone in his administration has seriously approached another country to initiate one, and most countries have said they wouldn’t be interested.

Trump is expected to send a letter to the United Nations early next month that would begin a one-year countdown to the U.S. withdrawal from Paris.

"Let’s face it, the federal government is clearly not occupying the climate leadership space at the moment," said Vicki Arroyo, executive director of the Georgetown Climate Center, who served on a committee that helped set up California’s climate program. "It’s not like this California program is interfering with any federal leadership."

California has been busy filling the void on climate leadership ever since Trump announced the U.S. withdrawal from Paris. It has spearheaded coalitions of subnational actors committed to the goals of Paris, and in 2018 it hosted a quasi-U.N. climate summit in San Francisco to support the global deal.

Ken Alex, a senior adviser to Brown who is now a law professor at the University of California, Berkeley, said the former governor and his staff got no pushback from Washington, D.C., before or after that conference.

"Obviously there’s been tension," said Alex. "But to be honest, California has been very careful not to step on the federal government’s toes while still moving forward with its own policies."

Alex said memorandums of understanding like the partnership with Quebec on carbon trading are arranged on a voluntary basis and are akin to a state promoting its exports abroad or taking other steps to advance its economic interests.

And he said it was usually foreign partners who reach out to California and not the other way around, especially since Trump took office.

"It has international identity," he said. "And countries and subnationals want to have a partner in the United States, and in the absence of the federal government, I think many of them have reached out to California and are interested in connecting. And I think California has been open to that."

California officials have long been attuned to the legal dangers posed by its partnership with Quebec, said Michael Wara, a law professor at Stanford University’s Precourt Institute for Energy.

The state’s cap-and-trade system came in the wake of a 2003 U.S. Supreme Court case in which the state lost its bid to help Holocaust survivors collect on insurance claims held by European underwriters. California attempted to bar insurance companies from operating in the state unless they disclosed information about policies issued between 1920 and 1945. The court ultimately struck down the law, saying it prevented the federal government from speaking with one voice on foreign affairs.

California took the loss to heart in development of its partnership with Quebec, Wara said, and ensured the MOU would fall short of a treaty.

Yet there are elements of the MOU that could be painted as treaty-like, particularly around withdrawal, he said. The MOU calls on a transition period in the event a participant exits the agreement, a feature designed to protect businesses that had bought carbon credits from finding themselves holding a piece of worthless paper.

There might be a bigger risk. Brown and other state leaders who talk openly about their aggressive climate goals, and their disdain for Trump, could prove more damaging.

"Appearances can matter in these things. I’ve had moments where I wished they were a little less out front on that for exactly this reason," Wara said. That’s particularly true since Trump appointments have shifted the balance of the court to the right.

California Gov. Gavin Newsom (D) has been more circumspect than Brown, who used his keynote remarks at the San Francisco summit to call Trump "a liar, criminal or fool, take your pick." In a statement yesterday, Newsom said that "the latest attack shows that the White House has its head in the sand when it comes to climate change and serves no purpose other than continued political retribution."

David Wright, a law professor at the University of Calgary who has studied the Quebec-California partnership, said the two governments had deliberately sought to thread the needle: establishing strong enough rules to form a viable market for trading carbon allowances, without violating U.S. constitutional constraints on states operating in foreign arenas.

The Trump administration would face a high bar in trying to prove the agreement amounted to a treaty, he said. When Ontario abruptly pulled out of the program following the election of a conservative premier last year, California and Quebec had no recourse to stop it.

"That shows you how much of a treaty it is," Wright said.