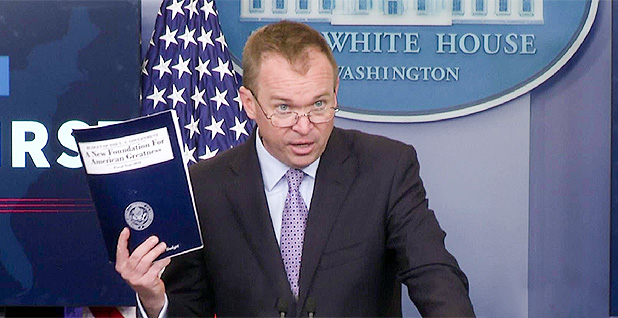 The White House’s fiscal 2019 budget, due out today, will outline plans for spending hundreds of billions of new dollars added by last week’s budget deal. Energy and environmental agencies and programs, however, are unlikely to be at the top of the list for new funds.

The Office of Management and Budget is set to release the blueprint at 11:30 a.m., with agencies and departments expected to provide more details later in the day and throughout the week.

Similar to fiscal 2018, the budget is certain to top $4 trillion in new spending with about a quarter of that counting as discretionary spending. Congress will allocate the money in the 12 annual appropriations bills.

President Trump said after last week’s accord was announced that his priority is spending the new dollars on the military.

"Without more Republicans in Congress, we were forced to increase spending on [domestic] things we do not like or want in order to finally, after many years of depletion, take care of our military. Sadly, we needed some Dem votes for passage," Trump tweeted.

Lawmakers eased stringent budget caps last week for fiscal 2018 and 2019 by agreeing to provide about $300 billion in new spending over two years, including about $141 billion for domestic programs with the rest for military and security.

OMB announced after the increase was approved that it would revise its budget request to reflect the increase and recommend where it wants the new dollars spent in fiscal 2018 and 2019.

One area where energy and environmental programs could gain some dollars is in the $20 billion of the domestic increase specifically marked for infrastructure projects over two years.

Lawmakers said a portion of those funds could go toward rural water infrastructure, clean and safe drinking water systems, and upgrading the nation’s energy grid.

But beyond one-time spending on infrastructure, energy and environmental agencies are bracing for renewed calls for cuts in their annual budgets.

At U.S. EPA, Trump seems likely to once again take aim at the agency he proposed slashing by nearly a third last year, a move Congress is expected to reject as it finalizes fiscal 2018 spending in coming weeks. But even if the cuts to the regulator are not as severe, some reductions are likely and agency employees will be closely watching to see how much is proposed for buyouts.

OMB Director Mick Mulvaney told Fox News, “You still are going to see some reductions in our proposals to the EPA,”

Interior Secretary Ryan Zinke said recently that this year’s budget request won’t be much different from last year’s, which called for reductions of about 5 percent. Those cuts targeted the Bureau of Land Management, the payments in lieu of taxes program, and the Land and Water Conservation Fund.

Some Interior spending could be prioritized for wildfire fighting and addressing the National Park Service’s growing maintenance backlog.

The budget could offer more details on Zinke’s plans for reorganizing the department into 13 regional hubs.

The Energy Department is bracing for steep cuts to the Office of Energy Efficiency and Renewable Energy, weatherization programs and loan guarantee programs. Lawmakers have already signaled they do not favor those cuts, and they ultimately could be reversed or limited by Congress.

Offsets used to pay for any increases could also target programs important to the energy and environmental community.

The administration could again propose savings from selling off more of the Strategic Petroleum Reserve, privatizing federally owned Western power systems and expanding the leasing of federal lands for energy exploration.

Stan Collender, a budget expert who teaches public policy at Georgetown University, said agencies should expect to see many of the proposed reductions offered last year recycled this year.

He said presidential administrations often propose new spending initiatives from year to year, but to pay for them they tend to target the same agencies and projects because there are limited options for finding new revenue.

Collender said he expects few of the steepest cuts to survive on Capitol Hill. He added, "The president’s budget does not need to be enacted, it just needs to be proposed."

Lawmakers will kick off the first several weeks of budget hearings in the coming days with Mulvaney appearing before both the House and Senate budget committees.