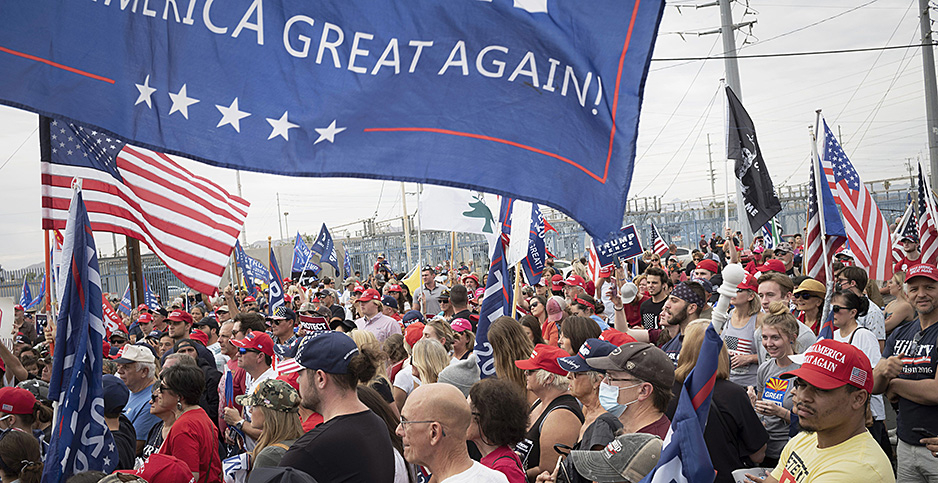 Supporters of President Trump contest early results in Arizona, in front of the Maricopa County Election Center on Nov. 6 in Phoenix. Arnaud Andrieu/SIPA/Newscom

Environmentalists and industry observers are watching the clock now that President Trump has lost his bid for reelection, anticipating a potential flurry of last-minute energy rollbacks, permitting decisions and new rules that could impinge on a Biden administration.

Several rules that could weaken energy efficiency standards, for example, are poised for final passage at the Department of Energy, and measures at the Interior Department that could affect oil drilling are in various stages of completion.

Trump has not conceded the race and shows no signs of doing so. His supporters say his administration should continue working full speed ahead.

"While the president and his legal team focus on their options with respect to the election, there is no reason his agencies should take a pause on finalizing as many pending actions as possible at the same time," said Tom Pyle, president of the American Energy Alliance, who led Trump’s Energy Department transition team.

Among the actions Pyle cited was a Labor Department rule released this month that makes it more difficult to use investment assets to address social issues such as climate change or racial justice (Climatewire, Nov. 2).

Other provisions that could be enacted before President-elect Joe Biden is inaugurated include a DOE rule that would allow showers to deliver a greater blast of water — which Trump has taken particular interest in, complaining that modern showerheads deliver only a trickle of water for him to wash his "beautiful hair properly." The Interior Department also could move on issues like seismic testing in the Arctic National Wildlife Refuge.

DOE is also likely to deliver a study that looks at what would happen to the U.S. economy if the government banned hydraulic fracturing. Trump ordered the study just days before the election that centered on Pennsylvania, where fracking has boosted the state’s economy.

Energy Secretary Dan Brouillette is expected to deliver the report to Trump within 70 days. DOE did not respond yesterday to a request for comment on the study. Biden’s campaign dismissed it as a campaign stunt (Energywire, Nov. 2).

Critics of Trump’s efficiency policies, meanwhile, say they are particularly concerned with a rule that they say would allow furnaces and water heaters that waste energy to remain on the market.

"This last-minute rule is designed to handcuff the Biden administration when it comes to improved standards for gas appliances including furnaces, boilers and water heaters, some of the products for which updated standards are most seriously needed," said Andrew deLaski, executive director of the Appliance Standards Awareness Project at the American Council for an Energy-Efficient Economy.

Efficiency advocates have had a long-running battle with the administration. Fourteen states sued DOE yesterday for what they say was failure to update 25 overdue efficiency standards for everything from commercial air conditioners and refrigeration systems to home appliances like microwaves.

The lawsuit filed in the U.S. District Court for the Southern District of New York follows a similar challenge led by environmental and consumer groups in that court late last month.

But anti-regulatory groups, including the Competitive Enterprise Institute, said improved, energy-efficient models should sell on their own merits and not require a government mandate.

"We hope that DOE carries through on its promise to truly protect consumers by respecting their freedom of choice," said Sam Kazman, general counsel at the Competitive Enterprise Institute, which has pressed the administration for changes, including a speedier model of dishwasher.

Trump has championed a deregulatory agenda, and observers say they plan to keep tabs on last-minute attempts to push through changes.

The State Energy & Environmental Impact Center at the New York University School of Law yesterday launched the Midnight Watch Project to track environmental and energy regulatory changes during the final days of the administration.

"Last-ditch efforts may already be underway to lock in the damage done over the past four years and preemptively hamstring sorely needed action to protect the environment and public health — they will not go unnoticed or unanswered," said David Hayes, a former Obama administration official and the center’s executive director.

At the Interior Department, the Trump administration is running out the clock on a potential oil and gas lease sale in the Arctic National Wildlife Refuge (ANWR) but technically could still schedule the auction.

The Republican-led Senate in 2017 mandated two lease sales in the ANWR coastal plain, the first by 2021. The Trump administration finalized an oil and gas leasing program earlier this year that was promptly contested in court.

But while Trump has often said ANWR leasing represents one of his greatest achievements, Interior has yet to announce a sale or issue a call for nominations from interested oil and gas companies that may want to bid in the auction.

Biden has said one of his first priorities in office would be an attempt to reinstitute protections for the refuge.

The Trump administration delayed or canceled several oil and gas lease auctions this year due to crude oil prices depressed by the pandemic and a global supply glut. It has yet to announce its annual lease sale for the National Petroleum Reserve-Alaska, which like ANWR lies along the state’s Arctic coast.

But while an ANWR auction may be difficult to pull off before a transfer of power, the administration could still finalize some development goals for the coastal plain. The Bureau of Land Management could still finalize a permit for seismic surveying to better determine what oil and gas resources lie beneath the surface.

The controversial technique was punted two years ago when the industry failed to overcome impacts to a threatened subpopulation of polar bears and their cubs, as well as potential damage to the sensitive tundra.

Adam Kolton, executive director at the Alaska Wilderness League, said "huge question marks" remain on the rush behind the proposal, especially in the wake of Biden and Harris’ election.

"Environmental laws aren’t negotiable. These are laws that have to be complied with, and that isn’t something that BLM has remotely done thus far," Kolton said yesterday. "Will they continue to try and do this? Hopefully not. But if they do, we think that they’re really out of step with both the law and frankly with what the American people expect after a presidential election."

The Center for Western Priorities yesterday included the seismic survey proposal in a list of 10 rule and policy changes that the organization said have a "realistic possibility of being finalized" and yield significant risk to U.S. public lands.

In addition to the approval of seismic testing in ANWR, the conservation and advocacy group warned about the reopening of "loopholes to allow oil, gas, and coal companies to skirt royalties owed to taxpayers" and the easing of safety regulations for exploratory offshore drilling in the Alaskan Arctic.

"Over the remaining 72 days of the Trump administration, [Interior] Secretary [David] Bernhardt will no doubt be racing to finalize even more controversial policies that benefit his former and future clients in extractive industries," Jesse Prentice-Dunn, the center’s policy director, said in a statement.

Trump has long called for more pipeline infrastructure in the United States and, in the early days of his presidency, approved a key cross-border permit for the Keystone XL pipeline — a permit former President Obama once denied.

However, it remains unclear what Trump might do with the issue in his remaining time in office, although some industry leaders say they are expecting permitting to move ahead for key projects in the next month.

Michael Barnes, a spokesperson for Canadian pipeline giant Enbridge Inc., said the company is expecting a decision from the Minnesota Pollution Control Agency on a water quality certification this week for its Line 3 project, followed by a decision from the Army Corps of Engineers on a Line 3 permit for dredge-and-fill activities. The project involves replacing existing 34-inch pipe with new pipe in parts of North Dakota, Minnesota and Wisconsin.

When asked about Keystone XL, Terry Cunha, a spokesperson for TC Energy Corp., said construction on the pipeline is "well underway" in the United States and Canada and that the company expects the "ongoing permitting process to continue on its normal course."

"Over the past decade, the project has been studied numerous times at the federal and state level, with each showing it can be built in a safe and environmentally responsible manner," Cunha said in a statement, though Biden could attempt to block the pipeline.

And C.J. Osman, vice president at the Interstate Natural Gas Association of America, said the group will continue to back efforts by the Trump administration and Congress to reauthorize the pipeline safety program at the Pipeline and Hazardous Materials Safety Administration before the end of 2020.

Reauthorizing the program for four more years "remains a top priority for our members," Osman said in an email.