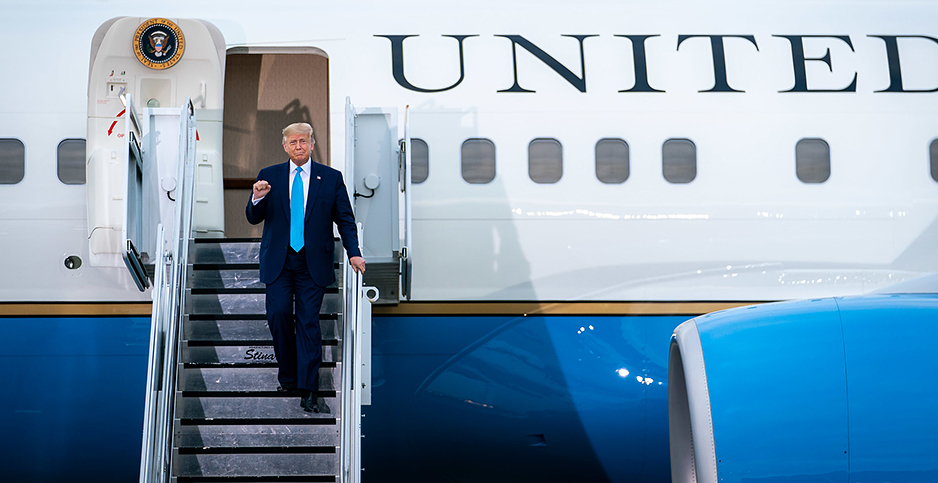 President Trump has spent the summer claiming that he saved millions of U.S. businesses by withdrawing from the Paris climate agreement.

It popped up in speeches from the White House Rose Garden to the campaign trail and, most recently, it surfaced in the president’s Labor Day address in which he said the climate deal had "basically taken away" American wealth.

"We had very high standards," Trump said Monday, apparently referring to the goals established under President Obama. "We would have had to close, under some scenarios, 25% of our businesses in order to qualify under this ridiculous Paris climate accord."

When asked where Trump got that number, the White House pointed to a 2017 report prepared by NERA Economic Consulting for the U.S. Chamber of Commerce and the American Council for Capital Formation.

But even some of the president’s allies acknowledge that he probably bungled his interpretation of the report.

The analysis assigned astronomical price tags to the Obama-era Paris commitments. Cutting U.S. carbon emissions between 26% and 28% compared with 2005 levels by 2025, as the Obama administration promised, would result in trillions of dollars in lost gross domestic product and more than a million industrial sector jobs by 2040, according to the report’s core scenario. It also predicted double-digit contractions in sectors ranging from paper to petroleum production.

The report was criticized in 2017 for many of its assumptions, including one claiming that Obama’s policies to reduce emissions from power plants, oil and gas production, and other sources would only achieve half of the promised cuts. The Rhodium Group and other analysts put the shortfall at closer to 20%.

To achieve half of Obama’s planned cuts to greenhouse gases, as outlined by NERA, the report assumed subsequent administrations would have to implement onerous new regulations and carbon penalties that far exceeded Obama-era mandates and that had yet to be proposed.

The report was also criticized for ignoring the economic benefits of climate policies.

Here’s something else the NERA report does not say: that 25% of U.S. businesses would close under the Paris Agreement, as Trump asserted.

The closest it comes is an estimate that transportation services might be reduced by 25% by 2040 because of the cost of fuel.

The Chamber and ACCF, which commissioned the study, don’t support Trump’s exit from the Paris Agreement. The Chamber voiced concerns about Obama’s goals of reducing emissions 26% to 28% by 2025, but it urged the United States to remain a party to the accord.

"However, it always needs to be kept in mind that the initial commitments made under Paris are just the start," Ebell noted.

Parties to Paris were asked to bring updated emissions pledges for 2030 to climate talks in Glasgow, Scotland, this year, which have since been canceled due to the novel coronavirus pandemic. Ebell noted that countries are supposed to increase the amount of carbon they reduce every five years under the Paris Agreement.

"The president’s statement is much less hyperbolic taken in this context," he said.

But even if the United States offered emissions reduction commitments that were stringent enough to demand an overhaul of the U.S. economy — something climate experts say the 2015 pledge falls far short of — the United Nations has no mechanism to enforce those commitments. And any country can unilaterally change them at any time.

So the Paris Agreement lacks the teeth to do the damage that Trump claims. And advocates say the United States’ absence from the deal could make it harder for American companies to access foreign markets as clean technology sectors like wind and solar are increasingly important employers.

"But more importantly, the costs of climate change are hitting us in the face daily," said Angela Anderson, climate and energy program director at the Union of Concerned Scientists.

The most recent National Climate Assessment shows that some U.S. industrial sectors could see economic losses of $100 billion or more by 2100.