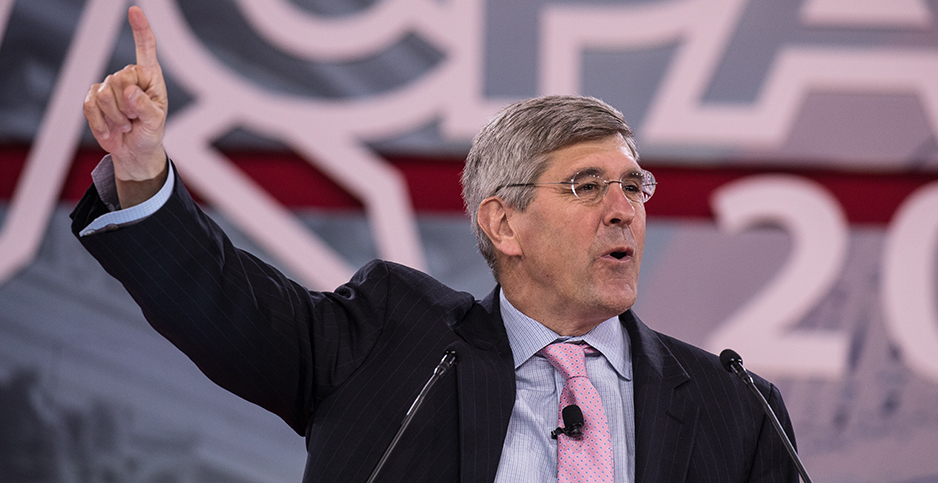 Stephen Moore, who was nominated by President Trump to the Federal Reserve Board, speaks at the 2018 Conservative Political Action Conference. Jeff Malet Photography/Newscom

One of President Trump’s picks for the Federal Reserve Board recently endorsed a carbon tax to address climate change.

Stephen Moore, a senior fellow at the Heritage Foundation, argued for years that a carbon tax would benefit the economy if it resulted in fewer environmental regulations and if it were offset by a lower income tax rate.

Moore has a history of rejecting climate science and has suggested that government scientists at NOAA, NASA and other science agencies are exaggerating the effects of warming. In January at a LibertyCon debate, he said that "the greatest threat against liberty today in the world is the climate change fanaticism."

But at the same conference, Moore said he would have no problem with a carbon tax because it’s "just a consumption tax of energy." He said he would make a deal with Democrats: Moore could accept a carbon tax if Democrats agreed to a flat tax on income, the kind where most Americans would pay the same rate.

"I think there is a deal to be made," Moore said. "I obviously am a skeptic on a lot of this climate change stuff, but look, if we could have a deal where we basically said a carbon tax for an 18% flat tax, yeah, let’s talk about that. But the left doesn’t want that. This is the point I’m making — the left wants everything. They want a carbon tax; they want 100 percent renewable energy; they want environmental regulations; they want to get rid of automobiles. My point is, why don’t we do a deal where there’s a carbon tax in exchange for something like a low flat-rate income tax that would vastly benefit the American economy?"

Trump announced on Twitter earlier this year that he would nominate Moore to the Fed, but he has yet to make it official. Trump also said he would nominate Herman Cain, a former Republican presidential candidate, to the prestigious economic posting. Since then, four Republican senators have said that they won’t support Cain, effectively ending the nomination before it began.

Moore recently told E&E News that he does not think the Fed should incorporate climate science into its work because it is not tasked with addressing "political" issues (Climatewire, April 9).

Moore’s openness to a carbon tax would put him in line with a number of conservative economists, including Kevin Hassett, chairman of the White House Council of Economic Advisers. Recently, Hassett told reporters that he has not backed off his long-standing support for a carbon tax to offset greenhouse gas emissions (Climatewire, March 20).

Like many of his fellow economists, Moore has been more receptive to carbon taxes in the past.

Though Moore rejects climate science, he has acknowledged the need to price carbon pollution and has stated that the price consumers pay for energy does not reflect the costs of carbon emissions to the environment. In a book he co-authored with Arthur Laffer in 2010, "Return to Prosperity: How America Can Regain Its Economic Superpower Status," the authors acknowledged that carbon dioxide has negative consequences.

"In the case of carbon emissions, there is a consumption problem," they wrote. "When consumers use energy, or products created from energy, the prices do not reflect the costs of the carbon emissions to the environment: consequently consumption is higher than optimal once the full costs of the product are taken into account. The appropriate policy response is a tax on carbon emission themselves, which for practical purposes boils down to a tax on the consumption of oil, other fossil fuels, or products where carbon gases are emitted as a by-product, the source of the market distortion, but not on trade or production, the source of adverse economic impacts."

More recently, however, Moore has soured on carbon taxes.

In the months leading up to his likely nomination, Moore wrote dozens of tweets critical of carbon tax proposals. In particular, Moore has targeted conservative ideas on climate change.

In his Twitter missives, Moore often tags Grover Norquist, the conservative anti-tax crusader. Moore saves the brunt of his criticism for the Climate Leadership Council and RepublicEn for promoting a carbon tax plan that includes a dividend to consumers, who would feel the costs of higher energy prices.

Moore called it a tax scam and said it would become "one of the largest income-redistribution schemes in modern history." He also accused the conservative groups of working with young people who held a climate strike and school walkout last month to draw attention to climate inaction.

"The reality is that even a #carbontax perfectly administered is a poor substitute for the strong tax and regulatory reform that is currently possible," Moore tweeted. "The plan proposed by @TheCLCouncil [Climate Leadership Council] would not cut a single tax rate, meanwhile giving the left a massive new tax regime."

Moore’s previous enthusiasm for a carbon tax shows that he recognizes it can be implemented without economic harm, said Alex Bozmoski, managing director at RepublicEn.

"I was really encouraged to see that although Stephen Moore is not motivated by climate risk to price carbon, when it comes to economics, he does understand the economic and innovation benefits of swapping a tax on pollution with a tax on productivity, investment and labor," Bozmoski said.

The plan by the Climate Leadership Council has bipartisan support, said Carlton Carroll, the group’s spokesman. That includes all former Fed chairs, both Republicans and Democrats, and 15 former chairs of the White House Council of Economic Advisers. About 3,500 economists have endorsed it, Carroll said.

"Economists and businesses have largely agreed that carbon fees are the way to reduce emissions, and what our plan does is it combines a carbon fee with a carbon dividend to send the proceeds back to the American people, and that is a game-changer as far as climate policy," he said. "In order to make the climate fee politically popular, all the money needs to be returned to the people."