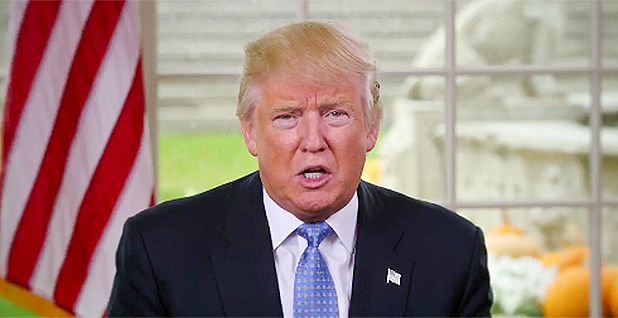 A proposed rule from the Trump administration takes aim at rising sustainable investment trends, but some say it may harm the fossil fuel interests it aims to protect. @realDonaldTrump/Twitter

The Trump administration is taking aim at climate-friendly investments with a plan to block retirement fund managers from decisions the Labor Department says would put social goals before profits.

But critics say Labor’s proposed rule last week could instead backfire on funds that include fossil fuel companies – whose performance is trending worse than those focused on environmental, social and governance (ESG) criteria.

"Why is DOL picking on Big Oil like this?" quipped Andrew Behar, CEO of the shareholder advocacy group As You Sow. "The people who wrote this are confused."

At issue is Labor’s interpretation of the Employee Retirement Income Security Act of 1974, which requires financial managers in control of private pension funds, 401(k) plans and other retirement accounts to act in the best financial interests of plan participants. The department is placing more scrutiny on sustainable investments by arguing that ESG concerns can get in the way of sound investment strategies.

"Providing a secure retirement for American workers is the paramount, and eminently-worthy, ‘social’ goal of [Employee Retirement Income Security Act] plans; plan assets may not be enlisted in pursuit of other social or environmental objectives," the Labor Department said in its proposed rule.

"Given the increase in ESG investing, the Department is concerned that, without rulemaking, ESG investing will present a growing threat to [Employee Retirement Income Security Act] fiduciary standards and, ultimately, to investment returns for plan participants and beneficiaries," the regulation adds.

Behar, however, said the rule could function as an inadvertent attack on oil. Currently, the fund that tracks the S&P 500 index but excludes fossil fuel companies is outperforming the fund that tracks the whole S&P 500. If advisers are compelled to focus solely on financial returns, they must turn to sustainable investment vehicles, Behar reasoned.

Other critics of the rule warn it will harm ESG-leaning companies by forcing investment managers to jump through more hoops to justify including them in retirement portfolios.

"What it means is that if you are a company that is going out of its way to be environmentally conscious and be socially responsible, and have great corporate governance, it’s not going to do you any good," said Raymond Malone, a partner at the law firm BakerHostetler, "because there is now this sort of express impediment that says that is not really enough."

Yet the proposal comes as analysts expect ESG demand to continue to rise alongside millennials’ interest in the environmental impact of their investments — a trend that could grow more pronounced with the coronavirus pandemic and nationwide protests against systemic racism and police brutality (Energywire, June 15).

"There is sort of a twist of irony here," Malone said. "If anything, the pendulum is swinging to ESG as an investment theory."

Even so, Trump administration officials have not minced words with their doubts about the ESG movement. Last week, Labor Secretary Eugene Scalia said that "private employer-sponsored retirement plans are not vehicles for furthering social goals or policy objectives," echoing 2-year-old DOL guidelines that warned plan managers against "too readily" assuming economic value in ESG.

Under the rule, investors would have to document the decision to include ESG funds and track the performance, imposing a higher hurdle they might not want to try to clear out of fear of getting penalized by regulators, explained David Hackett, a partner at Baker & McKenzie LLP.

The rules surrounding ESG investing have confounded federal regulators for years, with the George W. Bush administration issuing "confusing" guidance in 2008 and President Obama later allowing ESG considerations, said Bryan McGannon, director of policy and programs at the Washington-based Forum for Sustainable and Responsible Investment, known as US SIF.

"This has been a political football back and forth," McGannon said. "This [Trump proposal] is a throwback of ‘Let’s hold onto what we have and not move forward to the way the rest of the finance world is heading.’"

The Trump administration’s stance is a bearish counterpoint to varied groups incorporating ESG ratings into their portfolio choices and praising the trend’s value at assessing risks and rewarding climate-centered goals.

BlackRock Inc., the world’s largest asset manager, with around $7 trillion in assets, committed to viewing investment decisions through an ESG lens in January. And last week, CEO Larry Fink said 90% of sustainable indexes had outpaced traditional ones in the first three months of the year, according to the Environmental Defense Fund. The World Economic Forum, meanwhile, has said social and environmental concerns represent a new era of capitalism.

Environmental groups like the Sierra Club have latched onto the financial power of ESG in their advocacy for a transition away from fossil fuels, using the money argument to pressure banks and mutual funds in the court of public opinion.

"ESG funds not only thrive in bull markets; they help investors weather precipitous financial downturns," EDF’s Tom Murray and Ben Ratner wrote in a Forbes op-ed that criticizes the rule.

"As we confront the effects of climate change and COVID-19, we need policies that recognize the present and future impact of ESG factors on financial performance," they wrote.

ESG advocates’ reactions to the proposal ranged from critical to dismissive. Amit Narang, regulations advocate at Public Citizen, noted that the rule is classified as economically "significant," meaning its costs would exceed $100 million annually. But the proposal’s justification of costs is brief and unclear, he said: "There are no numbers."

The Labor Department did not respond to questions about the plan.

Other experts doubted that the proposal would be finalized without major changes. But some worried that it could have a serious impact on investments in renewable energy sectors as well as Big Oil.

Aaron Padilla, the American Petroleum Institute’s manager of climate and ESG policy, said the oil industry has a "long track record of reporting on sustainability and ESG." He said in an email that the oil lobby would review the proposal with an eye toward ensuring that "the federal government encourages the consideration of ESG as it is linked to companies’ financial performance."

The industry faces economic headwinds both in the near term, with the pandemic and a global glut of oil depressing the price of crude, and in the long term, as technology and government policy decisions may become more effective at transitioning the world away from fossil fuels.

ESG advocates contend that the Trump administration is trying to distort the markets back in oil’s favor. Renewable energy industry representatives have warned that booming green sectors would be punished under the proposed rule even as they outperform Big Oil.

"It seems a very strange time to be trying to put the thumb on the scale," said Gregory Wetstone, president of the American Council on Renewable Energy.

US SIF estimates that ESG features in $12 trillion worth of investments today — a rise of nearly 40% compared with 2016.

"These are not small matters we are talking about," Wetstone said, adding that it is fiduciary responsibility, not politics, driving the green trend.