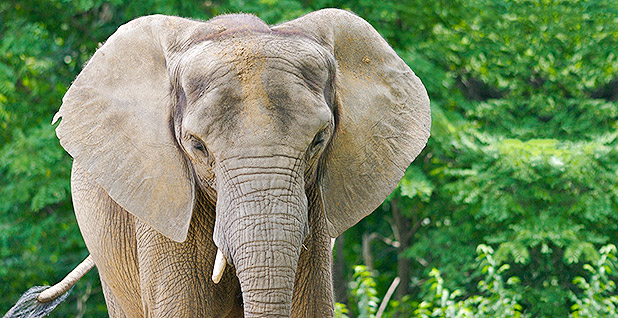 President Trump has once again blasted elephant trophy imports, garnering praise from some wildlife conservation advocates but complicating the work of his own administration.

In a television interview with Piers Morgan aired on Britain’s ITV last night, Trump sharply criticized the unnamed Fish and Wildlife Service official who decided to resume the trophy imports from Zimbabwe and Zambia. That decision now remains under review after Trump blocked it.

"I thought it was terrible," Trump said. "That was done by a very high-level government person. As soon as I heard about it, I turned it around."

Though Trump did not identify the official he was throwing under the safari bus, his words could still pain those struggling to craft new policies. The president put his thumb on the scale of an administrative decision that’s already loaded down with litigation, and the likelihood of more to come.

With his half-completed suggestion that he was "not believing in the conservation" argument for elephant hunting, and his broad-brush denunciation of the practice, Trump seemed to foreclose any alternative but a continued trophy import ban.

"I didn’t want elephants killed and stuffed and have the tusks brought back into this [country]," Trump said. "People can talk all they want about preservation and all of the things that they’re saying where money goes toward. Well, money was going, in that case, to a government which was probably taking the money, OK?"

The Interior Department, where officials are continuing to work on the elephant trophy import policy with no specific deadline, did not offer a public reaction today to the president’s words.

The issue, and the controversy, predates the Trump presidency.

The Obama administration’s FWS banned elephant importation from Zimbabwe in 2014. Zambia’s elephants are listed as threatened.

The agency said in 2014 it could not make the finding that the sport-killing of the Zimbabwe elephants "would enhance survival of the species," as the law requires. Officials stated, in part, that the population of Zimbabwe elephants fell to 47,366 in 2013, down from 84,416 in 2007.

Safari Club International and the National Rifle Association filed suit to challenge the Zimbabwe ban. The groups contended FWS failed to support its ban with necessary findings and also challenged the agency’s data on population and poaching.

Time passed, and the administration changed.

Citing a detailed 39-page assessment, FWS declared in November it could "make a determination that the killing of trophy animals in Zimbabwe, on or after January 21, 2016, and on or before December 31, 2018, will enhance the survival of the African elephant."

With the so-called enhancement finding, and a similar 23-page one for Zambia, Fish and Wildlife announced it would resume issuing trophy import permits for the two African countries (Greenwire, Nov. 15, 2017).

Facing a public outcry, Trump buckled and said on Twitter that he would put the decision "on hold" so he could "review all conservation facts." He then retweeted commentators who praised him.

"Big-game trophy decision will be announced next week but will be very hard pressed to change my mind that this horror show in any way helps conservation of Elephants or any other animal," Trump wrote Nov. 19 (Greenwire, Nov. 20, 2017).

Eight weeks have since gone by, without public sign of progress one way or another.

"Trump is correct that trophy hunting is not benefiting elephants and we hope he follows through on reinstating the trophy import ban, but a tweet is not a policy," Tanya Sanerib, the Center for Biological Diversity’s International Program legal director, said in a new statement.

Several lawsuits, one filed by Friends of Animals and the Zimbabwe Conservation Task Force and another by the Natural Resources Defense Council and the Center for Biological Diversity, have challenged the Fish and Wildlife Service’s initial decision to lift the bans (Greenwire, Nov. 28, 2017).

Federal law states that "African elephant sport-hunted trophies may be imported into the United States" provided that certain conditions have been met: in particular, that "a determination is made that the killing of the trophy animal will enhance the survival of the species."

One of the additional legal complications arising from Trump’s latest rhetorical intrusion could be an argument that the Fish and Wildlife Service has now been handed its conclusion for which it must shape its reasoning, rather than vice versa.

Trump’s all-encompassing statement that he "didn’t want elephants killed and stuffed" could also make it harder for officials who might try to distinguish between Zimbabwe, which has been shaken by political instability, and Zambia, which has a more solid democratic reputation.