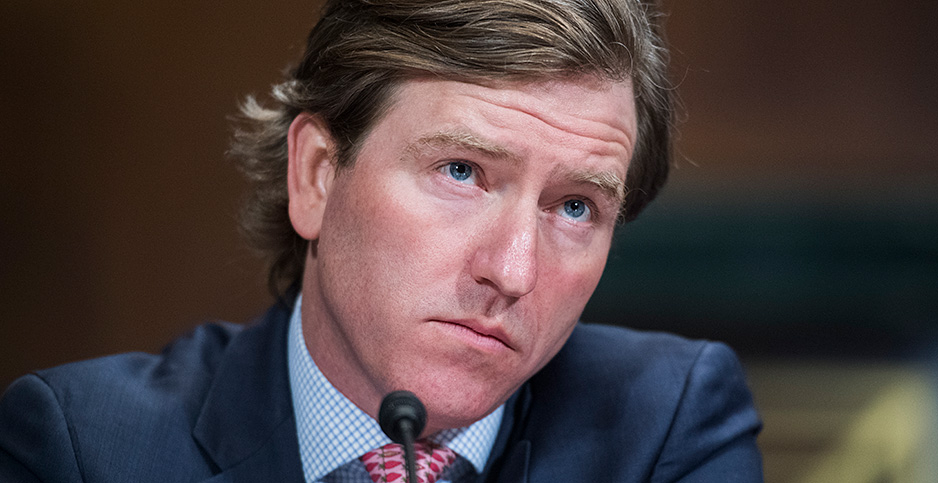 Trump said in a Twitter post that Krebs’ statement last Thursday affirming the security of the 2020 election "was highly inaccurate."

"Therefore, effective immediately, Chris Krebs has been terminated as Director of the Cybersecurity and Infrastructure Security Agency," Trump said in messages that Twitter tagged with a warning for including unsubstantiated claims of election fraud.

Krebs, who had led CISA since the DHS cyber agency was founded two years ago and had bipartisan support throughout his tenure, tweeted from his personal account soon after Trump’s announcement.

Translation: The recent statement by Chris Krebs was highly accurate, in that there were no improprieties or fraud, confirmed by all credible 2020 Election officials sworn under oath to be truthful. Therefore, he has been terminated for refusing to lie for me, your #LiarInChief. pic.twitter.com/OmJGS15agK

Krebs has been a fixture at cybersecurity conferences and has been widely credited for improving relations between the private and public sectors on issues from grid hacking defenses to the cybersecurity of voting machines. While CISA is best known for its efforts to secure the 2018 and 2020 elections, the agency also acts as the nation’s "risk adviser" for 15 critical infrastructure sectors, including the energy, nuclear and chemical industries.

Reuters first reported last week that Krebs expected to be fired as CISA ramped up efforts to combat disinformation around the legitimacy of the election (Energywire, Nov 13). CISA has kept a website dedicated to disproving false claims of election fraud — many of which continue to be spread by Trump — and reports surfaced that the site had drawn the president’s ire.

Democratic and Republican lawmakers, cybersecurity experts, and current and former DHS officials quickly came to the defense of the former Microsoft Corp. executive, who is highly regarded on both sides of the aisle.

The bipartisan commission, which presented Trump with nearly 80 cybersecurity policy recommendations earlier this year, "consistently saw that CISA was among our nation’s most important cyber assets. This success doesn’t happen without Chris Krebs," said King.

"By firing Mr. Krebs for simply doing his job, President Trump is inflicting severe damage on all Americans — who rely on CISA’s defenses, even if they don’t know it," he added.

"The death throes of the Trump Administration increasingly put our national security in jeopardy," said Langevin. "Chris Krebs is a public servant of impeccable integrity. His work at CISA has drawn praise from across the political spectrum, and his team has done an exemplary job improving our election security over the past four years."

Sen. Ben Sasse (R-Neb.), a member of the Intelligence committee, praised Krebs for his work on the Cyberspace Solarium Commission and criticized Trump’s decision.

"Chris Krebs did a really good job — as state election officials all across the nation will tell you — and he obviously should not be fired," Sasse said in a statement.

Sen. Richard Burr (R-N.C.) said that Krebs was a "dedicated public servant who has done a remarkable job during a challenging time."

Former DHS Undersecretary Suzanne Spaulding, who in the Obama administration led the DHS office that would become CISA, said on Twitter that Krebs "is the only person I can think of who is leaving this administration with his reputation not just intact but, appropriately, burnished."

One of Krebs’ last acts as CISA director was to release a statement — backed by a coalition of federal and state election officials — declaring that this month’s election "was the most secure in American history."

Rep. Adam Schiff (D-Calif.), chairman of the House Intelligence Committee, said Krebs "worked diligently" to support election officials "and inform the American people about what was true and what was not."

"Instead of rewarding this great service, President Trump is retaliating against Director Krebs and other officials who did their duty. It’s pathetic, but sadly predictable that upholding and protecting our democratic processes would be cause for firing," Schiff continued.

Krebs joins several Trump administration cybersecurity and national security officials who have stepped down or been pushed out of their posts in recent weeks. CISA Assistant Director Bryan Ware left the agency just last week.

The move, however, still appeared to catch CISA by surprise, as just hours before his termination, an agency spokesperson sent a list of events where Krebs was scheduled to speak today. DHS did not respond to a request for comment, and it was not immediately clear who would replace Krebs at the helm of CISA — The Wall Street Journal reported that CISA’s No. 2 official, Matthew Travis, also resigned yesterday. CISA Executive Director Brandon Wales is the third-ranking official at the agency.

"[Krebs] did his job. He did it without fear or favor. To use all caps like our outgoing President likes to do: OUTRAGE," tweeted former presidential candidate Sen. Amy Klobuchar (D-Minn.).

**Sign up to receive digestible and insightful energy cybersecurity news and analysis from E&E News. Once a week in your inbox.**