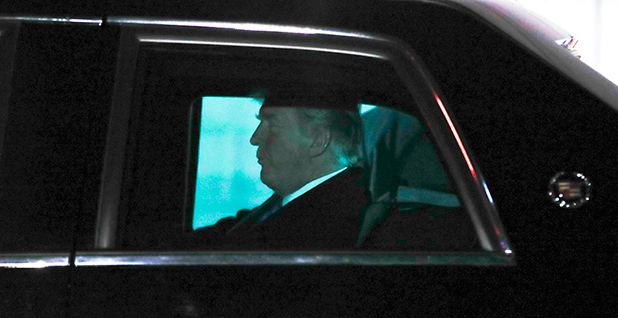 President Trump sat in his limousine as he left the White House en route to the Capitol last night to deliver the State of the Union address. Alex Brandon/Associated Press

President Trump laid out his plans for infrastructure in broad strokes last night, but the details remain elusive.

"I am asking both parties to come together to give us the safe, fast, reliable and modern infrastructure our economy needs and our people deserve," Trump said in his first State of the Union address. "Tonight, I am calling on the Congress to produce a bill that generates at least $1.5 trillion for the new infrastructure investment we need."

The remarks were not dissimilar to what the president said about infrastructure nearly a year ago during a speech to a joint session of Congress at the outset of his presidency.

But $1.5 trillion is $500 billion more than what he proposed in that earlier address, and a significant bump in what the White House had initially suggested in preliminary talks with Congress.

Despite the relative lack of details in the speech, lawmakers are watching as tangible infrastructure proposals gradually emerge from the White House.

"The secretary of Transportation’s going to be there — [Elaine] Chao — we’re going to have [National Economic Council Director] Gary Cohn, so we’re going to spend an hour on that on Thursday," Barrasso said.

The White House during the speech circulated an outline of where the money for infrastructure would go. The outline generally conforms with a draft plan that was leaked to Axios last week, which would put half of the federal money toward incentivizing investment at the state and local level.

"It’s still early," the EPW Committee ranking member said last night. "We should have the ability to put together a broad bipartisan plan. And I’m not sure that this administration knows how to do it, but hopefully we can figure it out."

Others, though, don’t share that outlook. Sen. Maria Cantwell (D-Wash.), the ranking member on the Energy and Natural Resources Committee, said she could only recall a single meeting with the administration on infrastructure.

"I don’t know what they’re thinking," she said.

Sen. Steve Daines (R-Mont.), who chairs the Energy and Natural Resources Subcommittee on National Parks and is close to Zinke, told E&E News last night not to read anything into the omission.

"There’s a long to-do list for our nation, and he’s talked about infrastructure," Daines said of Trump. "While he didn’t specifically call out national parks tonight, I can tell you for certain, because we’re working with the White House and Secretary Zinke, it’s one of his highest priorities — the $11 billion backlog that needs to be part of an overall infrastructure bill."

Daines confirmed that an "Interior Maintenance Fund" financed by mineral and energy development on public lands that was referenced in a recent leaked administration document is one idea under discussion.

"And I think what he’s proposed is something that we need to take a look at," he said.

Though it won praise from Republicans, Trump’s speech last night highlighted a number of tricky issues that Congress will have to work out on infrastructure in the coming months.

The White House is expected to finally release a detailed legislative proposal within a few weeks. In the early stages, the administration has proposed spending $200 billion to leverage up to $1.7 trillion after contributions from state and local governments and the private sector.

"Every federal dollar should be leveraged by partnering with state and local governments and, where appropriate, tapping into private-sector investment," Trump said.

Members on both sides of the aisle have indicated that they think Trump’s ratio of federal to outside spending — which flips the 80/20 split that has traditionally funded infrastructure — may be optimistic.

Carper said Democrats are looking for the federal spending to be a bigger slice of the pie.

Sen. Mike Rounds (R-S.D.), who also sits on EPW, said a bigger federal investment is likely on the table.

"I think they may be a little optimistic in terms of getting that type of a return on $200 billion," he said. "I think they may have to be looking at more infusion of federal dollars going in."

Still, there are questions as to how Congress plans to pay for infrastructure, even if the final number stays at $200 billion.

Rep. John Shimkus (R-Ill.), who chairs the House Energy and Commerce Subcommittee on Environment, said the key to unlocking the "pent-up energy" in both parties on infrastructure remains finding a funding source.

"The things that we’ve done is try to set the table on things like brownfields, safe drinking water, things that can be brought to the table as part of a big package," he said, referencing bills his panel has moved that he wants to see included in the infrastructure package.

"But I always think that the holy grail is replenishing the Highway Trust Fund, because that’s what moves everybody," he said, "you do roads and bridges, locks and dams, broadband."

‘A nation of builders’

Trump also pointed last night to what he wants to do to streamline environmental permitting, but that, too, could be a heavy lift.

"Any bill must also streamline the permitting and approval process — getting it down to no more than two years, and perhaps even one," the president said.

In a "discussion draft" leaked to The Washington Post late last week, the administration proposed slapping a two-year time limit on environmental permitting and requiring the White House Council on Environmental Quality to rewrite its guidance for the National Environmental Policy Act (Greenwire, Jan. 29).

"America is a nation of builders," Trump said last night. "We built the Empire State Building in just one year — is it not a disgrace that it can now take 10 years just to get a permit approved for a simple road?"

There are indeed instances of long permitting wait times for infrastructure projects, as congressional Republicans are quick to point out.

At Seattle-Tacoma International Airport, for instance, it took nearly 20 years to navigate environmental permits and lawsuits over potential wetlands damage for a new runway that eventually opened in 2008. Sen. Dan Sullivan (R-Alaska) and other lawmakers have highlighted the airport as they make the case for permitting reform.

But critics say those kinds of broad conclusions about permitting are misleading.

Environmentalists in particular think the administration is misrepresenting the burden of environmental laws like NEPA and how the permitting process works.

"Trump’s proposal fails to acknowledge the lengths to which federal agencies have already gone to reform these laws and reform permitting times," Christy Goldfuss, senior vice president for energy and environment policy at the Center for American Progress, said in a call with reporters yesterday before the speech.

"It is impossible from where we are sitting now to see how any of the provisions in the current proposal would be acceptable, even if they just take a few pieces of these," she added.

Some Democrats, meanwhile, have also started to balk at Trump’s permitting reform proposals. House Energy and Commerce Committee ranking member Frank Pallone (D-N.J.) said a bigger federal investment — rather than environmental permits — should be the target of the plan.

"President Trump mistakenly wants people to believe that environmental protections are preventing infrastructure projects from moving forward when in reality the obstacle is a serious lack of funding," Pallone said in a statement yesterday.

But Rounds said those Democratic objections are nothing lawmakers won’t be able to work through.