Trump has a messaging problem on climate 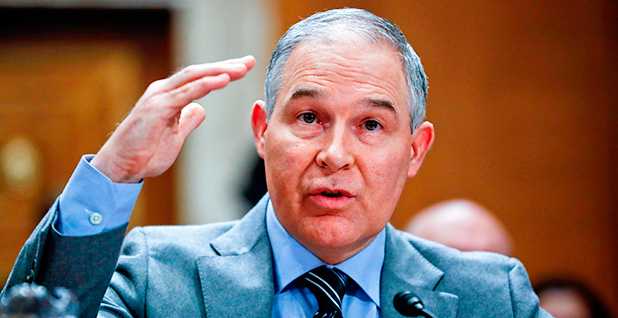 It was noteworthy because of his job title and how infrequently it occurs, but here was Scott Pruitt, head of the Environmental Protection Agency, talking about climate change.

That might have been a welcome development for environmentalists if not for one significant detail: Pruitt was declaring that energy derived by burning biomass, such as trees, won’t increase greenhouse gas emissions in the atmosphere. He decided that a decade of debate was over by calling biomass carbon-neutral.

The scientific community, though, has not agreed on that point.

To critics, the Trump administration’s inconsistent embrace of climate messaging is problematic. The White House only acknowledges that the globe is warming when doing so helps promote its favored energy policies, these critics say. Industry allies usually benefit.

Biomass was the latest example, they said.

"I think the bottom line is that Scott Pruitt and the Trump administration have repeatedly rejected any scientifically established link between carbon pollution and climate change," said Sami Yassa, a senior scientist with the Natural Resources Defense Council. "It’s ironic that Pruitt decides to recognize concerns over carbon emissions only when he thinks it could help the industry. And sadly, he gets the science wrong."

Pruitt has offered misinformed comments on climate science in the past, including downplaying the role that carbon dioxide plays in warming the Earth (Greenwire, March 9, 2017). He also supports a public debate on climate science. Emails released to NRDC under the Freedom of Information Act showed how agency officials were coordinating that debate, an exercise Trump reportedly supports (Climatewire, May 11).

Even as Pruitt questions the underlying science on global warming, he has touted greenhouse gas reductions recorded by EPA. (The agency documented an 11 percent drop in CO2 since 2005.) So in the span of months, he suggested that carbon dioxide is not the driver of rising temperatures while also applauding its curtailment.

Pruitt used the CO2 reductions as a way to rebuke policies like the Obama administration’s Clean Power Plan. But that rule never went into effect. Experts, including those with the U.S. Energy Information Administration, contend that the emissions decrease largely reflects cheaper natural gas displacing coal in the power supply. The Trump administration, meanwhile, wants to increase the use of coal.

"He’s doing his thing," said Dina Kruger, the former director of EPA’s climate change division. "He’s going to suck EPA dry, and when he’s done with that, he’s going to go back to Oklahoma."

The administration’s somewhat confused promotion of climate progress stretches beyond its environmental agency. Some former Trump aides say that exposes a messaging problem in the White House.

Part of that stems from the vacancy in the top spot at the White House Office of Science and Technology Policy, said George David Banks, Trump’s former international energy and climate aide.

Here are recent moves by the Trump administration that illustrate those shortcomings:

The biomass decision has riled the forestry and climate communities.

Timber interests that long wished for neutral credentials for biomass — giving their products greater marketability in the process — got a big lift from Congress, which passed a spending bill that says EPA "shall" develop a policy to "reflect" carbon neutrality of forest bioenergy.

"It’s quite unequivocal," he said in an email.

The policy’s supporters said it provides certainty that properly values forest resources and encourages best management practices. It’s a better alternative to addressing deforestation emissions than regulating land use, which would be politically difficult, said Brent Sohngen, a professor and forest economist at Ohio State University.

Yassa of NRDC disagreed. He noted that EPA cannot predict whether timber interests or foresters will replant trees. The climate factor for biomass is also about time scales, as burning trees emit carbon instantly, and it takes decades for growing trees to recapture all that carbon dioxide.

Therefore, Yassa said that if EPA policy were to "reflect" anything, as Congress required, it should account for what the agency’s science advisers have said: "It is not scientifically valid to assume that all biogenic feedstocks are carbon-neutral."

"It is well-established even within the EPA’s own Science Advisory Board — biomass is not categorically carbon-neutral, and that it depends on the feedstocks, the end use and so many other factors," Yassa said.

Say what? Environmentalists were aghast. But the White House sees natural gas and efficient coal plants as a way to advance U.S. economic interests while reducing emissions.

It’s a message the Trump administration continues to sharpen. Documents obtained by E&E News yesterday show that the administration is discussing a "new, central institution" to convene scientists, policymakers and industry to plot a path for coal and natural gas technology and exports. The administration said it’s trying to be realistic about projections that countries will continue using fossil fuels for years (Greenwire, May 15).

"Right now, we don’t have any platforms for existing international institutions where we can have an honest discussion about the important role that fossil fuels will play in the global energy economy," said Banks, who led initial efforts on the alliance when he was at the White House. "The [International Energy Agency] was founded to help improve cooperation on energy security, and unfortunately, it’s become another forum to discuss climate mitigation with politically correct energy technology and tools."

Even the IEA suggests that countries, especially those with swelling middle classes in emerging economies, will use more and more fossil fuels. Banks and the administration’s supporters contend that’s a reality people can’t wish out of existence, so it makes sense to figure out ways to use those fuels in the cleanest way possible.

But scientists and climate activists say prolonged use of coal and natural gas — especially without emissions control technologies, such as carbon capture and sequestration — is anathema to combating rising emissions in a meaningful way.

Scientists say that even if nations achieve cuts pledged through the Paris climate accord, global emissions will far surpass the ceiling to avoid locking in a 2-degree-Celsius global temperature increase by 2100. Long-term use of coal and natural gas is incompatible with the goals of the Paris deal, from which Trump has said he will withdraw.

While the White House has touted more efficient fossil fuel deployment as part of the global answer to climate change, it’s also made the world’s job in assessing greenhouse gas mitigation more difficult.

The Trump administration quietly canceled NASA’s Carbon Monitoring System, as first reported last week by Science. It was a key program that measured carbon sinks and sources, and scientists worry it could complicate tracking global progress under the Paris accord.

"You really can’t mitigate what you don’t measure," Gurney said. "The information was also helping us efficiently target what to mitigate."

The disconnect between the Trump administration’s strategy on fossil fuels as a climate solution and the move to cut the program for his work was apparent to Gurney. Beyond the Vulcan project, the Carbon Monitoring System supported scientists around the globe.

"Comical," he said. "It’s not just U.S. researchers — and this is true of many programs across the federal agencies in science — this affects the whole world. We’re a beacon."

Energy Secretary Rick Perry has positioned the Energy Department as a participant in the mission to solve climate change through its reputation as an innovation hub, hewing to the GOP’s interest in technology development as a climate solution.

In that vein, Perry surprised many in the electricity industry when he floated a new technology idea — small, modular coal-fired power plants. He conceived it as a way to boost electric grid resilience, and DOE put out a request for information for proposals that said the effort "promotes the advancement of coal-fired power plants that provide stable power generation with operational flexibility, high efficiency, and low emissions."

The concept induced head-scratching from experts. While it’s technically feasible, the economics for smaller coal plants simply don’t work, said Michael Webber, a mechanical engineering professor and co-director of the Clean Energy Incubator at the University of Texas, Austin. He called it "a goofy idea."

On top of that, the efficiency metric DOE sought — 40 percent — isn’t that impressive, paling in comparison with new units being built in China, said Jennifer Wilcox, an associate professor of chemical and biological engineering at the Colorado School of Mines.

In terms of keeping coal viable in a climate-constrained world, Wilcox said, the Trump administration would be better off marshaling finances toward carbon capture and sequestration technologies. Any money funneled to what she called a "discouraging" effort is funding taken away from what she considers more reasonable endeavors, like CCS, she said.

"I absolutely disagree with the concept of putting money to advancing coal with an efficiency of 40 percent," she said.