Trump has no science adviser. Will that politicize climate? 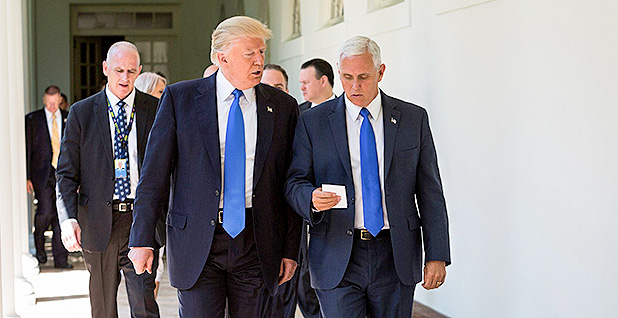 Federal scientists might feel as if their parents are out of town. In the Trump White House, there isn’t a presidential science adviser to oversee a major report on climate change.

For the National Climate Assessment, a congressionally mandated study, the fact that President Trump hasn’t nominated a National Oceanic and Atmospheric Administration chief means that career staff members have been developing a draft study that affirms mainstream climate science. NOAA also released a separate report yesterday saying that 2016 was the hottest year ever recorded worldwide, the third straight year of record-breaking temperatures.

The studies contradict Trump administration officials who have downplayed the effect humans have on the climate. They also contradict the president, who has called climate change a hoax. But if getting those reports into the public sphere is good news for scientists, at a time when some administration officials misstate the findings of climate research, it’s of little solace.

That’s partly because the Aug. 18 decision by the White House Office of Science and Technology Policy (OSTP) to either approve or reject a study that’s part of the National Climate Assessment has illuminated a vacancy in the Trump administration. More than six months into his presidency, Trump still lacks a science adviser.

"Scientists are worried about it," said Neal Lane, one of President Clinton’s science advisers, who is now a senior science and technology policy fellow at Rice University’s Baker Institute for Public Policy. "I’m alarmed by things like this. They’re important reports, and they’re strategically important reports that help the government set policy. But we also have crises, and this office is deeply involved in the response."

While their roles and influence shift with every president, there are some basic functions consistent across all science advisers, former OSTP officials told E&E News. Science advisers coordinate and settle disagreements between agency heads on reports like the National Climate Assessment. They also advocate for and set science and research budget priorities, bring scientific assessments to regulatory decisions, take leading roles in crisis situations like viral outbreaks and oil spills, and tap the minds of scientists in far-ranging disciplines to present the best available information to the president.

The void at OSTP means that federal agencies, overseen by political appointees, and the White House could make regulatory and policy calls without broad, coordinated scientific input. Most of those in the understaffed OSTP, the office charged with coordinating and settling disputes between federal agencies on the climate report, are career officials waiting for direction from the administration.

"I was the highest level to which [the National Climate Assessment] went. Nobody in the West Wing even looked at it," John Holdren, President Obama’s science adviser, said in an interview. "Ordinarily, [a report] going to the White House would have meant going to the OSTP director. But there is no OSTP director. So who is looking at it? I have no idea."

To many in the scientific community, the open position at OSTP speaks to the Trump administration’s apparent disregard for science and expert opinion. Many on the far right who constitute Trump’s base see scientists and experts as an elite class that has cast them aside. The distrust of climate scientists in particular is pronounced: Just 15 percent of conservative Republicans say climate scientists "can be trusted a lot to give full and accurate info on causes of climate change," according to an October 2016 Pew Research Center poll.

Of course, selecting a science adviser who bucks the consensus on climate change that humans are driving temperatures higher wouldn’t instill much trust from the science community. That the few candidates publicly mentioned — such as Princeton University physicist William Happer and Yale University computer scientist David Gelernter — have been critical of climate science has given some scientists pause.

The science adviser is supposed to be seen as a convener and someone who’s respectful of science writ large. Those standards are difficult to attain while maintaining contrarian viewpoints, said Andrew Rosenberg, director of the Union of Concerned Scientists’ Center for Science and Democracy.

"Having a good scientist in their field who is an iconoclast isn’t very helpful in a coordinating role," Rosenberg said. "And you’re not only bringing forward your view to the president."

Concerns about the Trump administration’s science views came to a head this week when federal researchers sought to give The New York Times a draft of a climate science study that’s part of the National Climate Assessment. The scientists told the Times they feared the Trump administration would silence that study, which was sitting at OSTP after the 13 federal agencies working on it had reviewed and commented on the findings. (An earlier version of the report was publicly available at the time of reporting, unbeknownst to the Times.)

"I can assure you that the NCA process is running smoothly and according to schedule. No deadlines have been missed, which I believe is actually a first for this thing," OSTP spokesman Ross Gillfillan said in an email.

Asked about the concerns of potential censorship portrayed by some scientists, he said, "The alarmism is overblown and unwarranted."

Added Donald Wuebbles, a former Obama OSTP official charged with leading the National Climate Assessment who is now working on it as a consultant with the U.S. Global Change Research Program: "We’ve seen no sign of [suppression], so we’ve not been talking about it."

The lights aren’t completely out at OSTP, but the administration has thinned its ranks. Many officials working on climate and energy issues are no longer there, while other political and advisory staff have come aboard in recent weeks (Greenwire, Aug. 4).

Chatter about naming a science adviser has been quiet for months. Many of the people filling seats at OSTP were on loan from federal agencies and have since returned, either because their details ended or the work waned. It’s not clear what staff there will bring to bear on the National Climate Assessment process, though in the past, the office has had to step in on matters such as whether to call a climate effect "very strong" or "severe" and how to characterize climate impacts that could signal for substantive policy responses.

"It probably makes the science less connected to the White House if there is no science adviser meeting with the White House," said Wuebbles, who is now an atmospheric scientist at the University of Illinois.

Former federal science officials saw the Trump budget proposal as a reflection of the science adviser’s absence. The White House proposed gutting basic and applied research programs across the board.

The science adviser is generally viewed as the community’s top advocate within the White House and often a champion of increasing research spending. The adviser works closely with the Office of Management and Budget to synthesize research and development priorities and defend them from congressional criticism. In George W. Bush’s presidency, where the science adviser had a relatively weak influence on policy, annual research and development funding requests surpassed those of Obama, though with emphasis on different sectors, according to the American Association for the Advancement of Science.

"It’s only rarely that science issues, or issues with technical content, actually come up to the White House for decisions or for policy direction change, but probably the most common way they come up is in the budget process, and that’s where a lot of the discussions that I have with my colleagues takes place," the late Jack Marburger, Bush’s science adviser, said in a February 2005 event at the University of Colorado, Boulder.

Regulatory decisions in the Trump administration, a number of which have gotten off to false starts for one reason or another, have also been made without input from a science adviser.

That’s important because while each agency has its own scientists, they look at issues narrowly and within their jurisdiction. A scientist studying the causes of smog at U.S. EPA, for example, may lack the expertise to judge its public health effects that someone at the Centers for Disease Control and Prevention possesses. That’s also why the Office of Information and Regulatory Affairs has consistently consulted the science adviser when devising regulations.

"When I was at OIRA, we worked closely with OSTP on developing risk analysis guidelines," Susan Dudley, who was Bush’s OIRA chief and now directs the George Washington University Regulatory Studies Center, said in an email. "They had the lead on biotech & nanotech, and convened interagency meetings on policies related to those."

Consider the climate and environmental actions that have occurred without anyone coordinating scientific efforts: delaying new ozone standard implementation (which was retracted), nixing methane emissions standards for oil and gas operations on federal land (currently held up in the courts), approving the pesticide chlorpyrifos, and overseeing the potential repeal and redrafting of the Clean Power Plan.

"It’s clearly a problem because people who are not technical experts are making political judgments about science," said Kathy Jacobs, who directed the National Climate Assessment at OSTP under Obama from 2010 through 2013 and is now director of the Center for Climate Adaptation Science and Solutions. "There are consequences for people’s health."

Marburger didn’t have the "assistant to the president" title, and his office was moved several blocks away from the White House to a nongovernment building. On the flip side, Holdren had considerable input on climate change and other science priorities.

Although Marburger was criticized for having to defend Bush policies and mischaracterizations of the science on climate and other matters, he was seen as someone who genuinely respected the work of scientists. He also played an instrumental role in ameliorating disagreements between agencies and taming some of the officials who were more opposed to climate action, said Dan Walker, who was at OSTP from 2006 until 2009.

The difference between the Bush presidency and the current one is that there’s no one to check political instincts with science, said Walker, who is now the associate director of multidisciplinary studies at the Center for Technology and Systems Management in the University of Maryland’s civil and environmental engineering department.

"If the agencies’ conclusions conflict with the administration’s policy positions, there’s nobody in the middle to play referee," he said. "That’s a problem, because without OSTP, there is no process. But what it seems to reflect is the administration doesn’t think there needs to be a process, and that policy will always trump science."