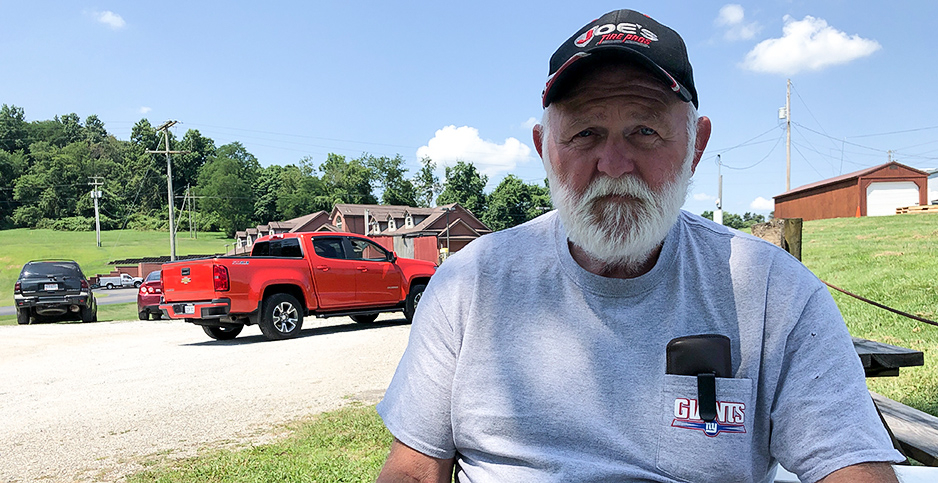 West Virginia resident Chuck Albus, who used to work in coal mines and now owns a chicken and rib stand, said coal jobs get to be a "way of life." Kelsey Brugger/E&E News

WHEELING, W.Va. — Three years ago, Dean Biggs was one of the few people to vote for Democratic presidential candidate Hillary Clinton in this old steel mill town along the Ohio River.

It’s a fact he rarely shares in Wheeling, which President Trump carried by 30 percentage points.

Adding a dash of black pepper to his Guinness at the River City restaurant downtown, the 60-year-old explained he’s since warmed to the president, largely in response to his "energy dominance" agenda.

Watching a stream of Trump donors pop in for a drink ahead of a fundraiser for the president across the street, Biggs said he — like his friends and neighbors — believes that "the deregulation of the whole system" overall contributed to the nation’s energy boom. He doesn’t agree with those who say the Obama administration’s lift of the oil export ban and support of hydraulic fracturing, among other things, drove change.

"Getting out of the Paris accord — we needed to do that," said Biggs. "It saves us from paying into an agreement that would kill jobs in this country. It would have just decimated coal and oil. We are the No. 1 energy-producing country in the world."

Three years ago, voters in the Mountain State rallied around Trump. Now, their affinity for Trump appears to have intensified even as they acknowledge he may not be able to save a stumbling coal industry — and, by extension, their pride and lifestyle here.

Trump’s approval rating in this once-blue state has grown by 18 net points since his inauguration, according to recent Morning Consult polling. The state only has five electoral votes, but it serves as a microcosm of parts of Trump country — a place where, for many, the president could do no wrong even if he failed to deliver on some promises.

Trump backers point out that the state has seen gross domestic product growth due to pipeline construction and coal exports, and they speak gleefully about the multimillion-dollar homes that have been built on once barren land.

"We own a business, and it helped our area," said Gina Purpura, a Wheeling native who greeted Trump at the tarmac ahead of a recent private fundraiser hosted by coal magnate Bob Murray, referring to the GDP growth. "[Trump has] kept us in business. We own a dealership, and a lot of our customers buy trucks from the coal company. So the economy for us is really good."

Another Trump fan on the tarmac who asked to remain anonymous agreed, saying, "We’ve lived here all of our lives, and it’s the best economy we’ve had."

Many here say their economic success is tied to coal, even if they cannot always cite specific Trump policies that have helped them.

Environmentalists say that any short-term gains from coal will evaporate, and they emphasize the public health and environmental risks associated with mining. The administration is looking to the past for economic growth rather than renewable energy jobs of the future, they say.

Coal "is a finite resource," said Vivian Stockman, spokeswoman for the Ohio Valley Environmental Coalition, noting that the U.S. Geological Survey found the Appalachian reserves would deplete in the coming decades.

"So why are we trying to prop up this diminishing resource at the same time the planet is giving us all kinds of signals that maybe we better cut down on carbon dioxide emissions?"

‘We are finding new miners’

Total coal production in West Virginia peaked in the 1990s at 181 million tons annually; it’s currently about half that at 99 million tons. That is up from 85 million in 2016, according to the association’s data. As a result, coal mining jobs have increased by 20% in the state since Trump took office, the association said.

"We are finding new miners to come on board — red hats," added association President Bill Raney, referring to entry-level miners who wear red hats for their first six months and work under supervision. "That is very encouraging." They can earn up to $80,000 a year base salary, he said.

The U.S. Energy Information Administration does not have state-specific data, but nationwide trends show U.S. coal export jumps in both thermal and metallurgical shipments last year — their highest point in five years. But the increase still pales in comparison with the overall drop in coal production over the last decade as coal-fired power plants steadily retire.

Bostic said that the Trump administration treats the industry better than the previous one did.

"The attitude is different," he said of the Trump administration. "I’m not going to tell you it’s been a walk in the park. It’s still time-consuming but no longer a blatant attempt [to interfere with environmental permits]."

Bostic added that Congress in 2017 nullified the Stream Protection Rule, which benefited the industry by undoing a bevy of environmental requirements for streams near coal mines. And Trump’s gutting of the Obama-era climate plan provided needed encouragement for investors, he said. The Waters of the U.S. rewrite and pledge to exit the Paris Agreement helped, too, he added.

"So we’ve gone from where we were closing mines, sending massive amounts of people home, disrupting lives and local governments to rebuilding an industry," he said.

Raney alluded to a larger cultural phenomenon driving the change. "A lot of things are almost intangible," Raney said. "We had eight years of an administration that truly wanted to put us out of business."

Environmentalists say that markets are driving coal’s path, not Trump.

Others like Paul Corbit Brown, president of the Keeper of the Mountains Foundation, did not rebut the notion that the Trump administration has helped coal.

"The real question is, what has he done about the future?" he said. "What’s going to be left for West Virginia if we keep beating the coal drum? Have jobs happened? I don’t know. It often feels like a very desolate place, last to be thought of."

And he grumbled that the state’s nickname is "the Coal State."

"I’d like to reframe that," he said. "We fueled the Industrial Revolution, so why are we not the appropriate people to lead the green revolution?"

The Trump administration has had mixed success in enacting policies intended to boost the nation’s sagging coal industry.

After rescinding the Obama-era Clean Power Plan, the administration enacted the Affordable Clean Energy rule, but the effects on the coal industry remain to be seen. And in 2017, the Energy Department proposed a plan to bail out floundering coal and nuclear plants, but it fell apart after legal concerns mounted from administration officials.

Bissett said Trump "can convince us all day he’s going to put the coal miners back to work," but "the line of demarcation is convincing the public utilities" that there is a foreseeable future for coal.

"The tariffs are very concerning," he added. "A lot of [coal] goes to China and India."

And yet most voters in the state will support Trump, barring a "major, major scandal," said John Kilwein, a political science professor at West Virginia University.

"Everything Trump is doing appeals to the blue-collar base," he said, adding, "It’s really unfortunate that the best job in the state are tied to two dying fossil fuel industries.

"I think the electricity producers read the writing on the wall. … They are switching to natural gas — cheaper and the added benefit that they look better because of the environment," Kilwein added.

Recently, the administration has ramped up its messaging around what it’s casting as a new hope for West Virginia — the Appalachian Storage Hub. Sen. Joe Manchin (D-W.Va.) has pushed for the natural gas facility along the Ohio River, signaling a shift in political momentum from coal to natural gas.

Wheeling is in the northwestern part of West Virginia, which sits atop the lucrative Marcellus and Utica shales — significant crude oil and natural gas plays. West Virginia’s natural gas reserves are the fourth largest of any state, according to EIA.

Peeking out of the foothills along the highway are billboards that read, "If your lights are on, thank a coal miner."

The billboards are a not-so-subtle reference to the tension that exists between oil and gas — two fossil fuels that several Democratic presidential candidates pledge to largely, if not entirely, phase out should they win in 2020.

One woman, a Trump supporter who declined to give her name citing her employer, said, "Mmm, little bit, yeah," when asked about the tension between the two fuels.

When asked about the Green New Deal, many West Virginians laughed off the idea — "The Democrats are in outer space somewhere," as one put it — while at the same time revealing a bit of fear.

"They care more about it than you think," one man said about the Green New Deal. "They want to work."

While some expressed concern about the environment, others dismissed the notion that climate change could be a global crisis. One of those naysayers was Kirk Boughner, a retired mortician from Belmont County, Ohio, who sat at the Newellstown Diner in Clairsville, Ohio, about a 15-minute drive west of Wheeling.

"Humans can’t melt the Arctic," said Boughner. "You have to listen to the guy upstairs."

‘On their way out’

Not everyone in Wheeling agrees that West Virginia’s future is with coal.

Chuck Albus, the 69-year-old owner of a chicken and rib stand off Highway 40 in eastern Ohio, spent a decade of his life in the coal mines of West Virginia. Enjoying a "half bird" — or half a roasted chicken — and a can of Coke, he explained how his years working construction in the coal mines were spent hunched over in confined spaces.

"A lot of people tried mining and didn’t like it depending on the mines," he said. "You had to work on your knees and cry a lot."

He continued: "I’m sure they fear for their safety, but it gets to be a way of life. That’s your job. You go in and do it; you don’t think too much about something going to happen real bad."

Sitting at a picnic table near his stand — a weathered food truck with "Houston’s Chicken and Ribs" painted on one side, Albus spoke about the pride West Virginians continue to feel about their connection to coal, reflected by trucks in town showing off "Proud Coal Miner" bumper stickers.

Coal remains something of a cultural phenomenon here, a touchstone of America’s past while its future is murky.

"They are probably on their way out, I hate to say that," Albus said.