Trump hates hair spray regs. But does he have an energy policy? 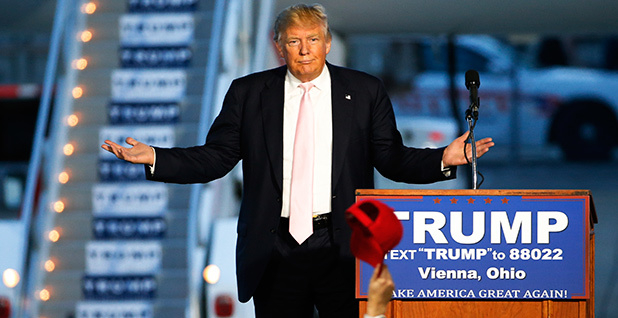 Donald Trump, who says climate change is a hoax, doesn't appear to have an energy adviser. Photo courtesy of AP Images.

Donald Trump is loaded. He has 673 delegates, billions of dollars and a gun permit. But he doesn’t seem to have a coherent policy on energy and climate.

Trump to this point has offered campaign pitches rather than policy positions on issues related to greenhouse gases, fossil fuel development and renewable electricity. It appears that the Republican front-runner hasn’t hired a top energy adviser, according to multiple GOP analysts who work on the issue.

"I haven’t seen any evidence that he’s got somebody working with him directly on energy policy," said George "David" Banks, a former climate aide in the George W. Bush administration. "At some point, look, he’s going to have to do that."

Trump has won 19 states and more than half of the 1,237 delegates needed to secure the nomination. Several advisers interviewed for this story expressed skepticism about working for Trump based on his controversial remarks and his inattention to federal policy.

One person who has advised Republican presidential candidates described Trump’s understanding of environmental regulations as "pathetic" after hearing him say that aerosols from hair spray can’t escape his luxurious apartment in New York City. Ozone-depleting compounds in hair spray were outlawed in 2010.

Others aren’t opposed to working with the man under the red trucker hat.

To some, Trump’s omissions represent an untapped policy well. Who knows, maybe he’s less obstructed by ideology and political history than other candidates, said Phil Kerpen, a conservative policy analyst who’s offered to provide his insights to the Trump campaign.

"With a campaign like Trump’s, where a lot of people seem to be committed to sort of raging against him to the bitter end even if he ends up the nominee, I think it would be much more productive to say, ‘Here are some things you can move in a conservative direction on,’" Kerpen said, noting the limited number of positions taken by Trump.

"So it’s almost a green field to have sort of these policy debates and sort of convince him the free market view is the best one," he added.

Kerpen resembles some of Trump’s current campaign advisers. He once worked for Americans for Prosperity, as did Corey Lewandowski, Trump’s campaign manager. Alan Cobb, a Trump consultant, works for the Kansas chapter of AFP.

Kerpen recently said that he offered his expertise to the Trump team but hasn’t been given an answer.

Trump: ‘Are people in favor of that?’

Others are having similar thoughts. One GOP energy adviser said he’s grappling with the idea of pitching his services to the front-runner. Trump isn’t his first choice, and he has "fairly serious reservations" about Trump’s aggressive personality and the appearance that he’s so unmoored from public policy.

"I’ve been looking at Corey Lewandowski’s phone number for, now, five days," said the adviser, who spoke anonymously to avoid angering a different candidate, whom he’s currently advising. "I just get the horrible feeling that 20 years from now we’re gonna look back on it and think, ‘Anybody involved with that was an idiot.’"

It’s not clear whether Trump is entertaining offers, or if the persona he crafted on his hit television show by bellowing "You’re fired" would be directed toward establishment policy advisers. His campaign did not respond to requests for comment about his views on areas like fracking rules, offshore oil drilling and carbon regulations. His spokespeople also didn’t answer a question about who, if anyone, is helping him on energy issues.

Trump has provided previous opinions on certain issues, if not polished policy plans.

He said as president he would slash funding for U.S. EPA. It appears that he hasn’t commented directly on the agency’s Clean Power Plan, though he does criticize EPA regulations generally as costly exercises in government overreach.

On fossil fuels, Trump has largely spoken on the margins in this race. He has attacked President Obama and previous administrations for not taking Iraq’s oil before it could be used by the Islamic State group. He has also criticized Obama for not destroying Middle Eastern oil wells under the influence of Islamic fundamentalists because, he says, the president is concerned about contributing to the global carbon footprint.

He has expressed support for fracking and made suggestions that domestic oil and natural gas production could be increased. But Trump hasn’t introduced specific plans. At the same time, he accused chief rival Sen. Ted Cruz of Texas of being overly influenced by oil industry campaign donations.

Sometimes Trump’s lack of policy expertise shows through. In February, he declined to take a position on allowing oil drilling 50 miles from the coast of Florida during an interview with the Tampa Bay Times.

"Are people in favor of that?" Trump asked a local reporter during the interview, adding later that an expansion of offshore drilling would be "a little bit of a shame because there’s so much fracking, and there’s so much oil that we have now that we never thought possible."

"That’s an issue I’d absolutely study and do the right thing," he added.

But those prescriptions are easily outshined by Trump’s bombastic comments.

Trump provided perhaps his most expansive views on environmental regulation in a South Carolina rally at the end of December. He entertained his audience by balking at EPA regulations restricting ozone-depleting substances, some of which were once used in pressurized cans of hair spray.

"But it’s sealed, it’s beautiful," Trump said of his apartment. "I don’t think anything gets out. And I’m not supposed to be using hair spray."

He then transitioned into a series of comments on climate change.

"But think of it. So Obama’s talking about all of this with the global warming and the — a lot of it’s a hoax, it’s a hoax. I mean, it’s a money-making industry, OK? It’s a hoax, a lot of it. And look, I want clean air, and I want clean water. That’s my global — I want clean, clean crystal water, and I want clean air. And we can do that, but we don’t have to destroy our businesses. … And by the way, China isn’t abiding by anything," Trump continued. "They’re buying all of our coal; we can’t use coal anymore essentially. They’re buying our coal, and they’re using it. Now when you talk about the planet, it’s so big out there — we’re here, they’re there, it’s like they’re our next-door neighbor, right, in terms of the universe. Miss Universe, by the way, I made a great deal when I sold — oh, did I get rich."

Hamm and Trump are friends

The Republican energy adviser who’s helped presidential candidates in the last two elections suggested that those kind of comments might make it difficult for Trump to recruit an experienced policy professional to help steer his campaign. But he might not have to.

"That’s pathetic. It’s beyond laughable," the adviser said of Trump’s comments. "I’m sure he doesn’t know the difference between CO2 and carbon monoxide. But that’s what this man is, and he’s figured out the pulse on what’s selling right now. He doesn’t have to worry about the nuts and bolts of any particular policy, whether it’s energy or anything else."

Congress is one place where candidates often go to fill their policy needs. In 2012, Sen. Lisa Murkowski (R-Alaska) and her staff on the Energy and Natural Resources Committee worked closely with Mitt Romney. The former Republican presidential nominee recruited at least two staffers from the committee, including his full-time energy adviser, Rebecca Rosen.

"We made a concerted effort to help Romney," said Robert Dillon, Murkowski’s former communications director who now works at Strategies 360. "But I am not aware of anybody who is helping Trump. I think he has his own people and his own thing. We’re kind of mainstream Republicans."

Earlier this month, there was speculation that Harold Hamm, the billionaire oilman who helped guide Romney’s campaign, might be joining forces with Trump. He told The Wall Street Journal that Trump is "unstoppable" and called on conservatives to line up behind him.

Hamm’s spokeswoman, Kristin Thomas, said the oil executive hasn’t committed to a candidate, and she declined to confirm or deny whether Trump has sought to recruit him. She noted that Hamm and Trump have known each other for a long time.

"But at the end of the day, we’re not doing anything until there’s a candidate," Thomas said.