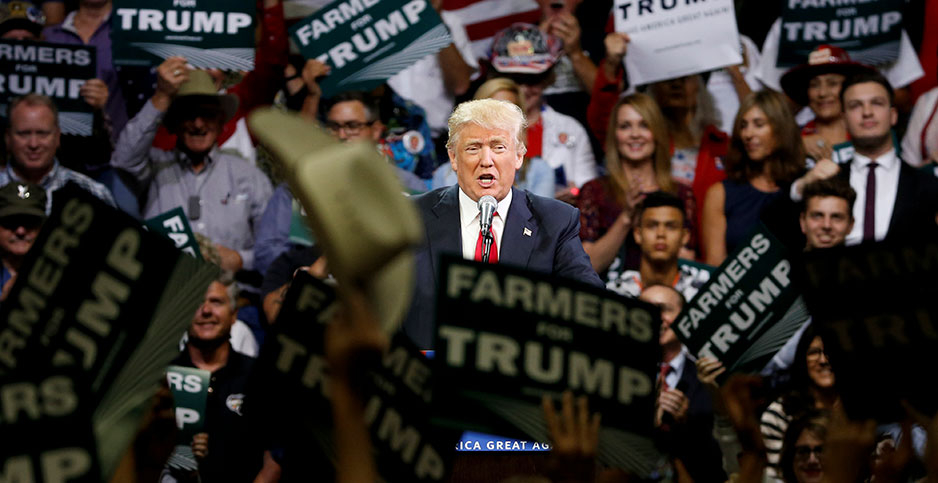 President Trump held a rally in Fresno, Calif., during his campaign in 2016. He will visit the southern San Joaquin Valley next week. Jonathan Ernst/REUTERS/Newscom

President Trump will splash into California’s perpetually roiled water world next week when he drops by the southern San Joaquin Valley city that’s home to his biggest House booster and proximate to some of the state’s biggest dilemmas.

The president can also expect a warm welcome in a county dependent on agriculture and the oil and gas business, where he beat Democrat Hillary Clinton in 2016 by a 53% to 40% margin.

Trump’s Bakersfield visit was reported as confirmed by GV Wire and other valley news organizations, although details — including the date — were unclear.

Trump is scheduled to attend an evening rally in Phoenix on Wednesday, according to his reelection campaign.

The Trump California visit would roughly overlap with a reported appearance by Interior Secretary David Bernhardt as the headliner on a forum on California water with Rep. Devin Nunes (R-Calif.), another staunch defender of the president. These details, too, have not been publicized.

The expected visit would be Trump’s first trip to the San Joaquin Valley region since his 2016 campaign. He will likely tout steps he’s taken to fulfill a promise he made then: to deliver more water to the valley’s farmers. His perspective is not subtle.

"Governor Jerry Brown must allow the Free Flow of the vast amounts of water coming from the North and foolishly being diverted into the Pacific Ocean. Can be used for fires, farming and everything else. Think of California with plenty of Water!" Trump tweeted on Aug. 6, 2018.

Trump signed an executive order seeking to streamline environmental reviews of water deliveries, and the Interior Department has since released biological opinions that would allow more water to be bumped from California’s water hub, the Sacramento-San Joaquin River Delta east of San Francisco.

But the proposal has sparked criticism from environmentalists who say it doesn’t go far enough to protect endangered fish like salmon and delta smelt.

The delta, from which water is shuttled to farms and cities in the state’s arid south, has also become a major point of contention between Trump and Newsom.

Water from the delta is pumped to both the federal Central Valley Project and California’s State Water Project.

The state and feds appear on a collision course over control of those delta pumps. Newsom has threatened to sue the administration over the biological opinions, but he has yet to do so (Greenwire, Nov. 22, 2019).

It’s about more than water

The president may also target Newsom on oil and gas.

Trump’s administration has proposed opening up more public lands in California to oil and gas development.

Newsom, however, unveiled a suite of actions last year in response to spills in Kern County. They included a moratorium on permitting of wells that use high-pressure steam.

"These are necessary steps to strengthen oversight of oil and gas extraction as we phase out our dependence on fossil fuels and focus on clean energy sources," Newsom said in a statement then.

California was once a top three oil-producing state, though the industry appears in decline. And 70% of production is in Kern County.

Newsom’s announcement sparked outrage in Bakersfield, leading to a contentious Kern County board of supervisors meeting last January where more than 1,000 people showed up.

Bernhardt represented the Independent Petroleum Association of America while in private practice.