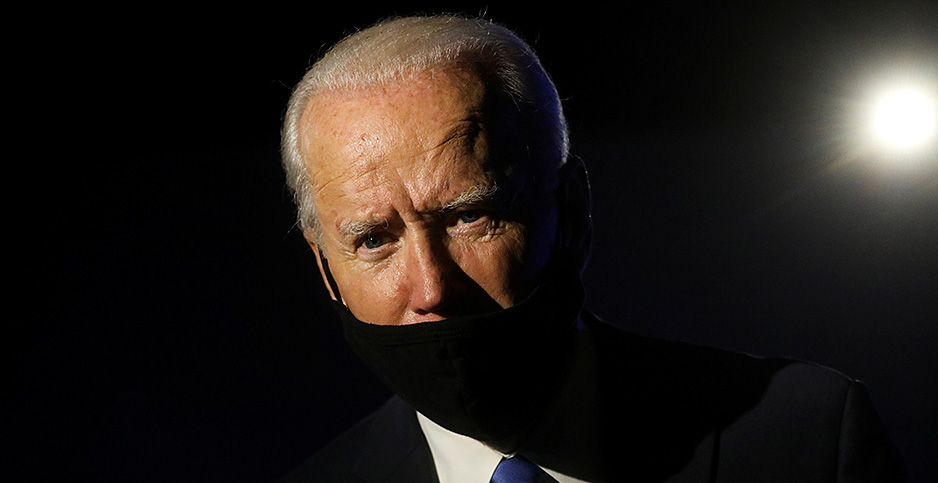 Democrat Joe Biden said during the presidential debate Thursday that he supports transitioning away from oil. Leah Millis/REUTERS/Newscom

President Trump famously bludgeoned Hillary Clinton in 2016 with her pledge to "put a lot of coal miners and coal companies out of business." The president hopes he can repeat the trick with Joe Biden’s aim to "transition from the oil industry."

The question facing Trump is whether the electorate has changed apace with America’s energy industry. He confronts a profoundly different energy landscape than the one he encountered four years ago when he ran against Clinton, the former secretary of State and 2016 Democratic presidential nominee.

The coal industry — far from roaring back to life — is collapsing under its own weight. Hours before the debate between Trump and Biden on Thursday, the owner of Black Thunder, America’s second-largest coal mine, announced plans to wind down work there. Coal production and employment are at multidecade lows (Climatewire, Oct. 24).

Oil faces its most precarious moment in decades. Exxon Mobil Corp.’s share price has fallen so far that it was delisted from the Dow Jones Industrial Average (Energywire, Aug. 25) . BP PLC is talking about reducing production and getting into clean energy (Climatewire, Aug. 5). So is Royal Dutch Shell PLC, which has said it wants to become the world’s largest electricity company. Analysts are debating whether the world has hit peak oil demand (Climatewire, May 7) .

Renewables, meanwhile, are booming. They now generate more electricity and employ more people than coal. NextEra Energy Inc., a Florida-based utility with the largest renewable fleet in the United States, rivals Exxon as the most valuable energy company in the nation (Energywire, Oct. 5) .

"I think this is like when a football coach uses an old play that has been figured out by the opposition," said Jamal Raad, co-founder and campaign director of Evergreen Action, a political action committee dedicated to electing climate hawks. "Donald Trump said wind doesn’t work. Tell that to the folks in Texas, Iowa and places wind is being produced. You can’t drive down a highway in Iowa without seeing a truck with a turbine."

The danger for Biden, the Democrats’ 2020 presidential nominee, is if his comments assume the symbolic resonance of Clinton’s remarks. The coal industry is a relatively small employer. About 185,000 people worked mining, shipping or burning coal in power plants nationwide in 2019, far less than 370,000 employed by wind and solar, according to the Energy Futures Initiative.

But Clinton’s comments about coal took on symbolic weight, helping elevate the issue beyond the coal fields of Appalachia and Wyoming, where the electoral outcome in 2016 was never in doubt. Across the Upper Midwest that year, traditionally Democratic communities where coal plants closed swung hard in favor of Trump.

Oil and gas is a far bigger industry, employing 1.4 million people nationwide. And while oil and gas production is limited to a handful of states, its influence reaches across the country in the form of power plants, refineries and gas stations that rely on hydrocarbons. There’s also this: The death of oil and gas has been foretold many times before, only for the industry to roar back to life. Perhaps sensing the danger, Biden later walked back his comments, telling reporters after the debate, "We’re not going to get rid of fossil fuels. We’re going to get rid of subsidies for fossil fuels."

Industry representatives said they thought the remark would hurt Biden but were unsure it was enough to derail his presidential aspirations.

"If it makes a difference in the election, it will be because it reinforced the notion there are larger forces driving Joe Biden," said Thomas Pyle, president of the industry-backed American Energy Alliance. "There is an underlying concern that he is being driven by Bernie and AOC a little bit."

Still, he saw a difference between Biden’s comments, which were largely in line with what the Delaware Democrat has been saying throughout the campaign, and Clinton’s comments four years ago.

"The elements of the coal comment were the manner by which she said it, combined with the ‘deplorable’ gaffe, and President Trump was making a strong case these people didn’t care about you," Pyle said. "That is not as solid a theme when you’re running against Biden, for a whole host of reasons. He is just Joe."

Frank Maisano, a senior principal at Bracewell LLP, said the comment is likely to gain traction in only a limited number of states that are in play electorally this year.

Climate hawks think this year is different, arguing that the vice president’s comments merely reflect what voters increasingly want. They pointed to a recent New York Times/Siena College poll that found roughly two-thirds of respondents supported Biden’s $2 trillion clean energy plan. A Morning Consult poll conducted after the debate found that 57% of Americans supported a transition away from the oil industry, with 28% unopposed.

The change in public opinion has been mirrored on Wall Street and in corporate boardrooms across the country.

Corporate commitments to green their operations could be tested by a Biden administration, which likely would seek to push further than some companies are willing to go. But the value of clean energy companies today speaks to society’s desire for change, analysts said.

"As someone who ran a solar business, it is very different than it was four years ago. The train has left the station. Smart companies know this is the direction we’re going," said Nicole Steele, a founding partner at Insight Power Partners and a co-chair of Clean Energy for Biden, a network of clean energy professionals backing the former vice president.

"From my perspective, Biden is doing this right," Steele said. "He’s acknowledging we need a bridge fuel and laying a real strong frame of action to create clean energy jobs."

The growth of clean energy has been accompanied by a series of climate-induced disasters, ranging from wildfires in the West, flooding in the Midwest and hurricanes along the Gulf Coast. Pete Maysmith, senior vice president for campaigns at the League of Conservation Voters, said a growing number of Americans have had an experience this year like his father, who was forced to evacuate from his Colorado home last week due to wildfire risks.

Voters’ urgency over climate is now being reflected by politicians. A host of Democratic candidates put forward in-depth climate plans during the presidential primary this year, and Biden has run with the issue since winning the nomination — making it a feature of his remarks on the stump.

"People’s lived experience is different now than it was four years ago," Maysmith said. "The urgency is more obvious now. Voters are demanding that candidates have big plans and bold plans, and that is what I think you’re seeing with Joe Biden."