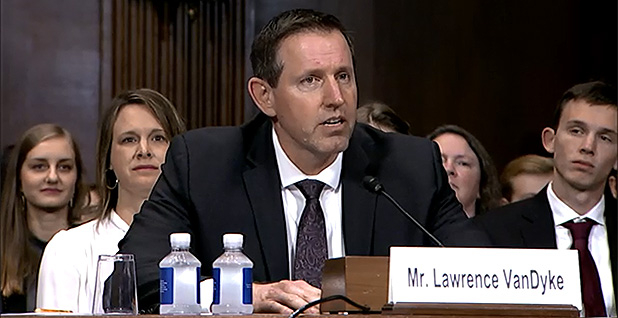 Lawrence VanDyke, a new judge on the 9th U.S. Circuit Court of Appeals, during his confirmation hearing. Senate Judiciary Committee

Green groups say they are concerned that those judges — including Lawrence VanDyke, whom the Senate confirmed 51-44 yesterday to a lifetime position on the 9th U.S. Circuit Court of Appeals — could sway decisions on environmental cases long after Trump leaves office.

The Senate also voted this week to confirm Patrick Bumatay to a seat on the California-based appeals court, whose jurisdiction spans nine West Coast states.

"The 9th Circuit covers about two-thirds of our nation’s public lands, about half of our endangered species and national parks, and the majority of our coastlines," said Ben Driscoll, judiciary director for the League of Conservation Voters.

"The Supreme Court gets a lot of attention, but 99% of the environmental cases that the 9th Circuit decides are going to stay right there," he added.

But while the president has increased the odds that any randomly selected three-member panel will include a judge tapped by him, the 9th Circuit still contains a majority of jurists who were appointed by Democratic presidents, said Jeff Holmstead, a partner at Bracewell LLP.

Ideological splits are most notable when courts are questioning agency authority to craft regulations such as the Clean Power Plan, said Holmstead, who previously served as a clerk for the U.S. Court of Appeals for the District of Columbia Circuit, another key bench on environmental issues.

The Obama-era regulation capped greenhouse gas emissions from power plants. Trump’s EPA has since repealed and replaced it with its own Affordable Clean Energy rule. VanDyke fought against the Clean Power Plan while serving as solicitor general of Nevada.

The Clean Power Plan "was based on a dramatically expanded reading of one provision of the Clean Air Act, which had never been read that way before," said Holmstead, who also served as an EPA official in the George W. Bush administration.

"Democratic appointees seemed sympathetic to that, and Republican appointees were reluctant to allow agencies to find broad new authority."

By considering judicial appointees such as VanDyke, who lacked support from the American Bar Association and from home-state senators, Republicans in the upper chamber may have set the stage for contentious partisan battles over judgeships for years to come, legal experts say.

During a hearing before the Senate Judiciary Committee, VanDyke was moved to tears after lawmakers questioned him on the ABA’s finding he was "not qualified" to serve on the 9th Circuit, based partly on concerns over his ability to extend fair treatment to LGBTQ litigants (E&E Daily, Oct. 31).

"If Democrats are fortunate enough to take the presidency and have a majority in the Senate, they will be ‘tempted’ to engage in dramatic payback given what the Republicans have done since 2015 when they took over the Senate," said University of Richmond law professor Carl Tobias.

"Merrick Garland is all you have to say, but there are many other traditions that have not been honored," he continued.

Senate Republicans refused to hold a hearing to consider then-President Obama’s selection of Garland, a judge for the D.C. Circuit, to replace the late Supreme Court Justice Antonin Scalia.

Tobias noted that most of Trump’s picks for the 9th Circuit replaced judges who had been appointed by Republican presidents.

Vanderbilt University Law School professor Brian Fitzpatrick said he is not concerned about the trajectory of the 9th Circuit under Trump.

"Democrats will pick liberals, Republicans will pick conservatives, but, hopefully, both sides will pick smart, intellectually honest people," Fitzpatrick wrote in an email.

"For all his failings, that is what Trump has done on the Ninth Circuit," Fitzpatrick continued. "I am not worried."