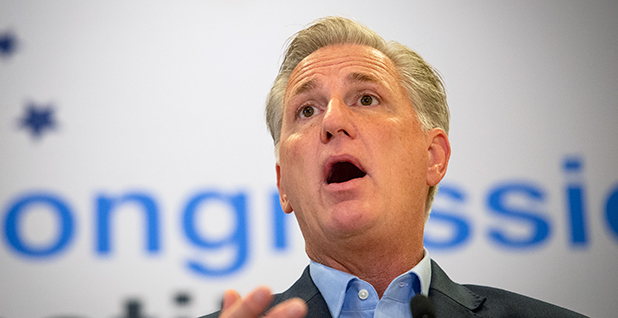 BALTIMORE — Republicans gathered here to plot strategy for taking back the House majority in next year’s election believe they could get help from an unlikely source: the progressive Green New Deal.

President Trump and leaders meeting for a three-day House GOP retreat took turns bashing the sweeping plan for eliminating carbon emissions that they paint as a sign of creeping socialism. The president and GOP said they believe they can gain the 19 seats needed to take back the House.

"The Green New Deal, we just want that thing to go as long as it can," Trump told Republicans at a dinner last night. "Anybody that can win office promoting the Green New Deal, they deserve to win [because] they have the greatest line of crap anybody has had in the history of politics."

Trump suggested Republicans withhold their attacks on the Green New Deal and leader sponsor Rep. Alexandria Ocasio-Cortez (D-N.Y.) until closer to the elections so Democrats would not have time to reverse their positions.

Despite his own warning, Trump went on to argue the plan to achieve zero emissions by 2030 is "insane" and "crazy," warning it would cost trillions of dollars and eliminate cows and planes.

House Minority Leader Kevin McCarthy (R-Calif.) told reporters this morning the Republicans can take back the House next year by drawing contrasts with Democrats on economic issues, including the costs of environmental regulation.

"We want to make sure we protect the environment and look to contrast between the Green New Deal that lowers the economic life of all Americans," he said.

McCarthy, for example, called for Congress to invest more in carbon capture plants and technologies, which would not only curb emissions but create new jobs. He also said rather than backing bans on plastic straws like one proposed in California, the GOP should focus on the real source of ocean plastics: pollution from overseas waterways.

Minority Whip Steve Scalise (R-La.) said as he has visited swing districts around the country in recent months, he finds more voters are aware of the Green New Deal than they are the Paris climate accord.

Scalise said Republicans will argue that the Green New Deal would only increase carbon emissions globally because it would force manufacturers to leave the United States to escape regulations and build plants in countries with far fewer guards against emissions.

Trump’s environmental comments were not limited to the Green New Deal; he also touted his pullout from the Paris accord, mocked limits on plastic straws and made sure to highlight his recent move to ease rules aimed at having more energy efficient lights.

"No. 1 to me, the light’s not good — I look orange and so do you, the light’s the worst," said Trump to much laughter. More seriously, he said, he opposes the shift away from incandescent lights because the new models are more expensive and create hazardous materials when they break.

Rep. Greg Walden of Oregon, the ranking Republican on Energy and Commerce who led successful efforts to keep the House majority in 2014 and 2016, said it’s too early in the election cycle to say what issues the GOP should emphasize, but he noted Democrats could be hurt if their presidential nominee moves too far to the left.

But ultimately, Walden said, issues vary and races are won district by district. He noted in his rural eastern Oregon district wildfires have been a top concern of voters.