Trump ignored his notes to talk about the environment 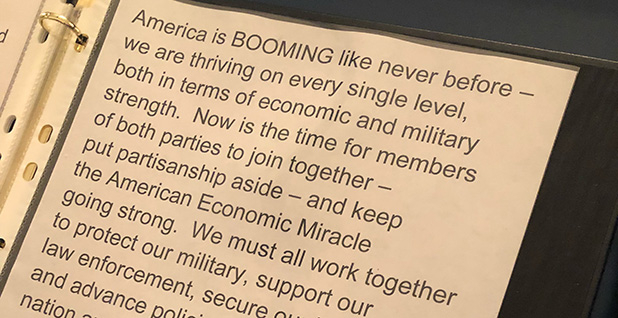 President Trump during a contentious press conference last week improvised his lines about the environment and how it could be an important area for bipartisan cooperation.

In his scripted introduction last Wednesday, Trump emphasized the areas on which he wants to work with Democrats, who won control of the House. He was reading from typed notes in a three-ring binder. He mentioned prescription drug prices and infrastructure. He also listed border security and law enforcement.

Then Trump inserted a line on the fly. It wasn’t in his prepared remarks, according to photos of his notes taken by E&E News after the event. Looking up from his notes, Trump said he wanted Democrats and Republicans to work together on environmental policy.

"We must all work together to protect our military — I have to do that — to support our law enforcement, secure our borders, and advance really great policy, including environmental policy," he said. "We want crystal-clean water. We want beautiful, perfect air. Air and water, it has to be perfect."

It’s unclear why Trump would single out the environment. His administration has worked aggressively to roll back regulations that limit air and water pollution. The White House didn’t respond to a request for comment.

This week, the Trump administration announced that it was increasing emissions controls on some heavy trucks, a rare effort to strengthen one environmental rule.

At the press conference, Trump often read sentences exactly as they appeared on his prepared notes, which reporters photographed on a lectern. He also veered off script when attacking members of his own party for failing to be re-elected.

When he got to one section of his notes, which included a handwritten line that read "candidates and campaigns matter," Trump sharply departed from the script. He targeted Republicans who did not "embrace" him. Trump ticked off their names, including several members of the Climate Solutions Caucus.

"You had some that decided to ‘let’s stay away,’" Trump said. "They did very poorly. I’m not sure that I should be happy or sad, but I feel just fine about it."

For their part, Democrats expressed confidence that they could work with Trump on environmental and climate policy.

Voters of both parties care deeply about clean energy, reducing pollution, land conservation, ocean health and protection from wildfires, said Luke Bassett, a former climate adviser with the Obama administration who now works for the Center for American Progress, a liberal advocacy group.

He said that if Trump is serious, Republicans and Democrats could forge compromise on wind energy, which is important in places like Texas and Iowa. He said he is optimistic but also wary that Trump might sign a bill with environmental protections.

"I think any form of an infrastructure bill, whatever the language that’s used, if it’s a major investment in clean energy, cleaner forms of transportation, in job creation, that boost all of those industries, I don’t think there would be much opposition to it," Bassett said. "I think everyone in the country sees the benefits of these technologies and these industries and wants to employ people in good-paying jobs to work on it."

Almost as soon as he floated environmental policy as a place for bipartisan agreement, Trump strayed from the prepared remarks and went back to familiar Republican talking points about not sacrificing pain for environmental gain.