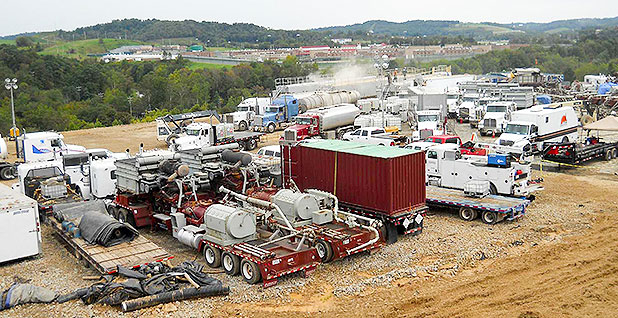 A hydraulic fracturing operation in the Marcellus Shale is shown. USGS/Wikipedia

The Energy Department warned yesterday of dire consequences if the U.S. government bans hydraulic fracturing, fulfilling a directive President Trump made in the final days of his losing presidential campaign.

Although President-elect Joe Biden did not call for an all-out ban on fracking, Trump spent much of the campaign accusing his Democratic challenger of looking to do that, ordering his administration in late October to examine the repercussions such a ban would have on jobs, property values, tax revenues and more (Energywire, Nov. 2, 2020).

In the 80-page report, outgoing Energy Secretary Dan Brouillette said a fracking ban would cost millions of jobs, raise gas prices at the pump and cause electricity bills to spike.

"Such a ban would eliminate the United States’ status as the top oil and gas producing country and return us to being a net importer of oil and gas by 2025," Brouillette wrote in a message accompanying the report. "It would weaken America’s geopolitical standing and negatively impact our national security."

Among other consequences of a fracking ban, the report said, the U.S. economy in 2025 "would have 7.7 million fewer jobs, $1.1 trillion less in gross domestic product, and $950 billion less in labor income." Such a ban would also impede the U.S. recovery from the still-raging COVID-19 pandemic, the report said.

Additionally, the report estimated that drivers would see a roughly $2-per-gallon increase in gasoline prices from the 2020 average price of $2.18 per gallon. DOE said average gas prices would rise "over 100 percent to over $4.20 per gallon in 2022 and 2023," with higher average diesel prices, as well.

The report also characterized natural gas as an "important partner" to renewable electricity by providing "baseload" power to back up intermittent wind and solar resources. A fracking ban "could adversely impact other renewable energy technology growth" on the U.S. power grid, the report said.

Biden’s campaign criticized Trump in November for "playing politics" by commissioning the study rather than addressing the coronavirus.

"Pennsylvanians need real plans and action, not political attacks based on lies," spokesperson Matt Hill said at the time. "President Trump knows that Joe Biden won’t ban fracking, so he’s playing politics with presidential paper as if it will distract from his failures."

Trump lost Pennsylvania — a critical swing state and the country’s second-largest producer of natural gas — by a narrow margin despite his campaign’s efforts to make fracking a top issue in the race (Climatewire, Nov. 12, 2020).

At the time, Steven Winberg, DOE assistant secretary for fossil energy, told members of the media that the report had cost an estimated $200,000 to produce (Energywire, Oct. 7, 2020). That report did not evaluate the impact of a fracking ban but described horizontal drilling and hydraulic stimulation as "central" to shale development.

DOE held a press event to release the previous report, but the report released yesterday was posted on its website without fanfare. The agency did not respond to a request for comment yesterday on the latest analysis.

It was released on the same day Biden’s inauguration team announced that Lady Gaga would sing the national anthem at his inauguration ceremony on Wednesday at the Capitol.

The Trump campaign had blasted the singer as an "anti-fracking activist" when she campaigned with Biden in November — pointing to a 2012 story in which Gaga supported Yoko Ono’s efforts to stop fracking with a petition to New York Gov. Andrew Cuomo (D).

Though some of his rivals for the Democratic presidential nomination embraced a full ban on fracking, Biden took a more moderate stance and said during the campaign that he wants to ban new oil and gas production on federal public land and in federal waters.

That move also faces opposition, including from groups like the American Petroleum Institute, which said this week it would fight such a policy with "every tool available" (E&E News PM, Jan. 13).

And industry analysts have noted that a president would not be able to bar fracking across the country and on private land. That would take an act of Congress, which has shown little interest in doing so.