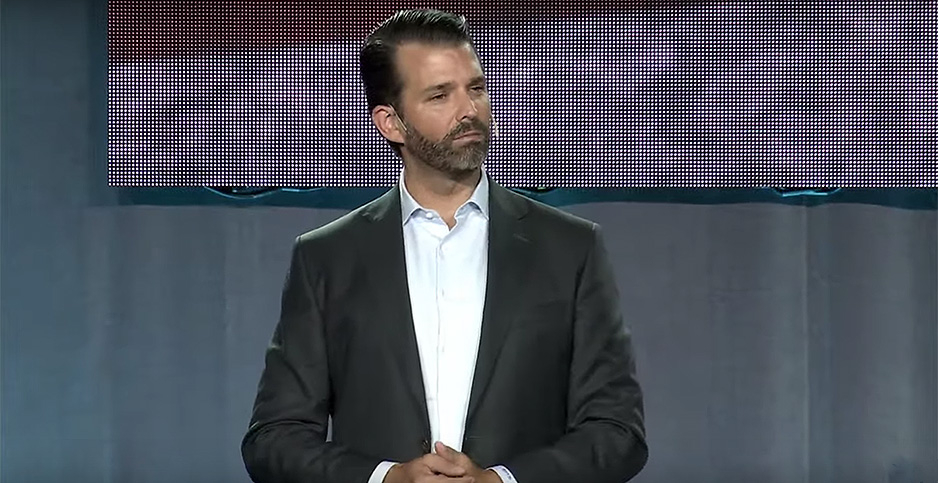 DENVER — Donald Trump Jr., the president’s eldest son, is fond of telling Western audiences about his brief tenure as a bartender in Aspen. He typically uses the anecdote to tout his love of hunting and fishing.

But addressing a crowd of conservative, evangelical Christians on Friday night, he offered up a new twist on his story — dropping any mention of his affinity for the outdoors in exchange for a political attack — an indication that heading into the 2020 election battle, Trump Jr. is more focused on rallying votes from the party’s base than from its hook-and-bullet crowd (Greenwire, July 12).

"Many people don’t actually know this, but when I graduated from the Wharton School of Finance, I moved to Colorado to be a bartender, true story," Trump told the Western Conservative Summit, an annual conference sponsored by Colorado Christian University.

"It’s like AOC, but then I got a real job before I got into politics," he added, taking aim at freshman Democratic Rep. Alexandria Ocasio-Cortez of New York, who tended bar and worked as a waitress before winning her first term in Congress last year.

In fact, during his 30-minute keynote address to the crowd, Trump made no references to the nation’s public lands, or even the hobbies he often touts in images on his social media feeds.

Instead, Trump spent his time touting his father’s first term in the White House, pointing to economic growth while also criticizing media coverage of President Trump as well as the investigation into whether his father’s campaign colluded with the Russian government during the 2016 election.

The younger Trump also spent a significant portion of his speech railing about bias against Republicans on social media sites such as Twitter and Instagram, including allegations of "shadow-banning," in which platforms decrease the visibility of conservative users and their content.

"Imagine how many people it’s happening to. If big tech’s doing it to me, it’s kind of a loud bell. Imagine what they’re doing to you. Imagine that power," Trump said.

He went on to frame social media companies and mass media as "the marketing wing of the Democratic Party" and asserted that so-called shadow bans could be a "top three" issue in the next election.

During his remarks, Trump made references to his father’s prolific use of Twitter and mocked his own reactionary use of the platform.

"I have a little bit of the Trump gene; it’s called Tourette’s of the thumbs," Trump said, miming typing a message on a mobile phone. "It took me 41 years to realize I was much more like my father than I ever gave myself credit for."

Colorado Sen. Cory Gardner (R), who is expected to face a competitive 2020 reelection bid, spent much of his 20-minute speech deriding "far-left radical ideas that are rooted in socialism," including the environmental plan along with proposals for single-payer health care and eliminating the Electoral College.

"Just take a look at the Green New Deal: The left knows it isn’t popular, but they continue to advocate for it anyway," Gardner asserted.

"When you look at it closer, you’ll see it’s nothing more than a very thinly veiled attempt to implement the socialist agenda to fundamentally change this country: to gain control of the energy we use, the technology that we create, what car we drive and what job you can or cannot have."

He later added that the "first wave of the Green New Deal has actually crashed into Colorado," referring to legislation signed by Democratic Gov. Jared Polis earlier this year to overhaul state oil and gas regulations (Energywire, April 17).

During a separate panel, members of the Western Caucus likewise criticized the proposal, which Idaho Rep. Russ Fulcher (R) summarized as "bonkers."

"When I first heard of the Green New Deal, I immediately mentioned to my communications person, this should be the ‘Red New Disaster,’" Fulcher joked, explaining that he was linking the plan to "communist red."

Fulcher also suggested the environmental plan is forcing the "conversation to the left." "We have to take this seriously," Fulcher said.

"There’s nothing good about this bill, nothing," Gosar said.