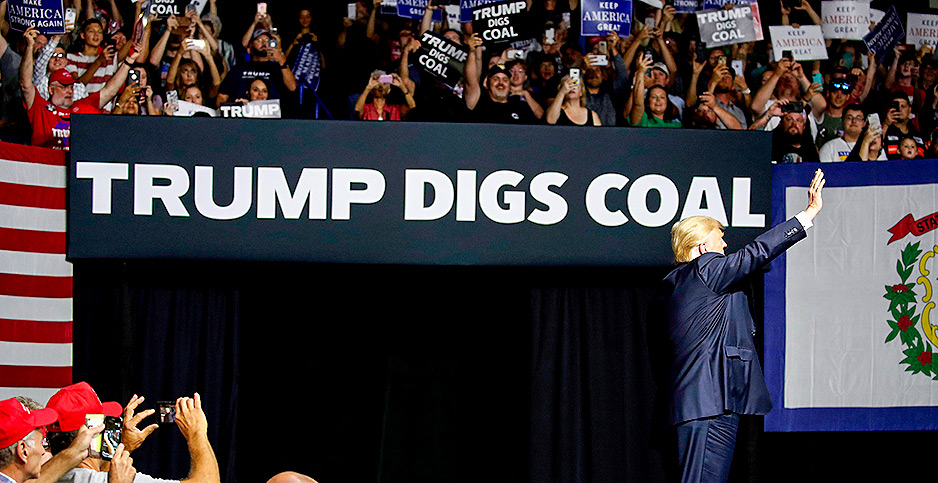 President Trump waved as he arrived to speak during a rally yesterday in Charleston, W.Va. Alex Brandon/Associated Press

CHARLESTON, W.Va. — If there was ever a place to declare that the war on coal was over, President Trump wanted it to be here.

Trump delivered a stake to the heart of former President Obama’s domestic climate policy yesterday. Then he came here to give the eulogy.

By nixing the Clean Power Plan — and proposing his Affordable Clean Energy plan as a replacement — the president swept away the coal industry’s biggest bugaboo. He even got to endorse Republican Patrick Morrisey, the Republican state attorney general who led the legal fight against Obama’s climate plan, as a Senate candidate who’s challenging Democratic Sen. Joe Manchin.

But to many West Virginians inside and outside the Charleston Civic Center last night, Trump is only prolonging a drawn-out battle over energy and its emissions. To them, a cease-fire seems as if it might have a better chance in the long run.

Yet Trump has his fans. They packed the house last night in the Mountain State’s capital. They credit him with slowing coal’s terminal decline. They shouted his name, waved his placards, and wore and purchased his paraphernalia.

"We are putting our great coal miners back to work," Trump said to thunderous applause and cheers. "Great people, great people. Brave people — I don’t know how you do that."

Still, many here know a full-scale reversal isn’t coming, even if the president won’t acknowledge it. Nearly twice as much coal-fired power is slated to come offline this year as in 2017. Mining for coal used in steelmaking is up, but that’s largely due to international market forces, and analysts expect demand to cool.

But Trump won’t admit that. Twin banners flanked the enormous American flag behind him: "PROMISES MADE" and "PROMISES KEPT."

"He can bring back coal to a certain degree, with limitations. But will coal ever be what it was? Hell, no," said Kevin Busby, a 40-year-old maintenance worker in Charleston.

Busby’s history with coal is similar to those of many other West Virginians. He comes from a mining family. His father has black lung disease, and he’s fighting for health care benefits. At the same time, his mother got a ticket to Trump’s rally. And she was excited, to say the least.

"She’s been blowing me up all day," said Busby, a self-described "semi" supporter of Trump.

Trump is popular here, and his administration’s proposal for regulating power plant carbon emissions was met with praise.

"I’m getting rid of some of these ridiculous rules and regulations," Trump said of scrapping the Clean Power Plan.

It’s those types of actions that have endeared Trump to West Virginians. It’s not that they necessarily expect the White House to flip coal’s fortunes — they just want to know he’s giving it an honest effort.

Trump’s supporters said things are better since he was elected. The economy has improved, they said. Some coal jobs are re-emerging. Even if the industry’s heyday never returns, West Virginians feel the White House is finally in their corner.

"Better than the last guy," said William Bailey, 68, as he was heading into the rally. But can Trump bring back coal? "Well, no. But he can help it."

"I don’t really know how much he’s done to revive the coal industry but revive faith in the coal industry," said John Hamilton, a 25-year-old attorney from Huntington. "I think everyone knows it’s not going to be around here for long, but at least they’re not trying to cancel it out."

Coal supporters flocked to the arena. Uniforms with bright orange and yellow reflector strips dotted the seats. "Trump digs coal" signs were scattered everywhere. Some even bought the T-shirt — 54-year-old Stewart Morton showed up wearing it.

A coal miner from Logan, the mustachioed Morton has been out of work after sustaining an injury on a strip mine. He was soft-spoken and said the economy has picked up since Trump’s win. He thinks coal can rebound, but "not as well as before." He’s not sure whether there will be a job for him, either.

So if coal won’t be around forever, what can people in the state do? He laughed reflexively, a decibel or two higher than he was speaking.

"I really have got no idea," Morton said.

Not everyone’s buying Trump’s slogans. Andrea Anderson has a problem with the president — she said he "panders" to the state and its coal legacy. That’s not helping, she said.

A shopkeeper at an antiques and thrift clothing store in downtown Charleston, Anderson said she respects the state’s coal-mining roots. Her mom voted for Trump. Her dad worked as an engineer for mining companies across the state. She knows it’s been the state’s economic backbone.

"He’s used the coal industry to relate to people here and say he’s going to bring back coal jobs, and that’s just not true," said Anderson, 37. "People here feel so culturally disrespected by the rest of the nation, so even when someone comes here and just pays lip service, they gain an advantage."

Trump didn’t try to run from that. He said he asked coal miners whether they’d rather make "widgets or gidgets or gadgets" on the campaign trail.

"These are big, strong coal miners, and they said, ‘Sir, we want to dig coal.’ And I agree with you," Trump said.

But Steven Stratton, 39, knows better than most that coal is dwindling — he collects the industry’s severance taxes for the state. His father and grandfather were miners, so he gets why people have a connection to the industry.

"My dad told me he’d rather see me under a bridge than in a mine," Stratton said. His dad died at 67. That was three years ago next week. His mother is still fighting to get black lung disease recognized as a contributing factor to her husband’s death so she can get some sort of coverage.

But Stratton said, "Once you’re dead, it’s hard to get black lung."

People don’t consider those health effects enough, said Mekell Golden, 49, who works at the state’s public health department. Golden said she worries about the state’s elevated asthma and cancer rates. EPA said in its power plant proposal yesterday that it could result in up to 1,400 more premature deaths per year compared with the Obama plan, due to an uptick in pollution associated with burning coal.

"I don’t think some states should be left to their own device," said Golden, who was born and raised in West Virginia. "It’s scary living here. It is."

Greg Samples said he believes he’ll be the last in his family to work with coal. He did construction at strip mines until the work slowed and eventually stopped in 2004.

Not that the 51-year-old misses it all that much. Strip mining is also called mountaintop-removal mining — it involves dynamiting peaks and pushing the rubble into valleys to access the seams of coal.

"I’ve seen a lot of property destroyed because of strip mining," said Samples. "I didn’t really like it."

He’s noticed the weather is changing — storms are getting stronger. There’s been so much rain. Something is "bound to be different with all the pollution," Samples said, but he doesn’t know whether the coal industry or human activity is necessarily driving these changes.

Others know exactly what they think about it.

"I think it’s horseshit," said Chuck Little, a 79-year-old attorney. "I deal in facts, and I don’t even know what facts are anymore."

Tammy Turner also has a hard time sorting through information about climate change. It’s unclear to her that enough data has been collected to convincingly say much of anything.

The 55-year-old from Harpers Ferry drove six hours to see Trump, so she’s a supporter through and through. She said Obama’s environmental regulations were "misguided and ridiculous" and that she thinks coal can be burned "in a responsible way," primarily through capturing the emissions and storing them.

"We need to be a little safe environmentally because we need the planet to be here for our children and grandchildren," she added.

Some are sending their children another message.

"I tell my children every day to get out," said Denise Thomas.

The 53-year-old attorney was sitting on a bench, smoking a cigarette, on Charleston’s Capitol Street. Her eldest daughter heeded that advice and now lives in Florida. The other two remain in the state.

Thomas gets the tension for coal-affected economies. She acknowledges that Charleston is more insulated from those boom-and-bust cycles given that it’s the state capital. She has friends in the coal industry in Logan County, a hard-up mining county in southern West Virginia that has seen better days.

Thomas said she’s concerned about climate change but knows there’s a lot of people who depend on the industry. That there’s been a bit of a rebound under Trump "is good for the coal miners," Thomas said, though she added that the fuel is becoming "obsolete."

"They want it to be there for their friends and family," Thomas said of her friends downstate. "But the younger generations understand they have to move on."