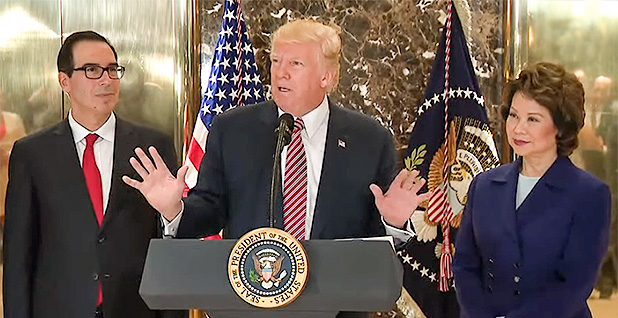 The Trump administration will no longer require public infrastructure projects built in flood-prone areas to accommodate sea-level rise in order to receive federal funding, which critics argued would expose hospitals, schools and roads to the effects of climate change.

President Trump’s executive order on infrastructure yesterday rescinded a 2015 Obama administration directive requiring agencies to withhold funding for projects that fail to address the risks of building in a floodplain (E&E News PM, Jan. 30, 2015). Trump claimed that broad permitting changes would enhance safety by sparking new projects after many were stalled amid increasingly complex regulations.

"If it doesn’t meet environmental safeguards, we’re not going to approve it," Trump said at a news conference yesterday in Trump Tower in New York City. "No longer will we allow the infrastructure of our magnificent country to crumble and decay."

The move comes just days after the National Oceanic and Atmospheric Administration released a report noting that sea level is at a record high (E&E News PM, Aug. 10). It also follows the release of a draft study by 13 federal agencies saying that rising temperatures would lead to more intense and frequent rainstorms, extreme weather events and higher seas (Climatewire, Aug. 8).

Scrapping the so-called federal flood risk management standard earned the rebuke of environmental groups, spending watchdogs and engineers. They said the action disregarded mounting scientific evidence about how climate change would affect floodplains and put taxpayer dollars in jeopardy. They also said it ignores the findings of an exhaustive report from engineers that called for better coordination of flood management policies across federal, state and local governments.

"It results in stuff being built in the wrong places and being built in the wrong ways," Eli Lehrer, president of the right-leaning R Street Institute, said in an interview. The SmarterSafer Coalition, a collection of environmental, taxpayer and insurance groups, of which R Street is a member, said every dollar spent on disaster mitigation saves $4 in recovery and rebuilding costs.

The revoked standard required public infrastructure such as subsidized housing to be built 2 feet above the 100-year flood standard, while critical infrastructure like hospitals and fire departments would need to rise by 3 feet. Many in the environmental community already considered the standard too weak, as it’s based on floodplain maps that they say do not accurately account for future climate change.

Industry groups like the National Association of Home Builders opposed the Obama standard, arguing that it would impose construction costs and deter development.

"The [standard] posed unanswered regulatory questions that would force developers to halt projects and raise the cost of housing," NAHB Chairman Granger MacDonald said in a statement. "This action by President Trump will provide much-needed regulatory relief for the housing community and help American home buyers."

Revoking the flood standard comes as Congress is working to reauthorize the National Flood Insurance Program. It’s earned similar criticism from the SmarterSafer Coalition for incentivizing home construction in flood-prone areas on the taxpayer’s dime. Lawmakers may well make a push on the flood policy Trump ended yesterday, as well. Sen. Brian Schatz (D-Hawaii) tweeted, "I think we are going to have to make a law and take away his discretion here."

Regulations to implement the Obama flood policy are pending at FEMA, the Department of Housing and Urban Development and U.S. EPA, though those will likely come to a halt. Now, projects such as hospitals, schools, roads and utilities that receive federal funding won’t have to take preparations such as elevating structures to avoid damage from flooding and sea-level rise, though local and state governments could still push for such measures.

The flood provision was one of just several elements of the executive action that sought to streamline permitting for infrastructure that’s consistent with Trump’s campaign pledges to ignite a building spree. The Transportation Department said it would implement a process called "One Federal Decision" that "will make the federal government speak with one voice" on environmental reviews and permitting. It also will convene an interagency working group to review each agency’s National Environmental Policy Act review process.

The Obama-era directive sought to address the lack of coordination across governments on flood adaptation. A 2014 report by the American Society of Civil Engineers that assessed weaknesses in flood management in light of Hurricane Katrina and Superstorm Sandy called attention to those disparities and urged more collaboration.

Superstorm Sandy inflicted $50 billion of damage on the East Coast. Other major flooding events have occurred in the years since, with Baton Rouge, La., enduring unprecedented rainfall in August 2016. The state said the flooding cost $8.7 billion. Recent downpours in New Orleans have also inundated that city.

"There’s always been a conflict about dunes on the Jersey Shore. They make it so you don’t have as pretty a view," said Traver, who directs the Villanova Center for the Advancement of Sustainability in Engineering and Villanova Urban Stormwater Partnership. "In Sandy, it was very well-documented that areas that didn’t have dunes flooded out."

Building cities in floodplains invites risk, but climate change is making such incidents more likely. NOAA said nuisance flooding — the type that closes roads and affects other infrastructure — has increased between 300 and 925 percent on all three coasts since the 1960s.

"The effects of rising sea levels along most of the continental U.S. coastline are expected to become more noticeable and much more severe in the coming decades, likely more so than any other climate-change related factor," NOAA said on its website. "Any acceleration in sea-level rise that is predicted to occur this century will further intensify nuisance flooding impacts over time, and will further reduce the time between flood events."

Lehrer of R Street said former President Obama erred in framing the policy as a climate change initiative. The amount of money spent on rebuilding in flood-prone areas alone would have been a worthwhile pitch to conservatives, he said. FEMA says floods caused $260 billion in damage to the United States between 1980 and 2013.

The emphasis on climate put a bull’s-eye on the standard when Trump — who has called climate change a hoax — assumed office. In fact, nixing the flood directive was included in an earlier draft of a March executive order to erase a suite of Obama’s climate policies but was removed at the last minute.

Trump has downplayed the effect of rising sea levels even as many of his own properties face risk from it. He reportedly told the mayor of Tangier Island, Va., which is sinking into the Chesapeake Bay, that he "shouldn’t worry about rising sea levels," according to Mayor James Eskridge (Climatewire, June 15). "Like the president, I’m not concerned about sea-level rise," he told The Washington Post.

The shrinking window to get Trump’s $1 trillion infrastructure bill through Congress means the White House may increasingly lean on executive actions and removing regulations to accomplish its political goals, as the flood move demonstrated. Still, Trump was optimistic about Congress passing infrastructure legislation.