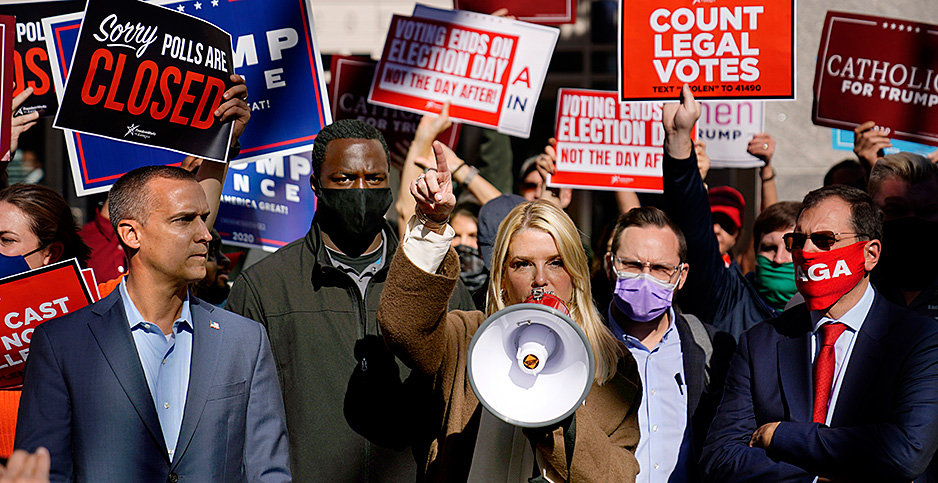 Democrat Joe Biden is continuing to advance in key states’ vote counts for the presidential election as President Trump widens his legal assault.

Tallies continued to roll in from Georgia and Pennsylvania, where Trump is leading, but Biden is closing the gap. And Biden’s advantage widened with a group of votes announced this morning in Nevada.

But the votes remaining are overwhelmingly from urban and suburban areas that are expected to go heavily for Biden.

On the other hand, a vote count released last night from Maricopa County, Ariz., leaned toward Trump, giving his campaign new hope. The Associated Press and Fox News forecast Biden would win the state.

New tranches of vote counts, however, are expected to come in throughout the day that are likely to benefit Biden.

"I think the story of today is going to be a very positive story for the vice president, but also one where folks are going to need to stay patient and stay calm. The counting is happening; it’s going to take time," said Biden campaign manager Jen O’Malley Dillon.

"Our data shows that Joe Biden will be the next president of the United States," O’Malley Dillon told reporters.

The Trump campaign is continuing its efforts to block counting or otherwise challenge counting processes in numerous states with lawsuits and protests.

It filed a new complaint today in Nevada, adding to its suits in Pennsylvania, Michigan and Georgia. But it also suffered setbacks in at least two of its legal challenges.

In Pennsylvania, Trump notched a victory this morning when an appeals court ordered state officials to allow closer observation of mail-in ballot examination. The Trump campaign argued they were kept too far away to see potential issues like improper ballots.

"I can’t stress enough how big a victory this is," said Justin Clark, the Trump campaign’s senior counsel.

"For the good of the nation, every Pennsylvania county should follow the lead of this judge and provide access for observers to ensure transparency and integrity in Pennsylvania. That is the only way to ensure a fair, transparent election in which all Pennsylvania voters can have confidence their vote will count."

In Nevada, a swing state that is still counting votes, the Trump campaign also claims it is not being allowed by Clark County officials to see ballots as they are counted.

"We are filing this federal lawsuit to protect legal voters," he said. "It is unacceptable in this country to have illegal votes counted, and that is happening in the state of Nevada."

Grenell was unable to provide any evidence to support his claims of illegal activity when asked by a reporter. Instead, he attempted to refer the reporter to county officials.

The Trump campaign suffered a setback in its Georgia lawsuit. The case, challenging a handful of votes that it claimed missed the submission deadline in Chatham County, was thrown out by a judge today.

"What we’re seeing on these legal suits are that they’re meritless and nothing more than an attempt to distract and to delay what is inevitable: Joe Biden will be the next president of the United States."

Environmentalists struck an optimistic tone in a postmortem of the election this morning, particularly as both Senate races in Georgia looked likely to head to a runoff in January, potentially deciding control of the upper chamber.

The League of Conservation Voters and its affiliates spent roughly $115 million on the election, LCV President Gene Karpinski told reporters, and it expects to be involved in the Georgia races as well.

"If [Senate Majority Leader Mitch McConnell (R-Ky.)] still runs the Senate, that’s a huge challenge. Let’s be honest about that," Karpinski said. "Having said that, we’ve seen progress be made now and then when an overwhelming rest of the body wants to get stuff done."

Still, greens said they were encouraged that they look primed to win the top prize: the White House.

"Joe Biden and Kamala Harris are on their way to a tremendous victory, and a hard-fought one," said Natural Resources Defense Council President Gina McCarthy. "And we have made it possible."

Correction: An earlier version of this story incorrectly said the Pennsylvania Supreme Court had reversed the order benefiting the Trump campaign.