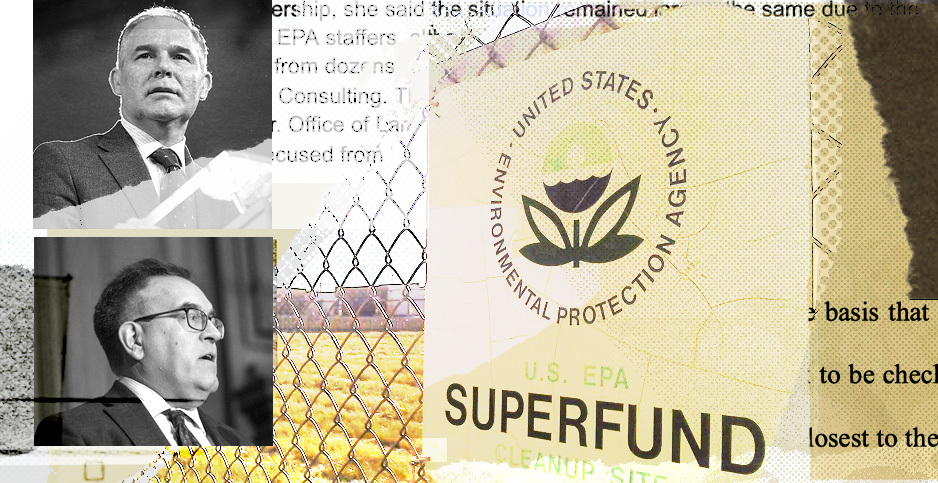 Environmental advocates have largely been critical of President Trump, but some still offer praise for the Trump EPA’s attention to toxic sites.

The Trump administration has also touted its successes in deleting Superfund sites, which allows those areas to begin revitalization efforts and apply for grants to bolster economic growth.

Under the leadership of former EPA Administrator Scott Pruitt and current chief Andrew Wheeler, the agency prioritized Superfund delistings as well as partial delistings. Pruitt, in particular, said Superfund cleanups would be a focus of his EPA when he took the reins in 2017. After Pruitt’s departure in July 2018, Wheeler continued to emphasize the Trump administration’s "renewed focus" on Superfund.

Experts and the communities living in proximity to the more than 1,300 sites managed under the federal Comprehensive Environmental Response, Compensation and Liability Act (CERCLA), typically known as Superfund, say the administration’s record is mixed, offering a complex snapshot of a program that has experienced turbulence under Democratic and Republican administrations alike throughout its 40-year history.

Some working on behalf of communities near Superfund sites spoke positively about the Trump administration’s leadership on the program, especially under Pruitt. Others expressed concern about trickle-down impacts of reduced agency staffing and budgets, as well as approaches to broader issues, including climate change. They also pushed back on the administration’s metrics for success, like site deletions.

"Deleting sites is all well and good," said Kate Probst, an independent consultant and Superfund expert who recently authored a chapter on the program for New York University Law School’s State Energy & Environmental Impact Center. "But deleting sites does not constitute implementing successful reforms to make the program more effective and more protective. It does nothing to get at the problem of improving the pace of cleanups going forward."

Bill Muno, a former Superfund director for EPA Region 5, similarly expressed concern about the emphasis on deletions. "I think they were looking for some metric to show the program is doing well under the administration," he said. "Site deletions are really the wrong metric in terms of measuring progress. I would almost refer to it as a smokescreen."

Now part of the bipartisan Environmental Protection Network, Muno has worked with other former EPA staffers on recommendations for improving the Superfund program. Muno said Trump’s repeated efforts to slash the Superfund budget sent "a clear message" about priorities.

The fiscal 2021 budget, for example, proposed cutting Superfund funding by $113 million, after similar proposed cuts for fiscal 2020. Meanwhile, the site backlog reached a 15-year high (Greenwire, Feb. 10, 2020). Figures released by EPA last February showed the Trump administration completed the fewest cleanups in 2019 of any administration since the early 1980s, when the program was in its infancy (Greenwire, Feb. 20, 2020).

EPA did not respond to multiple requests for comment about the administration’s Superfund legacy. Under Trump, the agency has repeatedly pointed to the number of sites deleted or partially removed from the National Priorities List.

"We have maintained last year’s accelerated pace and will have completed the deletion process for another 27 full or partial sites by the end of this fiscal year," Wheeler said during a speech to the American Enterprise Institute in September.

Critics argue that while deletions are positive, the administration is enjoying the benefits of work begun under past presidents, as cleanup efforts take decades. Experts also say deletion is the last step in a long process, and several said construction of a remedy is a more important milestone.

"Construction completion is the real metric to use," said Muno. He expressed concern about a decline in construction completions, as well as a perceived de-emphasis on enforcement. Muno also highlighted partial deletions. Under the Partial Deletion Rule, EPA can address contamination at parts of a site and then make those areas available for public use, even as the rest of a site remains hazardous.

Muno said that approach can sometimes prioritize "low-hanging fruit" and delete a cleaner area at a site, while leaving more contaminated areas without cleanup for 20 or 30 years.

"Partial deletion gives the impression that the site is OK," he said, calling that perception "troublesome."

A mixed bag for communities

Some communities near Superfund sites say the Trump administration offered a welcome shift.

"When Trump took office, I’m not sure what inspired [EPA] to make Superfund a priority. But I saw that they really were," said Jackie Young-Medcalf, executive director and founder of Texas Health and Environment Alliance, the home of the San Jacinto River Coalition.

Young-Medcalf has spent years working on issues around the San Jacinto River Waste Pits Superfund site in Harris County, Texas, near Houston. During the Obama administration, Young-Medcalf said she was almost never given the chance to interact with EPA officials to discuss the site’s cleanup. While she said she was skeptical of the Trump administration, she found an ally in Pruitt, who visited the site and convinced responsible industry parties to pay $115 million in cleanup fees.

Pruitt, Young-Medcalf said, approached the site "like a business" and went about streamlining the process. While she was critical of the Trump administration’s broader approach to acknowledging public health concerns and issues like climate change, she drew a contrast between the current EPA and the Obama administration.

Under Wheeler’s leadership, she said, the situation remained largely the same, although he has been less accessible than Pruitt. Wheeler had to recuse himself from dozens of Superfund sites, including the waste pits, due to prior work as a lobbyist. Office of Land and Emergency Management Assistant Administrator Peter Wright is also recused from hundreds of sites due to his prior work for Dow Chemical Co.

The Texas waste pits have drawn scrutiny recently after an EPA cleanup plan proposed disposing of toxic sediment, including dioxins, into landfills without protections for hazardous waste (Greenwire, Oct. 22, 2020).

Community advocates for other Superfund sites offered more mixed assessments. Most said they had seen little change in terms of pace from administration to administration.

Willis Elkins, executive director for the Newtown Creek Alliance, said progress has moved largely at the same pace at a New York City-area site, a sentiment echoed by others working on sites including the Gowanus Canal in Brooklyn and Portland Harbor in Oregon. But they expressed misgivings around the process and concerns about the Trump administration’s industry ties.

"We know that there has been a pretty major push for the Trump administration to basically do a quick speedup and make these cleanups cheaper and more efficient," said Cassie Cohen, executive director of the Portland Harbor Community Coalition. She added that cleanup efforts should "put frontline communities first" but said "we don’t have faith that the administration has had that in mind."

Multiple people working on Superfund advocacy and experts familiar with the program underscored that funding shortfalls and other challenges extend far beyond the Trump administration.

But issues like EPA budget cuts and low agency morale did seem to trickle down, according to several people, who said they saw few immediate impacts on the program but worried there could be long-term implications.

More disconcerting to some were issues beyond the program, including the administration’s overarching approach to public health and climate change. An investigative series published this year by InsideClimate News, The Texas Observer and NBC News reported that climate change threatens hundreds of Superfund sites. A 2019 GAO report found 60% of Superfund sites "are located in areas that may be impacted" by climate change.

Community members expressed concern about the administration’s failure to take action. "Our waterway has suffered from the impacts of the fossil fuel industry going back to its earliest days," said Elkins of the Newtown Creek site. "What’s happening today with climate change and our dependence on fossil fuels is not lost on us on a larger scale."

Cohen similarly referenced climate concerns regarding Portland Harbor. "We feel there’s been a lack of accountability around climate change and how it will affect our site and sites around the country," she said.

Other areas of concern include the administration’s failure to regulate per- and polyfluoroalkyl substances (PFAS) as hazardous substances. Several experts said they expect to see those "forever" chemicals regulated by President-elect Joe Biden’s administration, with implications under Superfund law and cleanup projects. They expressed disappointment around the current EPA’s pace in that area.

"Our hope is that the new leadership will be a little more proactive in addressing chemicals, like PFAS," said Muno, the former Region 5 Superfund director.

Stephen Lester, science director for the Center for Health, Environment & Justice (CHEJ), shared a 2019 report from his organization finding the program under the Trump administration "is serving mostly white people." Superfund sites are disproportionately located in nonwhite areas, but CHEJ found 61.1% of sites targeted under Trump have been in majority white communities.

Young-Medcalf acknowledged that some sites with clear responsible parties might be prioritized over others and that there might be demographic implications. The communities living near the waste pits, she said, are "very mixed" and diverse.

"At the end of the day, contaminants could be affecting a number of people," Young-Medcalf concluded.

Probst, the Superfund expert, seconded the mixed assessments made by community members. "There was a spotlight on Superfund in a way that there hasn’t been in a while," she said, comparing the Trump administration to the Obama, George W. Bush and Clinton administrations. "But rather than trying to figure out structural or institutional changes, they really picked off things that would be good press stories."

Ultimately, she said, the program is in need of an "infusion of urgency," something the Trump administration did not manage despite its early emphasis on Superfund.

"Are they worse than anyone else? I don’t know," said Probst. "It’s more that they said they were going to make it a lot better and it isn’t."