Trump leaves the details to Congress 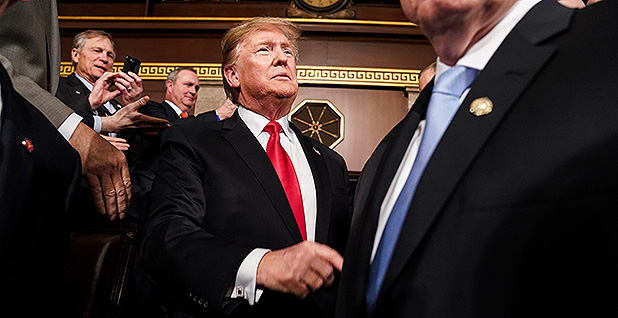 President Trump arriving in the House chamber yesterday for his State of the Union address. Polaris/Newscom

After two years of congressional clamoring for more details on his much-touted infrastructure plan, President Trump’s vague State of the Union call for lawmakers to send him a bipartisan package raised new questions over whether the issue could take off in the 116th Congress.

"I was expecting more," said Sen. Kevin Cramer (R-N.D.), a onetime Trump energy adviser and a close ally of the president, after the speech.

He acknowledged that Trump laid out "a little more specificity" in last year’s annual address to Congress but suggested that the president may have created an opening for members to step in and fill in the policy details.

"This time, he just laid down the challenge, and it’s up to us," Cramer said.

Although the White House signaled that infrastructure would be a major component of the speech, Trump devoted just a handful of lines to the issue.

"I know that the Congress is eager to pass an infrastructure bill — and I am eager to work with you on legislation to deliver new and important infrastructure investment, including investments in the cutting-edge industries of the future," Trump said in the one-hour, 20-odd minute address. "This is not an option. This is a necessity."

A White House fact sheet released during the speech offered few new details but laid out the scope of the administration’s view of what a package could include.

It said the president wants a bill "that delivers new and important infrastructure investment to rebuild our crumbling roads, aging bridges, crowded airports, and other infrastructure."

The White House document also called for investment in "visionary projects that leverage cutting-edge technologies in order to dominate the industries of the future and lead America into the 21st century."

It reiterated past calls for streamlining the permitting projects for infrastructure projects "so a six-month project does not turn into a ten-year odyssey," while also noting that "efficient permitting is especially critical for energy infrastructure and the ability of Americans to access reliable, affordable, and domestically-produced energy."

Delaware Sen. Tom Carper, the top Democrat on the Environment and Public Works Committee, who has repeatedly called for more administration engagement on infrastructure over the past two years, was underwhelmed by the scant attention paid to what is a personal priority for him.

"I thought it was thin, thin on the particulars," Carper told E&E News, laughing. "He laid out a lot of things to try to accomplish for our country and our people, some of them very expensive. Not a mention of how to pay for any of that stuff."

Carper said the lack of detail from the administration would not help push infrastructure to the finish line.

"Actually, if we don’t do it together, we’re not going to get it done," he said. "We’ve got to do it together. This is the same president that said in a meeting in the White House last year, when I was present, that we needed to pay for transportation and infrastructure, people who use it should pay for it, and we didn’t hear that tonight."

‘Take it and run with it’

EPW Chairman John Barrasso (R-Wyo.) said he was glad the president issued the call and noted that he plans to visit the White House today for a meeting to flesh out the infrastructure plan.

"The president talked about the need to rebuild our crumbling infrastructure. I agree with him, and I’ll be at the White House tomorrow," he told E&E News.

Barrasso also noted ongoing efforts behind the scenes to launch the infrastructure push, including his inaugural meeting with House Transportation and Infrastructure Chairman Peter DeFazio (D-Ore.) last week and his ongoing talks with Transportation Secretary Elaine Chao on the subject.

"It’s a legislative process, and we’re going to continue," he said.

"It was encouraging that he put it in the speech," Manchin told E&E News after the address. "We hope we can take it and run with it; God knows, we need it so bad. We’ve just got to look at what the particulars are, where the money comes from."

Manchin said the Energy and Natural Resources Committee’s bipartisan energy package that has been lingering after passing the Senate by a broad margin two years ago would be a starting point for that panel’s contribution to infrastructure.

Still, lawmakers from both parties said there are plenty of ideas on infrastructure, including how to pay for it. Cramer said it’s up to Congress to "pick the priorities."

"I think this president is open to all kinds of things. Tonight, I get the sense that he’s asking us to come up with a plan, and certainly, he’ll lend support and perhaps some guidance, but I think he could take whatever we can give him," Cramer said.

The senator also noted that the upcoming expiration of the highway bill will help get things rolling.

"At the very least, we’re driven by the fact that the highway bill is authorized for specific times, so there’s nothing like a deadline to motivate Congress, so let’s hope we can inspire some creative thinking," he said.

While Trump was also silent on the tricky question of how to pay for infrastructure, a pair of senators earlier in the day laid out their own vision of one method: the use of "Move America Bonds."

Sen. John Hoeven (R-N.D.) said the bonds he and Sen. Ron Wyden (D-Ore.) have proposed would "give the states really the ability to decide what they have to have, ’cause they know what projects are really critical in their state."

He said the plan has been well-received by Commerce Secretary Wilbur Ross and by state and local government groups. "We have quite a bit of support," Hoeven told E&E News.

The proposal would cost the federal government about $8 billion but would leverage about $50 billion in tax credits to promote infrastructure projects, Hoeven said.

"Just like you’re putting equity in that project, so you not only get that state and local money, but you get the private-sector investment. It’s a real leveraging device," he said.

For his part, Wyden touted a similar bond effort in the 2009 economic stimulus that is credited with stimulating $180 billion in investments.

"Sen. Hoeven and I have picked up with a different approach that gives a bigger role for the states, but it’s basically building on the model. I think it’s proved itself," he said yesterday ahead of the speech.

Democrats signaled last night that they would continue to press their own climate-friendly policies in the infrastructure push, including by promoting clean energy and resilience, traditionally areas of Republican skepticism.

If Trump had given more substantive details, "that would have then enabled us to hang some green infrastructure opportunity onto it," Rep. Paul Tonko (D-N.Y.) said after the speech.

But some Republicans suggested last night that they still might be willing to play ball on climate. Cramer suggested clean energy provisions could come in exchange for Republican priorities, such as permitting reform.

"I actually think this divided government presents an opportunity for compromise that we haven’t had in a while," he said.

Sen. Mike Rounds (R-S.D.), another member of the EPW Committee, also suggested he would be open to addressing climate change in an infrastructure bill, so long as it goes by a "state-by-state basis."

"I think most infrastructure should be determined state-by-state," Rounds told reporters last night. "In some states along the coastline, they may very well want to raise the levels of their highways, bridges and so forth. They want to make improvements in their utilities, their sewer systems and so forth."

"I want to lower health-care costs and prescription drug costs; I want an infrastructure bill. But I’ve heard this before. He talked about this during the campaign," McGovern told reporters. "He didn’t do a damn thing in two years."