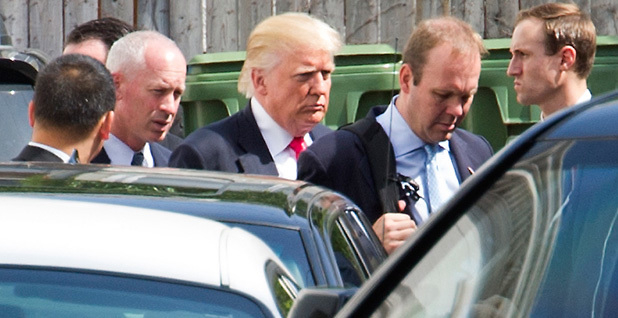 "Yes, he did," said the Wyoming Republican, who originally endorsed Sen. Rand Paul (R-Ky.) for the White House.

As the field of presidential candidates narrowed, Lummis opted to joined other House lawmakers in backing the brash business mogul.

Even though Lummis didn’t hear much from Trump on energy — she said he "touched on it about using all sources of energy to keep America strong" — she will cast a ballot for him in hopes of keeping a conservative majority on the Supreme Court.

Other energy boosters in the party agree.

Despite the lack of specifics in the meeting and on the campaign trail, Barton said he was comfortable with Trump because of the lawmaker’s close relationship with Rep. Kevin Cramer (R-N.D.), who has advised the campaign on energy issues.

Barton said he was comfortable that Trump’s policies "would be pro-market and pro-capitalism, so I think he’ll be fine on energy."

Flores added, "Let me rephrase that: He talked in general about energy policy and about regulatory policy."

Opening up the outer continental shelf and Arctic National Wildlife Refuge to oil and gas exploration, stopping federal restrictions on hydraulic fracturing, and blocking the Obama administration’s Clean Power Plan are among RSC priorities, according to a policy paper Flores released in April (E&ENews PM, April 22).

‘Getting the team together’

Lawmakers exiting the meeting at the GOP’s Capitol Hill Club to a throng of reporters and anti-Trump protesters said the focus of his remarks seemed to be more politics than policy.

"Getting the team together was kind of his focus this morning," said Rep. Steve Pearce (R-N.M.). Pearce said he would vote for Trump but was waiting to see his campaign’s "Hispanic outreach deals" before making a formal endorsement.

Trump also boasted of his latest fundraising haul. After a sluggish May, Trump made efforts to "pick it up" as Republicans on the Hill had been urging (E&E Daily, June 22). In June, he raised $51 million.

Flores said Trump emphasized "the need for unity, the fact that he was going to raise money and that he would be a very engaged, energized candidate."

Barton said that during the 40-minute question-and-answer session, he asked Trump to listen to and work with the Republican majority "and we’d help make him a successful president."

Barton said, "No group wants him to win more than the Republican members of the House."

"It was more of a business meeting, he wasn’t there for a rally, he didn’t present it like a rally," Cramer said. "He asked us to all stick together. He didn’t say, ‘Stick with me,’ he said, ‘Let’s stick together,’ talked about partnership."

He added: "I thought he was charming. I suppose if you hate Trump, he didn’t win you over. And if you love Trump, you felt pretty good about him. I think a lot of people were comforted by what they saw."

Senators emerging from their own huddle with Trump also had positive reviews, at least those who have been open to his candidacy. Some lawmakers in tough races stayed away.

“I was really surprised in the way that he was addressing the issues," said Sen. James Inhofe (R-Okla.). "He’s getting down and talking about things that are meaningful to him. I’ve been wrapped up for a long time in the over-regulation that’s killing businesses, and he knows all about it, and he did very well.”

While Trump was at the National Republican Senatorial Committee — his second and final meeting on the Hill — Democrats took the opportunity to bash him.

House Minority Leader Nancy Pelosi (D-Calif.) tried to tie all GOP lawmakers, including those who are on the fence about endorsing Trump, to some of his most controversial comments on minority groups. She called Trump "their standard-bearer."

"Trump is simply exposing the radical bigotry and backwardness that we see from House Republicans every single day," Pelosi told reporters.

Presumptive Democratic presidential nominee Hillary Clinton visited last week and, like Trump, focused much of her remarks on politics and unifying the party, according to lawmakers in attendance (Greenwire, June 22).

Without going into much detail, Clinton promoted climate change action and plans to help communities that are transitioning away from fossil fuels.

Pelosi sought to draw a line in the sand: "On climate change, Republicans are in denial," she said.

House Speaker Paul Ryan (R-Wis.) focused his remarks today on criticizing Clinton for her use of a private email server during her time as secretary of State.

About the meeting with Trump, Ryan said the candidate was committed to limiting the executive branch’s ability to issue rules. "I think we had a great meeting," Ryan said.