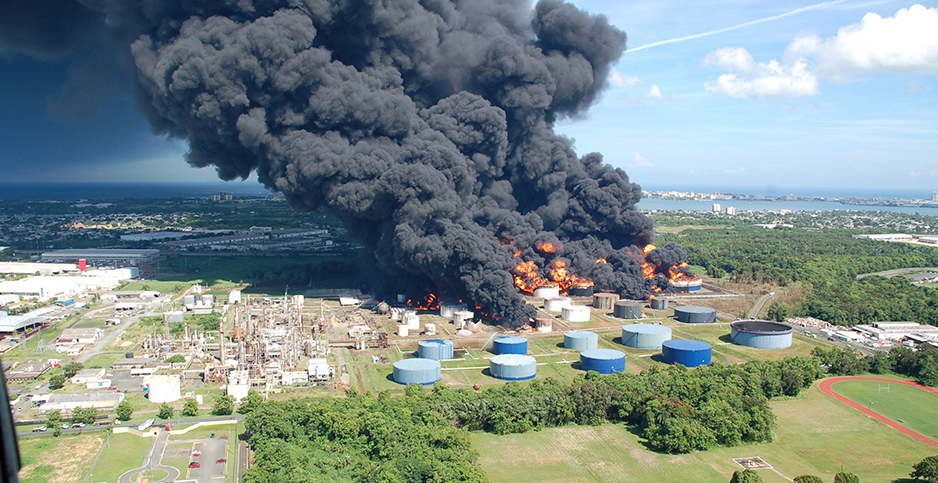 The Pipeline and Hazardous Materials Safety Administration has commissioned research on the causes of a series of vapor cloud explosions at gasoline and liquefied petroleum gas sites, concerned that liquefied natural gas export terminals may have common risk factors. An explosion at a gasoline storage site in San Juan, Puerto Rico, in 2009 caused significant damage to nearby properties. Chemical Safety Board

For years, researchers have warned that stored materials at liquefied natural gas export facilities could pose a risk of catastrophic explosions and potentially be a threat to the public.

But the issue is unlikely to be addressed when the Trump administration publishes a proposed revamp of the regulations governing LNG safety this September, according to industry watchers.

Instead, the upcoming proposed rule from the Pipeline and Hazardous Materials Safety Administration (PHMSA), which oversees LNG facilities, is likely to focus on streamlining U.S. regulations and harmonizing them with those in other countries (Energywire, April 11).

Additionally, a PHMSA-led working group on LNG safety in Baltimore last fall suggested it could take two years to fully assess an "evaluation protocol for non-LNG release hazards," according to a presentation on the agency’s research and development priorities. That timeline would put action on the issue far beyond the intended release of updated rules.

"There is no process in place to evaluate the suitability of the software models to calculate these hazards," and work should be done to figure out how to assess the accuracy of such models, attendees at the Baltimore meeting concluded.

The details of the rule could have long-lived safety implications, considering that multiple LNG terminals now on the drawing board in the United States will likely remain in service for decades.

The United States has a dozen LNG import facilities that have been built over decades of domestic natural gas use, but the shale gas boom of the last 10 years has triggered a flurry of development around new export facilities. The first of those, Cheniere Energy Inc.’s Sabine Pass LNG terminal, began commercial operations in 2016, and by the end of this year, five more are expected to be up and running. Another six export projects are fully permitted, but developers have yet to announce plans to build.

The PHMSA rule overhaul comes at the direction of an April executive order, in which President Trump highlighted the complete turnaround in the U.S. LNG industry.

"New LNG export terminals are in various stages of development, and these modern, large-scale liquefaction facilities bear little resemblance to the small peak-shaving facilities common during the original drafting of [the LNG rules] nearly 40 years ago," the executive order said.

PHMSA’s mandate for the overhaul is vague, saying only that the regulator should "update" the relevant portion of the federal codes and that the process "shall use risk-based standards to the maximum extent practicable."

While it’s uncertain what the agency will do to address explosion risk, it has acknowledged the issue.

PHMSA officials most publicly addressed the question of whether LNG export terminals could pose outsize explosion risks at a May 2016 public workshop held at the Department of Transportation’s Washington headquarters.

In a presentation at that meeting, a researcher from the U.K. Health and Safety Laboratory — a British government-affiliated facility with expertise in testing hazardous materials — presented a PHMSA-funded review of incidents in which releases of hydrocarbons like propane or butane led to catastrophic explosions.

The four accidents that were the main focus of that review did not take place at LNG facilities but at gasoline and liquefied petroleum gas storage sides, but PHMSA sponsored the research out of concern that storage of similar materials at a new generation of LNG export terminals in the United States could expose them to similar risks.

Three years after that presentation, PHMSA continues to keep explosion risk analysis on its list of high-priority areas for R&D. Asked last week whether the agency has taken steps to address the knowledge gap, Darius Kirkwood, an agency spokesman, did not respond.

PHMSA officials said they cannot discuss proposed changes to the LNG safety rules before a draft is released for public comment. But Kirkwood confirmed that materials presented during the 2016 workshop would be considered in developing the proposal.

A key advocate for the LNG industry, the Center for LNG, said through a spokeswoman that its leaders have no inside knowledge of what will be in the upcoming rule proposal.

They declined to comment on the industry’s progress in addressing explosion risks.

‘Serious hazards to the public’

LNG is natural gas, supercooled to a liquid by chilling it to minus 260 degrees Fahrenheit and then carefully maintaining it at that extreme temperature.

Natural gas, which is made up mainly of methane, will burn, but it isn’t considered explosive in open-air conditions. Importing LNG mostly involves taking in tanker-loads of the liquid and bringing it up to temperatures where it turns back into a gas.

Making LNG is more complicated, though, and involves separating out materials like ethane and propane that are present in the natural gas stream and then using refrigerants to cool the gas. All of those materials must be stored on-site at an LNG export terminal, and they bring new hazards that were not in play when the U.S. industry was oriented to imports.

Jerry Havens, a professor emeritus of chemical engineering at the University of Arkansas, developed computer models that LNG regulators used for years to assess certain LNG spill and leak hazards and was among the first to sound the alarm about the explosion risks that could be present at U.S. LNG export facilities.

In public comments Havens filed in 2015 about the Jordan Cove LNG project — an export plant proposed for construction in Coos Bay, Ore. — Havens and another longtime LNG safety researcher, James Venart, wrote that the safety analysis performed for the facility appeared to underestimate the risks posed by having gases other than methane stored in significant quantities on the site.

In the case of an accident, they said, damage could spread from one part of the facility to another and spiral out of control.

"We believe the hazards attending the proposed operations at the Jordan Cove export facility could have the potential to rise, as a result of cascading events, to catastrophic levels that could cause the near-total and possibly total loss of the facility, including any LNG ship berthed there. Such an event could present serious hazards to the public well beyond the facility boundaries," the researchers wrote.

Since then, Havens has only become more concerned that the industry is building a generation of LNG infrastructure that fails to properly account for the risk of a massive accident.

One issue he has raised is that the industry has turned to using tall barrier walls along the edge of their properties that are designed to keep any potential spilled natural gas from drifting onto neighboring lots. Havens sees those "vapor fences," meant to reduce off-site risk, as potentially increasing the chance of an explosion and the resulting damage.

Havens also sees a disconnect between the explosion pressures that LNG terminals’ engineering analyses show as worst-case scenarios and the observed results in similar conditions in real life — the issue highlighted by the British safety lab’s findings through its research for PHMSA.

Early computational models for LNG safety analysis were open source, allowing the community to pick apart the assumptions they rely on, but Havens said newer computational models are proprietary so he has not been able to dig into why the results are so far from what he would expect to see. PHMSA has not developed a protocol to evaluate and approve those models, so there is limited opportunity for questions about their accuracy to be addressed.

Based on the historical review and recent work by British regulators to assess the LNG hazard models, Havens believes the current system could underestimate the power of a worst-case accident by a factor of 10.

That could mean safety hazards that extend well over facility lines into public space. "Such overpressures could well lead to destruction of the plant and extend danger to the public outside the controlled boundary," Havens said.