Trump looks to quash any vulnerability on green issues 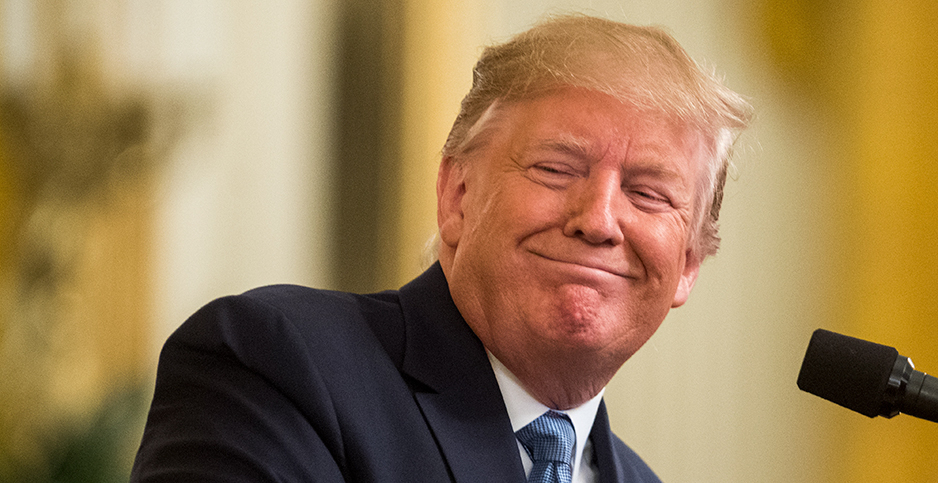 President Trump speaking about energy and the environment at the White House yesterday. Kevin Dietsch/UPI/Newscom

President Trump took an election-year swing yesterday at defending his environmental record, fighting back against criticism that his policy rollbacks are harmful.

His remarks came as polls show the president may be vulnerable on green issues, and Democratic presidential hopefuls were quick to respond.

Just weeks after formally launching his 2020 campaign for reelection, Trump used his bully pulpit to tick off a list of accomplishments from his 2½ years in office, including a North American trade deal that mentions marine litter and air quality improvements decades in the making.

"From day one, my administration has made it a top priority to make sure America has among the very cleanest air and cleanest water on the planet," Trump told a largely supportive crowd of administration officials, leaders from conservative groups and others in the White House’s stately East Room.

Trump frequently contrasted his policies and results to those of President Obama and other Democrats, whom he accused of working to "kill millions of jobs."

"The previous administration waged a relentless war on American energy. We can’t do that," he said.

He also took aim at the Green New Deal — and, by extension, most of the 24 Democrats running in the presidential primary with the hope of taking him on next year. Many have endorsed the policy, while others have sung its praises and claimed to be inspired by it.

"It’ll crush the dreams of the poorest Americans and disproportionately harm minority communities," Trump said of the deal, citing the conservative American Action Forum’s claim that it would cost $93 trillion.

"President Trump’s policies are proof that you can have clean air and water and a vibrant economy at the same time. The Democrats’ $93 trillion Green New Deal would destroy jobs, cripple the economy and limit freedoms," said spokeswoman Sarah Matthews. "There will be a clear choice next November."

The speech came amid increasing signs that the environment and climate change are key weaknesses for Trump going into 2020.

He has worked to roll back dozens of environmental policies at EPA, the Interior Department, the Council on Environmental Quality and other agencies, including greenhouse gas emissions rules for power plants, methane emissions standards for oil and natural gas drillers, and protections for imperiled plant and animal species.

A Washington Post-ABC News poll released the day before Trump’s speech found that 62% of Americans disapprove of Trump’s handling of climate change, the highest disapproval rating of any area that pollsters asked about, including gun violence, health care and immigration.

The disapproval was 5 points higher than when pollsters asked a similar question a year prior. Trump, for his part, thinks his environmental record is something to boast about.

The Rhodium Group estimates the United States’ greenhouse gas emissions grew 2.7% last year over the previous year. EPA, however, put out graphs yesterday showing that decadeslong reductions in some key criteria air pollutants are leveling off or reversing, with some of the changes due to wildfires.

"This suggests that his aim for the election cycle is to argue that this is not a problem, everything is fine — and then go on the attack against whatever Democrats might be proposing to attack the non-problem, on climate or whatever else," Barry Rabe, an environmental policy professor at the University of Michigan, told E&E News.

Rabe said he doesn’t see many voters who will be convinced to support Trump after hearing an argument like yesterday’s. Instead, those who don’t like Trump’s environmental policies aren’t likely to vote for him in the first place.

"I’m not sure that there’s a constituency that’s not already in his camp that’s willing to jump on a bandwagon and say, ‘We’ve accomplished all that we need to accomplish,’" he said.

But Mandy Gunasekara, founder of the pro-Trump group Energy 45 and a former EPA air pollution official, said Trump is working to fix a messaging problem on environmental policy.

"There have been a lot of good-news stories that frankly haven’t received the attention that they should," she told E&E News. "Today’s event was a culmination of the fact that this is something the president promised, he’s delivered in a number of capacities, and I think the feeling is the press has not covered it in the positive way it deserves."

And Gunasekara said she’s not worried that Trump’s environmental record, or the public perception of it, will hurt him.

"I don’t have any concerns, because what we have is a robust record. It’s now upon people like myself to communicate it in an effective way," she said.

Oregon Rep. Greg Walden, the top Republican on the House Energy and Commerce Committee, found little if any disagreement with the president.

"The Trump administration has demonstrated that economic growth and environmental protection are not mutually exclusive principles. We can do both," he said. "The truth is, with policies focused on innovation, conservation and preparation coupled with a commitment to protecting American jobs, we can continue this progress."

Some of Trump’s potential Democratic opponents slammed the speech and said the president is misleading voters.

Former Colorado Gov. John Hickenlooper, a moderate on energy issues, called the speech a "non-reality TV show" and highlighted Trump’s "devastating rollbacks" as the true results of his record.

"Despite Trump’s fabrications, the latest episode in his non-reality TV show, we have seen devastating rollbacks on critical protections to our clean air and water and actions to address climate change," he said.

Senate Minority Leader Chuck Schumer (D-N.Y.) said from the floor, "Amazingly enough, Trump tried to claim credit as a leader on environmental protection, of all things. This is laughable."

Schumer continued, "The same president who pulled us out of the Paris agreement, who has filled his administration with oil and coal cronies, who has slashed protections for clean air and water and protections for public lands, and who has denied basic science, now wants to call himself a leader on the environment? Give me a break."

Environmental groups, which are generally opposed to the president, said 2020 voters won’t be "fooled" by Trump’s statements.

"President Trump has a political problem, one that he created and certainly didn’t solve by today’s surreal press event. The Trump administration’s record on the environment is beyond dismal, and voters know it," Joe Bonfiglio, president of the Environmental Defense Action Fund, said in a statement.

"The fact that Trump is making this sorry attempt to shore up his environmental credentials shows that he sees the writing on the wall. Polls are showing that climate change is the issue voters think he’s performing worst on, and the movement for the Green New Deal is taking off," Prakash said.