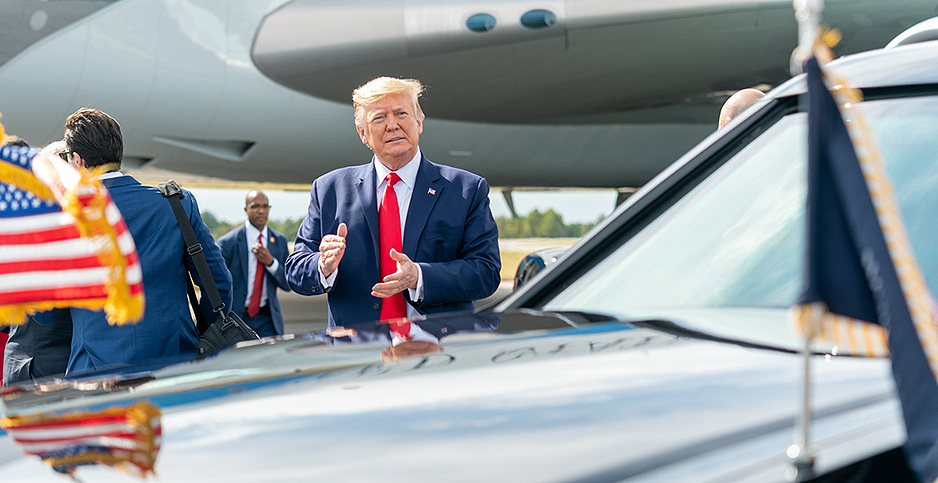 The Trump administration is backing off plans for a controversial fuel economy freeze. The White House/Flickr

President Trump is backing off a controversial freeze of fuel economy standards, marking a dramatic shift in his rollback of Obama-era clean car rules, according to a person familiar with the matter.

The Trump administration last year proposed freezing fuel economy standards at 2020 levels through 2026, rather than increasing their stringency by 5% each year as President Obama had mandated.

That proposal would have allowed cars to travel much shorter distances on a single tank of gas, releasing significantly more planet-warming pollution from their tailpipes.

But the administration now favors a 1.5% annual increase in the stringency of the standards, according to the person familiar with the matter.

The flip-flop comes after career and political staffers at EPA and the Department of Transportation struggled to produce a sound cost-benefit analysis to justify the freeze, the source said.

The staffers worried that the cost-benefit analysis wouldn’t survive the inevitable legal challenges from environmental groups and other critics, the person said.

In addition, the freeze was met with condemnation from the Alliance of Automobile Manufacturers, a powerful trade association whose members include General Motors Co. and Fiat Chrysler Automobiles NV.

The trade association repeatedly told the administration that it favored "year-over-year increases in fuel economy standards that align with the marketplace."

"My response is that it’s not a big deal. One-and-a-half percent is nothing to get excited about," Oge said.

"If you go back the last 30-plus years and look at the data, automakers have made on average a 1-2% annual improvement," she added.

A spokesman for the California Air Resources Board, which reached a voluntary agreement with four automakers this summer to improve fuel economy by 3.7% annually, also criticized the new target.

"1.5% is still not nearly enough for California to meet its air quality and climate goals," CARB spokesman David Clegern said in an email to E&E News.

The car rules rollback is a joint rulemaking between EPA and the National Highway Traffic Safety Administration, a division of the Department of Transportation.

EPA Administrator Andrew Wheeler hinted in September that aspects of the final rule would differ from the proposed rule released in August 2018.

"It’s safe to say our final [version] will not look exactly like the way we proposed it," the EPA chief told reporters (Greenwire, Sept. 11).

Asked for comment, EPA spokesman Michael Abboud said in an email, "The Trump Administration is focusing on finalizing the [Safer Affordable Fuel Efficient] rule which will deliver one national standard to the American auto market."

NHTSA didn’t immediately respond to a request for comment.