Trump may be firing blanks in his opposition to trophy hunting 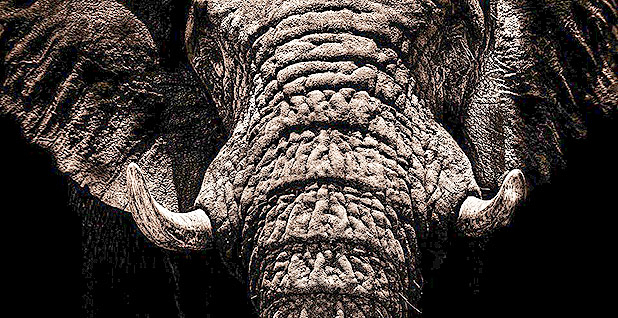 White House spokeswoman Sarah Huckabee Sanders insists that President Trump’s "position on trophy hunting remains the same," despite his own Fish and Wildlife Service’s latest action to the apparent contrary.

With her eyes downcast, as if reading from prepared talking points, Sanders told White House reporters yesterday that Trump’s views were constant, while she avoided repeating exactly what those views are.

"The president has been clear what his position is, and that has not changed," Sanders said, adding, "Anything further, I’d refer you to the Fish and Wildlife Service."

Sanders’ brusque and scripted response contrasted with Trump’s passionate denunciation of trophy elephant hunting last November as a "horror show" and his subsequent denunciation of the practice in a January television interview with trophy hunting foe Piers Morgan (Greenwire, Nov. 20, 2017).

"I didn’t want elephants killed and stuffed and have the tusks bought back into this [country]," Trump told Morgan.

Trump’s rhetorical posture, echoed by Sanders, and his repeated declaration to Morgan that he had "turned … around" an earlier FWS decision to allow trophy elephant imports also stand in marked contrast to what his administration has now done (Greenwire, March 5).

In a memo quietly issued last week, FWS withdrew 17 distinct enhancement findings that have been issued over the years for three species in five African countries. Trophy hunting permits, though, will still be issued.

For certain protected animals, Endangered Species Act regulations state that sport-hunted trophies may be imported into the United States only if, among other things, FWS makes "a determination … that the killing of the trophy animal will enhance the survival of the species."

The agency’s new trophy hunting permit policy calls for considerations on a case-by-case basis, while also allowing continued reliance on the same evidence compiled for the now-withdrawn enhancement findings.

"The Fish and Wildlife’s announcement is a response to a court decision impacting how trophy import applications are reviewed," Sanders said.

Safari Club International CEO Rick Parsons praised the new policy in an interview, predicting it would be more "efficient" and stating that "doing it on a case-by-case basis is actually better."

Wildlife conservation groups offer a viewpoint that sounds similar to what Trump asserts as his own.

"If the White House doesn’t support trophy hunting, why is the administration playing games with this case-by-case approach?" Tanya Sanerib, international program legal director at the Center for Biological Diversity, asked in a statement last night. "Trump needs to stop tweeting and tell [Interior Secretary Ryan] Zinke to get a ban in place now to save elephants."

If, however, Trump has spent his last round on an issue that threatened to alienate his allies in the hunting and gun-rights communities, the next steps will unfold more quietly.

The Fish and Wildlife Service’s March 1 memo explaining the new case-by-case policy was filed with U.S. District Court in Washington, D.C., where a federal judge under the dictates of a Dec. 22, 2017, appellate court ruling will be sending a follow-up order to the agency (E&E News PM, Dec. 22, 2017).

"We are awaiting the District Court’s remand back to the Service before implementing this approach," Greg Sheehan,
principal deputy director of FWS, said in an email.

The scope of U.S. District Judge Royce Lamberth’s eventual order is now being tussled over by lawyers.