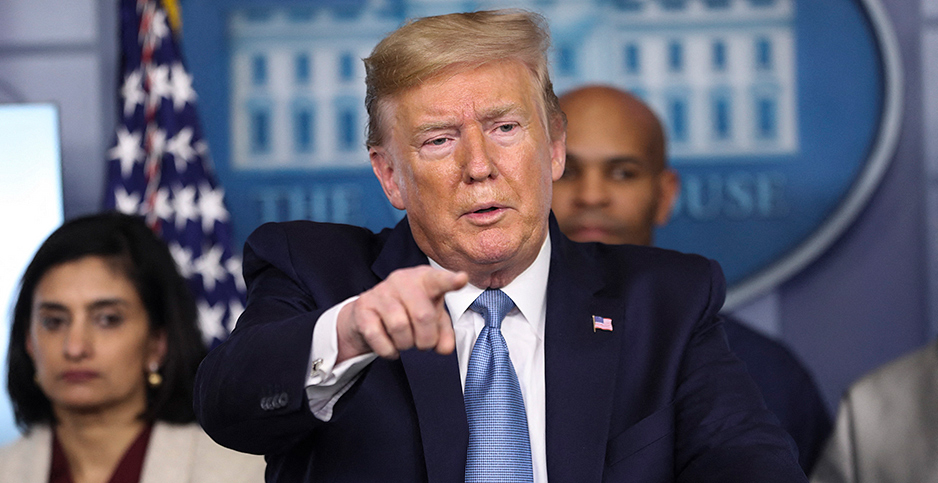 President Trump said yesterday that his administration is considering using the Army Corps of Engineers to build emergency hospitals following a plea from Gov. Andrew Cuomo of New York to deal with outbreaks of COVID-19.

"We are looking into it very strongly," Trump told a reporter who asked about Cuomo’s suggestion in a New York Times column that the Army Corps convert facilities such as military bases and college dormitories into temporary medical centers.

Assigning the Army Corps to build medical facilities could divert the agency as it tries to rebuild hundreds of levees that were damaged in the past year when record precipitation caused riverine flooding across the United States.

Major flooding is expected to intensify in the coming months at nearly 600 river sites, particularly along the Mississippi River, according to the National Weather Service’s latest projections.

The largely civilian agency, which is part of the Defense Department, spends most of its money on civil works and has grown increasingly popular in Congress. Lawmakers have approved tens of billions of dollars in recent years for projects aimed at controlling the growing flood damage caused in part by climate change.

"The U.S. Army Corps touches the lives of almost every American," Sen. Lamar Alexander (R-Tenn.) said at a hearing he convened Thursday on the agency’s fiscal 2021 budget. "Based upon the number of appropriations requests we receive, the Corps must be the federal government’s most popular agency."

Cuomo, a Democrat, said in his op-ed on Sunday and on Twitter yesterday that the Army Corps is needed to expand medical facilities as the novel coronavirus, which causes COVID-19, accelerates its spread across the United States.

"Our best hope is to utilize the Army Corps of Engineers to leverage its expertise, equipment and people power to retrofit and equip existing facilities — like military bases or college dormitories — to serve as temporary medical centers," Cuomo wrote in the Times. "Then we can designate existing hospital beds for the acutely ill."

New York, the nation’s fourth-most populous state, with nearly 20 million residents, has just 53,470 hospital beds, only 3,186 of which are intensive care beds, Cuomo said, adding that the United States has fewer hospital beds per capita than China, South Korea and Italy.

Cuomo stepped up his campaign yesterday and urged Trump on Twitter to "deploy the Army Corps of Engineers to build temporary medical facilities, so that when hospitals are overwhelmed, we can move people into the temporary facilities."

"It’s only a matter of time before our state’s ICU beds fill up," Cuomo added, referring to intensive care unit facilities. "The federal gov’t must act."

In response, Trump appeared to taunt Cuomo, with whom he has repeatedly clashed. In a Twitter post, Trump wrote: "Just had a very good tele-conference with Nation’s Governors. Went very well. Cuomo of New York has to ‘do more’."

"Happy to do your job, too," Cuomo quickly replied on Twitter. "Just give me control of the Army Corps of Engineers and I’ll take it from there."

Trump likely could use the Army Corps to build medical facilities under emergency authority that lets presidents end or delay the agency’s civil works projects and order the Army Corps to undertake "civil defense projects that are essential to the national defense," according to a memo by the Congressional Research Service.

Trump used emergency authority a year ago to enlist the Army Corps to supervise construction of expanded barriers along the U.S.-Mexico border.

Trump declared a national emergency Friday, although that order applies to the Federal Emergency Management Agency and makes states eligible for certain FEMA disaster aid to pay for emergency costs related to the coronavirus.

The Army Corps has become a favorite agency of Congress in the past two years as massive riverine flooding has damaged hundreds of counties in the interior United States.

Two years ago, Congress and Trump approved $17 billion in emergency funding for the Army Corps — most of it for projects that would protect against flood and storm damage.

Lawmakers from both parties have assailed Trump’s proposal in his fiscal 2021 budget request to cut the Army Corps’ civil works budget to $6 billion from $7.7 billion in this fiscal year.

Alexander said at the budget hearing Thursday that the United States "should spend more, not less, on our nation’s water infrastructure. This year’s budget proposal is a huge step backwards for our nation’s inland waterways."