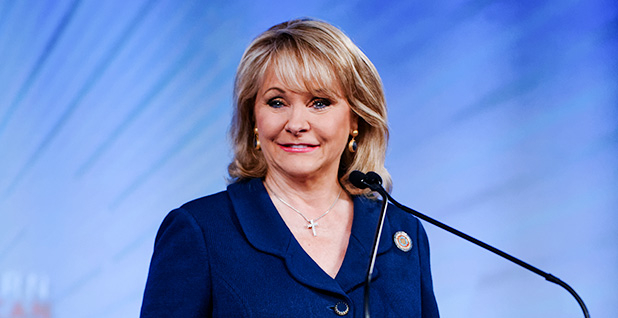 President-elect Donald Trump has been meeting with politicians who may be in the running to lead the Interior Department.

Today, Trump met with Oklahoma Republican Gov. Mary Fallin, who has been a rumored contender for the Interior post.

Fallin, who’s been in office since 2011, has been a staunch supporter of the fossil fuel industry and says she supports expanding renewable energy sources like wind power. She’s the former chairwoman of the National Governors Association and served as a House member from Oklahoma.

Trump discussed public lands issues with several other visitors over the weekend, according to his transition team.

They discussed "the optimization of federal lands across the country, energy exploration and mining," according to a summary of their meeting.

The Washington state lawmaker’s website calls for a "bold, comprehensive energy plan for the 21st century." The "basic principle of that plan should be ‘more of everything.’ Especially, more hydropower, and more energy research."

Their conversation touched on "transportation, infrastructure and issues relating to Western land usage," according to the transition team.

It’s still unclear whether these politicians are finalists for Interior secretary or other top government jobs, although Trump does appear to be preparing to make announcements for additional Cabinet jobs.

He’s also meeting today with former Texas Republican Gov. Rick Perry, who is rumored to be in the running for Energy secretary (see related story).

After meeting with retired Gen. James Mattis on Saturday, Trump wrote on Twitter yesterday, "General James ‘Mad Dog’ Mattis, who is being considered for Secretary of Defense, was very impressive yesterday. A true General’s General!"