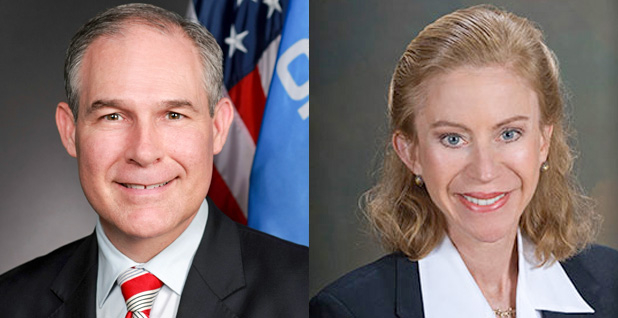 President-elect Donald Trump is scheduled to meet today with two possible contenders for U.S. EPA administrator who have called for drastic rollbacks of environmental rules.

Oklahoma Attorney General Scott Pruitt (R), who’s helping to lead the legal fight against the Obama administration’s signature climate rule, and former Texas environmental regulator Kathleen Hartnett White — who has called for restraining "the imperial EPA" — are both scheduled to meet with Trump and Vice President-elect Mike Pence in New York as they continue to announce picks for administration jobs.

Both Pruitt and Hartnett White have been rumored candidates for EPA boss under Trump. They’d bring different traits to the job: He’s a lawyer who has climbed the political ranks in the Sooner State and recently said he’d consider running for governor in 2018. She’s a public policy expert who served as a Texas environmental regulator, worked for a cattlemen’s trade group and was a special assistant in the White House for first lady Nancy Reagan.

They’d both be expected to slash environmental regulations written by the Obama administration and fulfill Trump’s campaign promises to dramatically reshape the agency. If either were nominated, he or she could expect a warm welcome from industry groups opposed to Obama rules but an icy reception from green groups.

"I think the vision is for a very different EPA if either of these candidates is nominated," said Scott Segal, an energy industry lobbyist at Bracewell.

"Industry feels like in recent years, EPA has stretched their statutory authority to the breaking point," he added. "They have taken the major statutes they’ve been entrusted with to places that Congress never intended. I think any of these appointees would be a signal that that kind of activity will no longer be tolerated."

Frank O’Donnell, a longtime environmentalist and president of the advocacy group Clean Air Watch, said either candidate would spark fierce opposition from environmentalists.

"If either of these folks get picked, they will be vilified relentlessly as the personification of evil, of a person who hates children with asthma and loves oil derricks and coal mines. Whether that’s a fair characterization or not, I think that’s how they’ll be portrayed," O’Donnell said.

Spokesmen for the Trump transition team have declined to comment on which particular jobs those meeting with Trump may be vying for. Trump’s other meetings scheduled for this week include sit-downs with rumored contenders for secretary of State retired Gen. David Petraeus, former Massachusetts Gov. Mitt Romney and Senate Foreign Relations Chairman Bob Corker (R-Tenn.). Trump will also meet tomorrow with Rep. Marsha Blackburn (R-Tenn.), House Homeland Security Chairman Michael McCaul (R-Texas) and Rep. Lou Barletta (R-Pa.), according to the transition team.

Many other names have been floated for EPA administrator, including additional state officials and former George W. Bush administration EPA political appointees. Another state attorney general, Patrick Morrisey of West Virginia, is another often-mentioned contender for the EPA job.

By nominating Pruitt for the job, Trump would be sending a signal that he intends to follow through with his promises to toss out some of the Obama EPA’s most contentious rules.

As Oklahoma’s attorney general since 2011, Pruitt has made headlines for participating in lawsuits aimed at dismantling Obama’s environmental policies. He’s been one of the leading legal opponents of the Clean Power Plan to slash power plants’ greenhouse gas emissions, and of EPA’s so-called Waters of the United States, or WOTUS, rule. Both those lawsuits saw early victories as courts agreed to put the rules on hold pending the high-stakes legal fights.

In a radio interview this month with billionaire John Catsimatidis, Pruitt was asked what he is most looking forward to under a Trump administration.

He accused the Obama administration of acting "outside of the Clean Air Act and other forms of environmental laws to dictate in such a way to be anti-fossil fuel. And it was a let’s-pick-winners-and-losers mentality, and that’s not what regulation should be, and that’s what we’re going to see responded to, I think, in 2017 and beyond."

Pruitt and his allies scored a big win earlier this year when the Supreme Court took the unprecedented step of freezing the Clean Power Plan before its merits had been considered by a federal appeals court.

Segal of Bracewell said Pruitt has a "track record of taking the EPA to court and of being a leader." While many attorneys general sign onto lawsuits, "Pruitt does more than that. He’s been a lead on some of this litigation," Segal added.

Pruitt started his career in politics in 1998, when he was elected to the Oklahoma Senate. He was also co-owner and managing general partner of Oklahoma City’s Triple-A minor league baseball affiliate — the Oklahoma City Redhawks. In 2001, he ran unsuccessfully for a seat in the U.S. House of Representatives.

Pruitt left the state Senate in 2006, when he ran a failed campaign to clinch the Republican nomination for Oklahoma’s lieutenant governor.

He recently told the Bartlesville, Okla., Examiner-Enterprise that he was considering running for Oklahoma governor in 2018 to replace Gov. Mary Fallin (R).

Fallin is also a rumored contender for a top job in the Trump administration. She met with Trump recently and could be in line for Interior secretary, so the state’s top job may be open sooner than 2018. It’s unclear whether Pruitt would prefer to vie for the governor’s mansion or accept a job in the Trump administration. Pruitt’s office did not respond to a request for comment about today’s meeting with Trump and Pence.

O’Donnell of Clean Air Watch said he views Pruitt as a "classic, glad-handing pol who’s run for office repeatedly, lost several times, won several times." O’Donnell also pointed to a New York Times report showing that Pruitt — serving as attorney general in 2011 — had sent a letter to EPA that had been written by lawyers from Devon Energy Corp., an Oklahoma oil and gas company, sparking criticism.

Hartnett White, a longtime environmental policy expert and a fierce critic of the Obama EPA, was a Trump adviser on the campaign trail.

She’s currently the director of Fueling Freedom, a project of the Texas Public Policy Foundation. She’s working at the think tank alongside Doug Domenech, who is leading Trump’s transition team at the Department of the Interior. That project seeks to end EPA’s Clean Power Plan, among other goals.

Hartnett White has been at the Austin, Texas-based think tank since 2008 as its distinguished senior fellow in residence and director of its Armstrong Center for Energy & the Environment. She previously spent six years on the Texas Commission on Environmental Quality, including a stint as chairwoman, during the 2000s. She was appointed to the commission by former Texas Gov. Rick Perry (R).

Hartnett White has been part of Trump’s presidential campaign since at least August, when she was named a member of his economic advisory council (Greenwire, Aug. 12). She also has ties to other Trump insiders.

She co-authored "Fueling Freedom: Exposing the Mad War on Energy" with Stephen Moore, an economic adviser to Trump and a fellow at the Heritage Foundation, which was published earlier this year.

Moore said today in an interview that Hartnett White would be "fantastic" heading up EPA and her record at TCEQ was "sterling."

"Texas had a boom period in those years, but at the same time, Texas had a drastic reduction in emissions," Moore said. "She would be great because she proves what Trump has said, which is reduce pollution but make sure that there is economic growth."

She wrote an op-ed in The Hill in June titled "Restrain the imperial EPA." Hartnett White supported legislation offered by Rep. Gary Palmer (R-Ala.) that would block the agency from regulating carbon dioxide, methane and other greenhouse gases.

In the op-ed, she argued that treating carbon dioxide like a pollutant was damaging America’s energy sector.

"The truth is that our bodies, blood and bones are built of carbon! Carbon dioxide is a necessary nutrient for plant life, acting as the catalyst for the most essential energy conversion process on planet earth: photosynthesis," Hartnett White wrote.

She has often espoused carbon dioxide’s benefits, instead of its dangers. She is a member of the advisory committee for the CO2 Coalition, which believes the gas shouldn’t be controlled by government regulators (Greenwire, Aug. 13, 2015).

Hartnett White has also defended fossil fuels. In June 2014, she authored a 36-page paper — "Fossil Fuels: The Moral Case" — where she said fossil fuels like coal as well as oil and gas "have been a necessary condition of prosperous societies and of fundamental improvements in human well-being." She also said that renewable energy, such as wind, solar and biomass, "remains diffuse, unreliable, and parasitic, in that those intermittent sources rely on fossil fuels for back-up."

Back in 2010, Hartnett White co-authored an article titled "EPA’s Regulatory Barrage and the Lone Star State," where she argued her home state was in the agency’s crosshairs again and again.

"With our many energy intensive industries, Texas is disproportionately impacted — and in some cases, it has been directly targeted by EPA," she wrote.

Hartnett is well-known among other conservative think tanks and on Capitol Hill. In recent years, she has made appearances at congressional hearings and the Heritage Foundation to talk environmental policy, and has been listed as a member of the American Legislative Exchange Council’s Energy, Environment and Agriculture Task Force.

At a congressional hearing in April last year, the ex-TCEQ chairwoman also detailed her position on climate change, saying the science wasn’t strong enough to warrant the move to carbon-free energy sources.

"I think the elimination of fossil fuels as rapidly as possible would have enormous impacts across the world," Hartnett White said. "But the science that supports the need to do that has to be extremely robust. I think that the current state of climate science is not strong enough, nor are the key models validated, in order to support policy of that magnitude."

Hartnett White’s sentiments on carbon and EPA as well as her record at TCEQ will draw pushback from environmental groups. They will look to Democrats to oppose her nomination if Trump picks her to lead the agency.

"Kathleen Hartnett White would be one of the worst environmental disasters the nation has ever experienced if she were appointed to run the U.S. Environmental Protection Agency," Smith said.

Nevertheless, even if Hartnett White doesn’t end up at EPA, she could find another position in the Trump administration.

Moore said, "If she doesn’t get EPA, I could easily see her as the head of the Council of Environmental Quality [in the White House]."