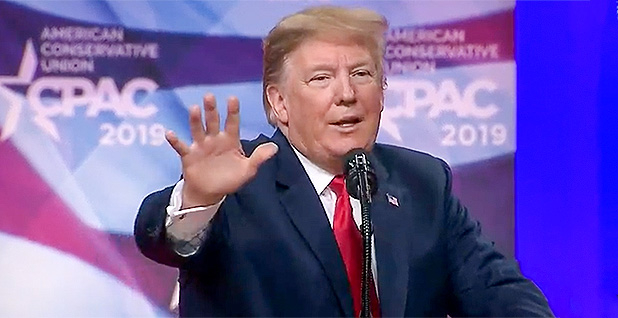 President Trump this weekend mocked the "Green New Deal" during a rambling speech that included comments about almost blocking drilling in the Arctic National Wildlife Refuge.

"You know I’m totally off script right now. And this is how I got elected, by being off script," the president said. "And if we don’t go off script, our country is in big trouble."

Trump once again took aim at the progressive resolution aimed at addressing the threat of climate change and reforming the U.S. economy.

"I think the New Green Deal or whatever the hell they call it, the ‘Green New Deal,’ I encourage it," Trump said. "I think it’s really something they should promote."

The president and his supporters have reacted to the "Green New Deal" with glee, using it as a way to paint Democrats as having gone too far left.

"They should stay with that argument. Never change," Trump said of Democrats.

Addressing the president, Sanders said that "climate change is not a hoax," but rather "an existential threat to our country and the entire planet, and we intend to transform our energy system away from fossil fuel and into energy efficiency and sustainable energy. And when we do that, we’re going to create millions of good-paying jobs."

The president, during his speech, criticized the "Green New Deal" for pushing for a dramatic increase in renewable energy, including wind, one of his top targets.

"When the wind stops blowing, that’s the end of your electric," Trump said. Imagining a conversation between a couple, he said, "Darling, is the wind blowing today? I’d like to watch television, darling."

At one point, the president talked up American energy growth, saying, "We need pipeline approval." Then he went back to misleading statements about the "Green New Deal."

"They want you to have one car, and it should be electric," he said. "New York City would have to rip down buildings and rebuild them again. I don’t think so."

And he described "Green New Deal" booster Rep. Alexandria Ocasio-Cortez (D-N.Y.) as "ranting and raving like a lunatic."

When it comes to opening a section of ANWR to drilling, an issue addressed as part of the GOP tax overhaul, the president said he had thought about opposing it.

"I got it approved! And I didn’t want to get it approved for a certain reason, ’cause I think someone treated me very badly. Very badly," he said.

Observers thought he was talking about Senate Energy and Natural Resources Chairwoman Lisa Murkowski (R-Alaska), who has not been afraid to be critical of the president and voted against the repeal of the Affordable Care Act, known as "Obamacare."

"Then I get a call from a friend of mine," said the president, someone who convinced him to support the pro-ANWR drilling provision.

Trump focused significant portions of his remarks on trade and tariffs, and his 2016 election victory.

But he also went after California Democrats again over high-speed rail and wildfires. "It’s one of the problems they have," said the president.

He told the crowd about the need to reduce fire fuel. "It’s called management," he said.