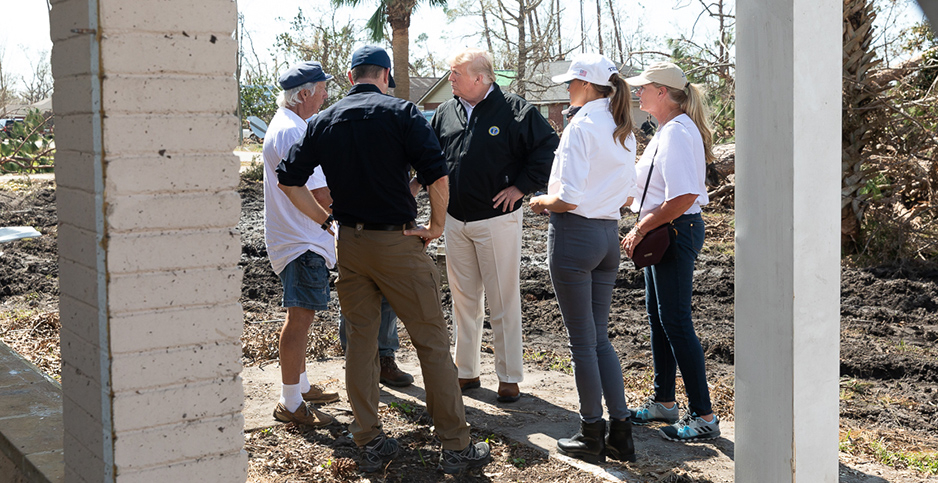 The partial government shutdown, now tied for the longest lapse in appropriations in the country’s history, is poised to harm recovery efforts in several states and U.S. territories ravaged by hurricanes, wildfires and severe storms in recent years.

President Trump is reportedly laying the groundwork to declare a national emergency so he could direct his administration to build a border wall without congressional approval — the main sticking point that led to the shutdown Dec. 22 — prompting concern from experts and lawmakers on both sides of the aisle that he could tap disaster relief funding to pay for it.

At the same time, the Department of Housing and Urban Development is preparing to stop processing $9.5 billion of disaster recovery grants.

Conflicting reports have emerged from Capitol Hill about the plan.

"The White House has directed the Army Corps of Engineers to examine the February 2018 emergency supplemental, which included disaster relief for Puerto Rico and other areas, to see what funds for disaster recovery and mitigation could be diverted to a border wall," a congressional aide familiar with the discussions said in an email.

The aide predicted that such a move "would massively affect flood-control projects designed to prevent future disasters that cause loss of life and destruction of property."

But a senior Republican lawmaker, whose district was hard-hit by Hurricane Harvey, denied that relief funds would be used to expand the wall on the southern border.

"I’ve spoken directly with the White House," Texas Rep. Kevin Brady, the ranking member on the House Ways and Means Committee, said in a tweet. The president, he wrote, is "committed to border security/ will not back down until adequate $$ are secured. Fully supports Corps funding to help Harvey communities rebuild/prevent future flooding."

Others, including lawmakers on the House Transportation and Infrastructure Committee, remain in the dark.

T&I Chairman Peter DeFazio (D-Ore.) said "all we know" is that Lt. Gen. Todd Semonite, who leads the Army Corps of Engineers, accompanied the president to the border to discuss funding for the wall. But members have heard little directly from the White House and the Army Corps.

Meanwhile, DeFazio said his committee is doing "a lot of research" about how to respond.

"There’s no clarity at all about where he’s really going," DeFazio said this morning. "We’ve got to wait for a tweet."

The move would likely draw bipartisan pushback on Capitol Hill, especially from members whose districts would be directly affected.

Rep. Mike Simpson (R-Idaho), ranking member of the Energy and Water Appropriations Subcommittee, said it would "piss off a lot of members."

"I’ve heard a lot of concern from a lot of members," he said. "You got to remember, the Army Corps has a project in every district in this country."

Indeed, many are crying foul.

"This money is supposed to be used on projects to defend Americans from natural disasters and rebuild communities impacted by them," Maryland Rep. Anthony Brown (D-Md.) tweeted today. "We’ll have fewer resources to protect places like Puerto Rico and Houston, TX from being destroyed."

Disaster recovery experts say there is a statutory provision that allows the Trump administration to pull money from existing civil works projects. But that provision applies only when there’s an emergency that requires the use of armed forces and only for use on congressionally authorized projects essential to national defense.

"The question in my mind is whether those two standards are met," said Lowry Crook, who served as principal deputy assistant secretary of the Army for Civil Works — the No. 2 person in the Pentagon overseeing the Army Corps of Engineers — from 2015 to the end of the Obama administration. Crook previously also served as chief of staff for the Council on Environmental Quality. He’s now a partner in the Washington office of the law firm Best Best & Krieger LLP.

Crook said that’s the language he believes the administration may use but questioned whether the emergency is one that requires the use of the armed forces. It’s also questionable whether the wall project would be authorized, he said, adding that he believes authorization would need to come from Congress.

Crook warned that the results of a national emergency declaration could be disastrous for recovering states.

Howard Marlowe, president of Warwick Group Consultants, agreed that the statute is probably the tool the Trump administration would use — and that it would have dangerous repercussions.

"It would be a severe setback. Those people are trying to recover from a disaster," he said. "You’re wide open for another disaster."

Some Republican lawmakers also fear that Trump’s broad use of executive power could be repeated by a future president who sees climate change as an existential danger to the United States (Climatewire, Jan. 11).

The president, however, has been making the case — at the border, in the Oval Office and on social media — that he has no other choice.

"Humanitarian Crisis at our Southern Border," he wrote in a tweet this morning. "I just got back and it is a far worse situation than almost anyone would understand, an invasion! I have been there numerous times — The Democrats, Cryin’ Chuck [Schumer (D-N.Y.)] and Nancy [Pelosi (D-Calif.)] don’t know how bad and dangerous it is for our ENTIRE COUNTRY," he said, referring to the Senate minority leader and House speaker, respectively.

But Trump’s claims about an "invasion" of undocumented immigrants — like others he has made about climate science and air and water pollution — are contradicted by figures collected by his own administration. Late last year, the Pew Research Center reported that the number of unauthorized immigrants in the U.S. fell to its lowest level in more than a decade, according to estimates based on government data.

At the same time the White House is targeting Army Corps disaster recovery funding, the shutdown is also delaying HUD’s review of recovery plans submitted by Florida, Puerto Rico and the U.S. Virgin Islands, according to a Federal Register notice. Altogether, those plans involve $9.3 billion worth of projects related to Hurricanes Harvey, Irma and Maria.

California, Georgia and Missouri also have a total of $221 million stuck in limbo due to the shutdown. The money is intended to help the states’ "response to unmet needs arising from major disasters declared in 2015, 2016, and 2017," the notice says.

"HUD cannot be assured of completing the reviews of these pending submissions and issuing affirmative approvals as required by [law] given the impact upon HUD’s operations during the appropriations lapse period," the agency said. "Therefore, the Secretary finds that there is good cause to waive the statutory sixty (60) day review deadline … and is issuing an alternative requirement for review."

It’s unclear at this point whether Trump could also be looking at using HUD funding for the wall. The White House didn’t immediately respond to a request for comment.