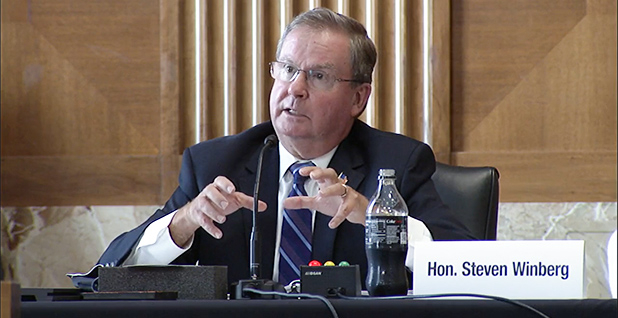 Steven Winberg will serve as acting DOE undersecretary in addition to his role as the department’s assistant secretary for fossil energy.

Andersen, who will be responsible for CESER’s day-to-day operations, previously served as the deputy assistant secretary for infrastructure security and energy restoration in the cybersecurity office.

In addition, Brouillette announced that Gates will remain in the Office of Strategic Planning and Policy as senior adviser. Gates had just nine months as CESER’s leader, having taken over from assistant DOE secretary Karen Evans in February.

Gates joined DOE from the National Security Agency, where he worked in intelligence analysis, cyber operations, research and tool development. He previously served as deputy director for cyber at DOE’s in-house intelligence department, the Office of Intelligence and Counterintelligence.

Appearing before Congress in August, Gates warned that DOE needs greater funding and "more authorities, laws and in some respects extreme level of collaboration" to protect the grid from hacking threats (Energywire, Aug. 6).

Gates also noted during the hearing that while he believes trust between the private sector and government is growing, the challenge is getting classified information "sanitized" and distributed through the Department of Homeland Security or the cyber and physical security information clearinghouse at the North American Electric Reliability Corp. Gates said that they "haven’t totally solved the problem now. It’s a work in progress."

Gates has pushed for the creation of a CESER operation called the "DOE Integrated Security Center" (DISC), to be based in Denver. DOE told E&E News the center would be "a critical connector" across the department and with the utility industry to speed responses to cyberthreats in the energy sector.

A DOE source not authorized to speak on the record said Gates sought to use the center as a means of increasing CESER’s access to highly classified cyberthreat intelligence, and that may have triggered controversy within the department and other federal agencies.

Brouillette in his email also said Sean Plankey, who was second in command at CESER before joining DHS’s cyber office as the assistant director for infrastructure security in October, will stay with the department as a senior adviser (Energywire, Oct. 8).

Plankey has long been at the center of federal grid security efforts, including Trump’s May 1 executive order aimed at protecting the bulk power system from supply chain threats from nations that pose a national security risk. Plankey was previously global intelligence adviser at oil giant BP PLC.

Both Plankey and Andersen have supported a "Pathfinder" collaboration among DOE, DHS and the Defense Department that would deploy a rapid U.S. response to grid hackers (Energywire, July 7).

Winberg’s position has been open since August, when the Senate confirmed then-Undersecretary Mark Menezes for deputy Energy secretary.

The office of the undersecretary serves to advance the department’s strategic goals on energy policy, applied energy technologies, energy security and reliability, and certain DOE-wide management functions. The portfolio oversees three national laboratories through the applied energy offices and the four power marketing administrations through the Office of Electricity.

Prior to joining the administration in September 2017, Winberg served as senior program manager at Battelle Memorial Institute, a nonprofit international science and technology enterprise that manages eight national labs.

A former vice president for research and development at Consol Energy Inc. and ex-board chair of FutureGen Industrial Alliance Inc., Winberg is a longtime backer of carbon capture and sequestration (CCS) technology to reduce carbon dioxide emissions from fossil fuels.

He criticized proposed EPA greenhouse gas regulations at the time, saying CCS technology would not be ready in time to meet the requirements.

He’s been a champion of Trump’s embrace of every source of U.S. energy, telling a recent Marcellus Shale Coalition event that it is "too early in the game to sideline any energy resource."