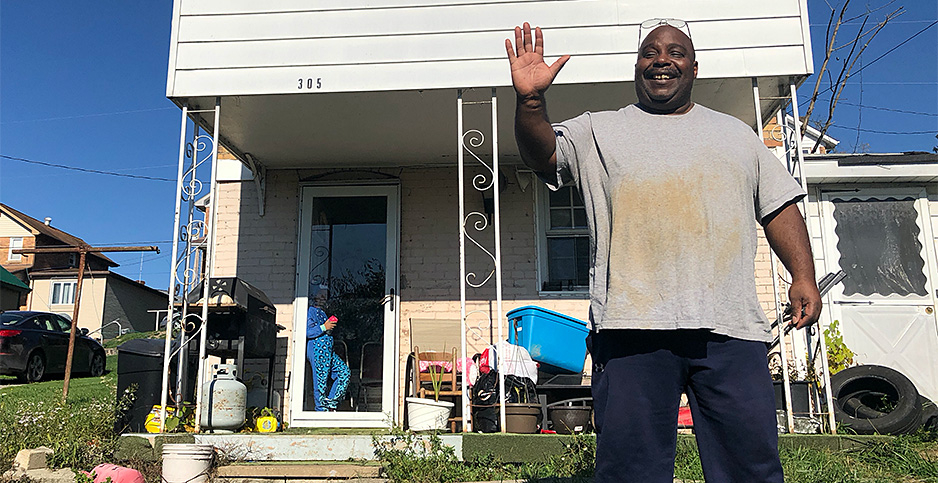 Wesley Silva of Marianna, Pa., worries that a nearby fracking well is endangering his family's health. Adam Aton/E&E News

Second in a series. Part one can be found here, and part three here.

MARIANNA, Pa. — When fracking came to Wesley Silva’s neighborhood, the drilling rattled homes and gas flaring turned the night sky orange. But it was the smell that worried him most.

A noxious stench like rotten eggs, Silva could smell it throughout town. Then, one day, he could see it.

"I had the kids come in, because it was like a mist running through the borough," he said.

Silva’s family had found themselves on the wrong side of a hydraulic fracturing revolution that has made some people rich while heaping costs onto others. That push and pull has defined the presidential race in this state, and last night it burst onto the national debate stage.

President Trump and Democratic nominee Joe Biden contrasted their climate plans in the most divergent terms yet — with Biden leaning into environmental justice as a reason to wean the country off oil, if not fracking.

But those benefits are concentrated among the already well-off, critics say, while the industry’s costs — air pollution, contaminated water and, increasingly, climate change — are more widespread. And as the industry swelled over the past decade, so has its footprint.

Silva’s house is less than 1,500 feet from a fracking pad. Pennsylvania allows companies to frack wells as close as 500 feet from buildings.

"The containment pond was right across the street from the kids’ bus stop," Silva said, referring to the open-air pits of wastewater, which can release toxins into the air as they evaporate.

Here in Washington County outside Pittsburgh, more people live near fracking sites than anywhere else in the state. About 156,000 of the county’s 208,000 residents live within 2 miles of a fracking well, according to a report by ECONorthwest for the Delaware Riverkeeper Network.

In the debate, Trump said such fossil fuel sites are a source of local jobs — especially for the Black, Latino and low-income communities where heavy sources of pollution are concentrated.

"Now, somebody lives [nearby] — I haven’t heard the numbers or the statistics that you’re saying, but they’re making a tremendous amount of money," Trump said.

Industry has said indirect employment numbers reach into the hundreds of thousands. But some researchers have called even the state’s more conservative estimate into question.

A Pennsylvania State University analysis of tax data suggested the number of gas jobs has grown half as fast as official statistics indicate. The researchers attributed that, in part, to fracking jobs being "transitory and filled by nonresident workers."

That impression is reinforced at fracking sites, where many of the vehicles bear out-of-state license plates.

"Look at all the jobs — Ohio, New York, Texas," said Lora Snyder, a fracking opponent, as she pointed this week to the vehicle tags at a work site in the Philadelphia suburbs.

Austin Aker, 24, started driving water trucks for a fracking company after moving to rural Susquehanna County from Washington state. It’s the highest paying job he could get in the region.

He rents a large house in an area where a series of environmental problems caused the state to halt new fracking. He’s hung an enormous Trump flag out front.

And he’s registered to cast his first vote this year as a Pennsylvania voter.

"If Biden wins, this area would probably go into an economic crisis," Aker said.

Some locals do get hired by fracking companies. But residents said the companies seem to pass them over when filling the most skilled, highest-paid jobs.

Silva, a former president of the Marianna Borough Council, said he only knew two locals who had been hired by the industry.

"They were to tend the gates," he said, describing them as security guards.