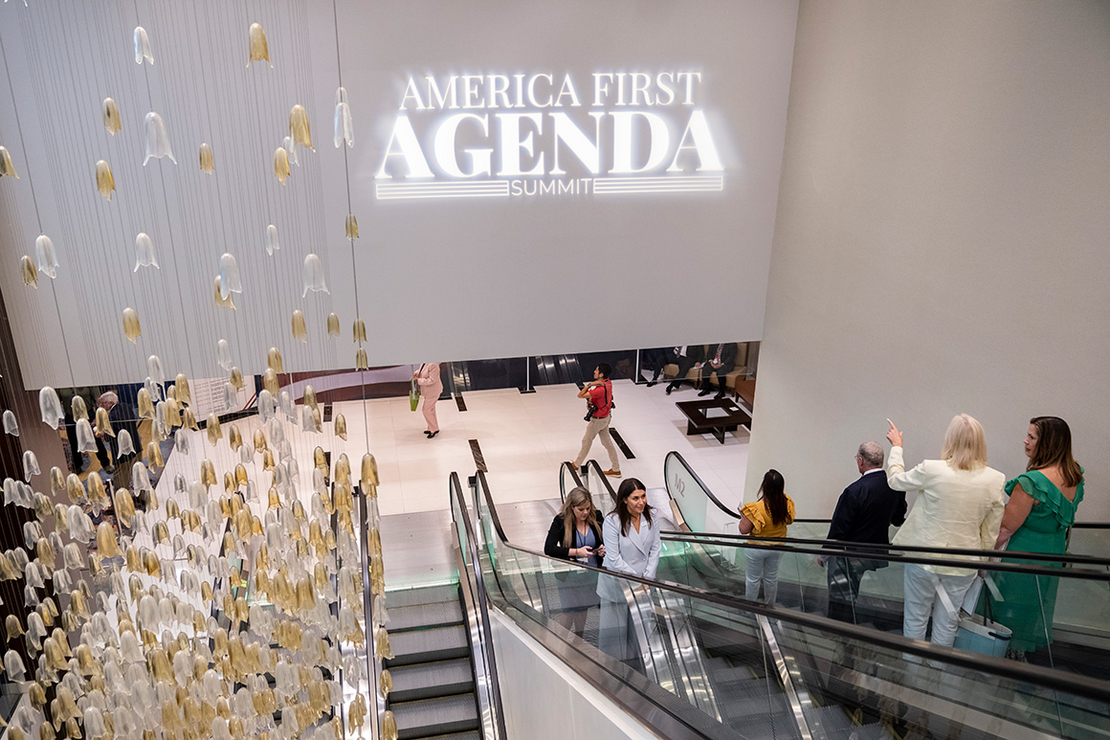 Former Trump administration officials and allies gathered in Washington yesterday to prepare for the day when they might get to dismantle President Joe Biden’s climate and energy agenda.

The “America First Agenda Summit” attracted hundreds of Republican activists and officials. It was organized by the America First Policy Institute, which has been nicknamed the “White House in waiting.” It is run by a group of top Trump advisers and Cabinet officials who are putting together a policy agenda for the next Republican president, whether it’s former President Donald Trump or someone else.

Rollins said the group formed shortly after Trump left the White House, but that its work began before the November 2020 election. Now, the group is outlining new policies patterned on Trump’s presidency.

Rolllins told the crowd that the organization will be “the hallmark, the linchpin for securing freedom in this country, not for two years or four years, but for 100 years.”

Attendees swarmed around Trump world celebrities like Conway, sometimes seeking selfies. They lined up to shake Perry’s hand and share a word. They cheered every mention of Trump’s U.S.-Mexico border wall and booed when Biden was brought up, particularly when former House Speaker Newt Gingrich (R-Ga.) called him a “doddering guy.”

Officials previewed a number of energy policies they hope to implement after the 2024 election, which could see a rematch of the 2020 election between Biden and Trump.

The America First Policy Institute is focused on reauthorizing offshore oil leasing and production, expanding pipelines and building a network of small nuclear reactors. It also supports rolling back regulations and environmental protections and speeding up energy infrastructure permitting.

Another strategy could be to reshape the federal government by firing or reassigning career officials. The group wants them to be replaced by loyalists to Trump or the next Republican president.

Gingrich said the America First Policy Institute is crafting policy for the next Republican president in the way that the Heritage Foundation did for President Ronald Reagan in the years leading up to his 1980 election. He said he expects that many of America First’s 150 employees would be scooped up by a Republican administration.

Gingrich said one of the first goals of the next Republican administration would be to fire tens of thousands of civil servants, including those who work on climate and energy issues. Trump issued such an order, called Schedule F, late in his presidency, but did not fully utilize its powers.

“We have a seasoned enough cadre that, if we work at it methodically … we can reshape the federal government,” Gingrich said.

“We don’t need to apologize to anybody for being for fossil fuels and how they have changed the world that we live in today, the flourishing of the world,” Perry said.

Conway told E&E News that Republicans will run on a message that Democratic climate policies are to blame for high gasoline prices. She said it will have an emotional appeal to people who are struggling to pay for fuel and food as a result of inflation.

Democrats could only counter that message, she said, if they are able to elevate climate to a top-tier issue, as Trump did with immigration.

“If the Democrats can do what President Trump did effectively, which is to take an issue like illegal immigration, which was mired in the single digits, and elevate it into the national consciousness in a way that makes people care, then they can do that, but they’re not sure who they are,” Conway said.

There was a pervading sense at the conference that all of Trump’s climate and energy policies — which rolled back regulations on power plants and vehicle emissions — would be a starting point. The next Republican administration, whether it’s Trump or someone else, will be more aggressive, David Bernhardt, Trump’s former Interior secretary, told E&E News.

“I’ve served in multiple transition efforts, and every one becomes slightly more sophisticated and aggressive,” he said. “I think that’s just the nature of how transitions will happen over time; each one is more aggressive than their predecessor, and so my view is that that’s something that is inevitable, irrespective of what you think the policy will be.”

Trump will speak at the conference today. It’s one of his first visits to Washington since leaving the White House in January 2021, two weeks after encouraging his supporters to march to the Capitol on Jan. 6.