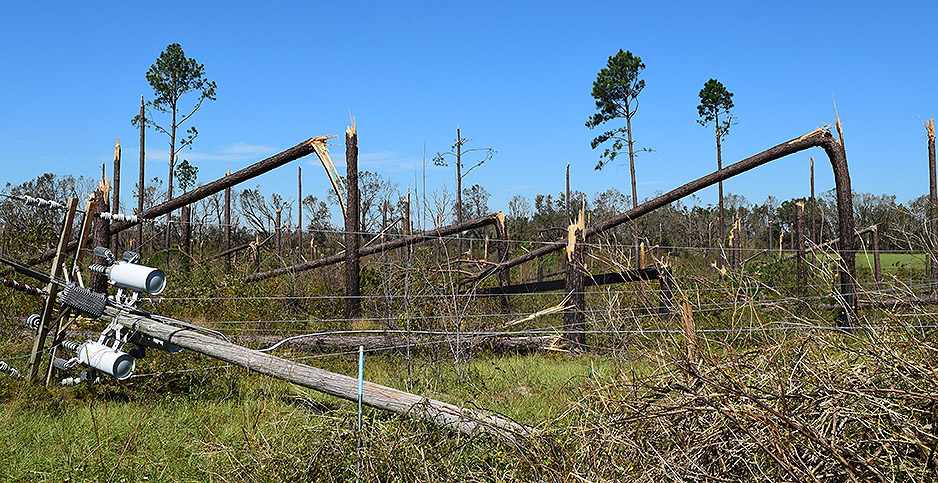 The Department of Energy is looking for information to help energy companies steel themselves against the impacts of severe weather events.

The department released two requests for information last week aimed at bolstering the resilience of America’s energy infrastructure. One is seeking "cost effective ways" for strengthening the electric grid in the face of extreme weather events like "windstorms, floods and wildfires." The other made a similar request of the oil and gas industry. It’s also asking for ways to improve cybersecurity.

Climate change is not mentioned in either request.

A DOE official said the department was responding to a request from the Federal Emergency Management Agency to help identify best practices for hardening energy infrastructure against weather-related disasters. FEMA is preparing to issue funding to help disaster-ravaged communities rebuild and plan for future events. DOE’s goal is to make the information available to the public to help guide policymaking and investments, the official said.

To some, that seems like an uncharacteristically practical approach by the Trump administration.

"This might be an example of a rogue effort at good governance at DOE," said Justin Gundlach, an energy attorney at New York University School of Law’s Institute for Policy Integrity. "This all looks like good stuff, apart from not referring to climate change or climate change vulnerability assessments."

The requests seek information on codes, specifications and standards for electric and oil and gas infrastructure. They also ask for best corporate business practices and analytical tools for estimating the economic benefits of resilience measures. And while the requests do not mention climate change, they acknowledge an increase in the disasters that scientists say will become more frequent as the planet warms.

"Concern among government agencies, utilities, and the public about the risks presented by more frequent and more severe weather events has led to widespread discussion about how to make electric infrastructure systems more resilient against such hazards, and how to do so effectively and at reasonable cost," DOE wrote in its request related to the utility industry.

FEMA has spent $12.2 billion on repairs to public utilities that were damaged in storms, hurricanes and other events that were declared federal disasters since late 1998, according to an E&E News analysis of agency records. That represents 14% of the $87 billion FEMA has spent on disaster cleanup and repairs to infrastructure such as roads, parks, water and sewer plants, and public buildings. FEMA generally pays 75% of disaster recovery and repair costs.

Half of the money for utility repairs has gone to three states: New York, which suffered heavy damage during Superstorm Sandy in 2012, and Louisiana and Mississippi, both of which were devastated by Hurricane Katrina in 2005.

The request represents something of a shift for DOE. The department came under sustained criticism in 2017 when it issued a proposal aimed at bolstering the resilience of the electric grid by providing subsidies to coal and nuclear plants.

The plan was ultimately rejected by the Federal Energy Regulatory Commission but not before uniting interests as diverse as environmentalists and the natural gas industry. Both argued that DOE would do better to improve the resilience of America’s electric grid by focusing on hardening distribution infrastructure like power lines, rather than focusing on fuel security at power plants, which account for a small fraction of electric outages.

Industry representatives and environmentalists said it was not entirely clear where DOE plans to ultimately take its latest effort. Requests for information generally are the first step in a rulemaking process. Yet it is unclear if a rulemaking will happen in this instance. Despite its name, DOE has little authority over America’s energy infrastructure.

"Simply adding ‘resilience standards’ on top of existing reliability standards, or favoring specific resources, won’t do the trick," said Gillian Giannetti, an attorney at the Natural Resources Defense Council. "To the degree the Department of Energy is pursuing ways to improve the distribution system, it’s a positive sign."

Emily Smith, issues management lead at the American Petroleum Institute, said oil and gas interests support DOE’s goals of improving the resilience of the country’s energy infrastructure. But she added, "It isn’t completely clear to us what the end purpose will be, but we believe the oil and natural gas industry has and is demonstrating our commitment to resilient and efficient infrastructure to supply the U.S. and the world."

The request for information says that its collection would help FEMA implement the Disaster Recovery Reform Act of 2018 as well as other federal efforts to enhance resilience.

The law aims to strengthen preparedness by providing more money to disaster-related damage prevention, among other things.

The law financially rewards states that promote resilience by encouraging municipalities to adopt new building codes. It also directs FEMA to issue a rule by April 2020 that defines "resilient" and "resiliency."

The power industry has also been thinking about the definition of those terms. Many experts argue it should focus on the ability of the electric grid to withstand and recover from extreme weather events.

More than 90% of power outages are at the distribution level, according to a 2018 study published by Grid Strategies LLC, a consulting firm. The study found weather is the primary cause of outage frequency and duration.

"I think no one can deny the increasing frequency and magnitude of these severe weather events, which look different in each region," said Rob Gramlich, the firm’s president and a co-author of the 2018 study. "They’re bigger and they’re happening more often everywhere. I’m very pleased to see the department taking this seriously and try to help the industry help figure out the best way to deal with it."

Gramlich said he was unconcerned by the absence of any reference to climate change in DOE’s request.

"If there is someone out there that wants to debate the cause of increasing frequency of severe weather, let them debate it. We need to protect ourselves," he said.

NYU’s Gundlach took a different view. The focus on adaptation could produce positive results, he said. But in failing to recognize the larger conditions responsible for increasingly severe weather, DOE runs the risk of pursuing inadequate responses, he added.

"Ultimately if you don’t close the circuit of adaptation and mitigation, then you guarantee your sea wall will be too low or your infrastructure will be in the wrong place," he said.