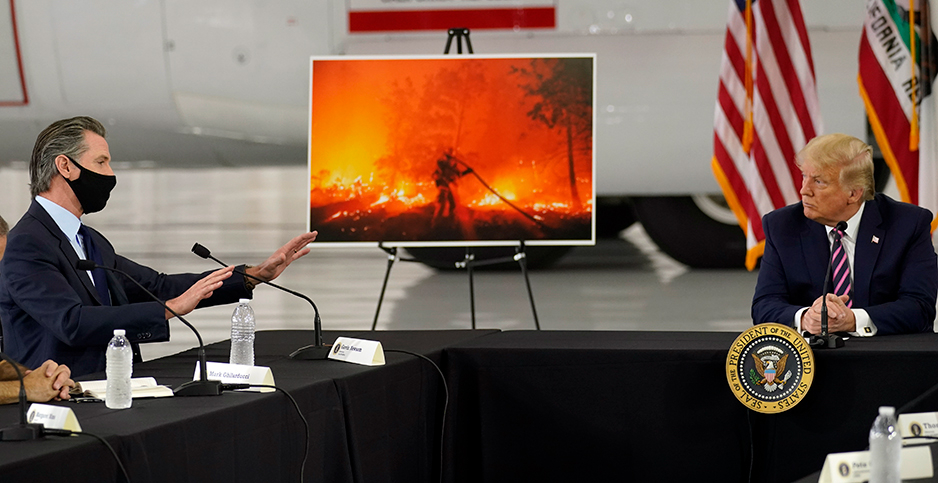 President Trump doubled down on his denial of climate change yesterday by saying that scientists are wrong and claiming that the world will "start getting cooler."

The remarks, delivered during a brief visit to California to discuss the state’s historic wildfires, run counter to mountains of research on global warming — including reports issued by his own administration (Climatewire, Nov. 23, 2018).

His comments ignored how climate change has contributed to natural disasters as the nation watches uncontrolled blazes spread across the West, causing catastrophic damage and killing more than 35 people.

Trump previously described global warming as a hoax and claimed that climate goes "up and down." He has also said that rising atmospheric temperatures will "change back again" on their own.

In past visits to Florida and elsewhere, he has refused to acknowledge the role climate change plays in worsening natural disasters.

California Gov. Gavin Newsom (D), who recently urged a more robust response to global warming, pushed back against the president’s views. His state set new heat records this summer. One day registered the hottest temperature ever recorded on Earth.

"We feel very strongly the hots are getting hotter, the dries are getting drier," Newsom said. "Something has happened to the plumbing of the world, and we come from a perspective, humbly, that we assert the science that climate change is real. Please respect the difference of opinion out here with respect to the fundamental issue of climate change."

Instead, Trump spent his time in the state rejecting climate science. Before he arrived in California, Trump retweeted Steve Milloy, an attorney devoted to attacking climate policy and weakening regulations. Milloy blamed California’s fires on a natural drought cycle that stretches back 200 years.

Trump’s latest dismissal of climate science comes just days after it was revealed that a climate denialist was appointed to a senior role at NOAA — likely as part of a plan to attack the National Climate Assessment (Climatewire, Sept. 14). After the last assessment was released in 2018, Trump said, "I don’t believe it."

As he did during the deadly California fires in 2018, Trump blamed the wildfires on the state’s forest management.

"You go to other countries and they don’t have this problem, but they have more explosive trees, meaning they catch fire much easier," Trump said. "So we have to talk about that."

Newsom acknowledged that better forest management was an important strategy for managing wildfires in California, but he pointed out that much of the state’s land was under federal control.

"We acknowledge our role and responsibility to do more in that space," Newsom said. "But one thing is fundamental, 57% of the land in this state is federal forest land, 3% is California."

Happer spent months planning a hostile review of climate science at the White House, which was later shelved, and he worked to weaken federal climate science and climate policy. E&E News has previously reported that Happer is the only known researcher to have briefed Trump on climate change (Climatewire, Dec. 4, 2019).

As Trump spoke, the Democratic National Committee released a new ad that featured clips of Trump repeatedly saying that global warming was a "hoax" and that he would cut off California’s emergency funding if they didn’t "clean" the forest floors.

After the briefing, Trump left California and flew to Arizona to conduct a roundtable with Latino voters. He then returned to Washington, where smoke from the West Coast wildfires had drifted, according to the National Weather Service.