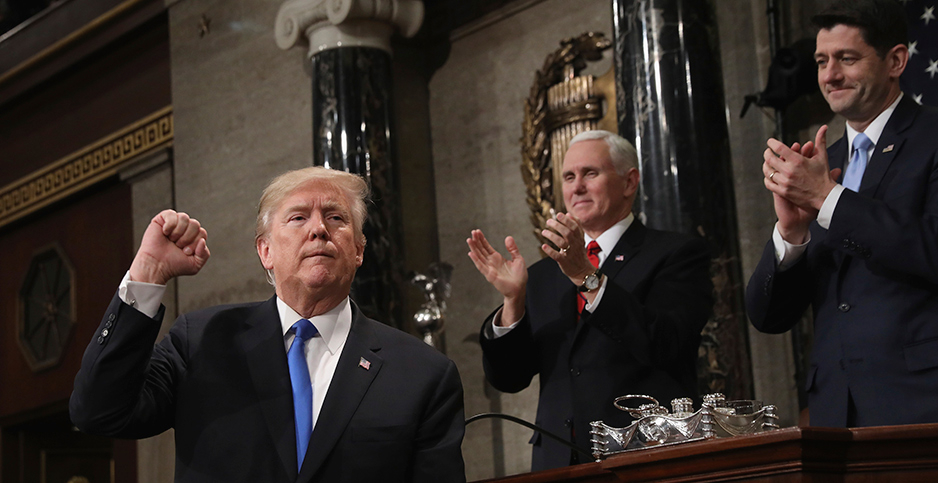 President Trump last night declared an end to the "war on American energy" during his first State of the Union address. Win McNamee/Pool/Associated Press

Ahead of his first State of the Union address, President Trump promised a "forward-looking" discourse.

But the president’s brief remarks on energy last night offered only a view of the past.

Hints of energy priorities were folded into Trump’s comments on his administration’s deregulatory strategy and infrastructure initiatives.

Trump boasted that on his watch, the federal government has eliminated more regulations in its first year than any previous administration. Among those efforts was the rescission of hydraulic fracturing standards introduced under former President Obama. Although Trump’s Interior Department finalized the fracking rule’s repeal in December, the regulation — and its ripple effect — is far from finished, according to a research note yesterday from ClearView Energy Partners LLC.

The rollback now faces legal challenges from the state of California and a coalition of environmental groups (Energywire, Jan. 25).

"If that action survives pending legal review, it could shift the balance on pending rollbacks by the Environmental Protection Agency, Department of Energy and other energy-relevant agencies," ClearView analysts wrote.

Trump’s approach on energy drew applause from his Cabinet.

"Already we have seen the president’s policies and tax reform spark greater investments in our energy sector, from the coalmines of Appalachia to the oil fields of the Permian Basin, managed by the Bureau of Land Management," Interior Secretary Ryan Zinke said in a statement following last night’s address. "Interior stands ready to support the president’s mission to unite and rebuild our great nation."

Advocacy groups questioned the premise of the president’s assertions.

"There has never been a ‘war on energy’ or on so-called ‘beautiful clean coal,’" said World Resources Institute President and CEO Andrew Steer in a statement. "Yet, this administration has failed to take advantage of the growing renewable energy markets, and instead focuses on outdated energy sources."

"Together, we can reclaim our building heritage," he said in his speech. "We will build gleaming new roads, bridges, highways, railways and waterways across our land. And we will do it with American heart, American hands and American grit."

A White House press release disseminated during the State of the Union address included a pledge to "build off" infrastructure improvements made during the first year of Trump’s presidency. His list of accomplishments included approvals of the Keystone XL and Dakota Access pipelines.

"This isn’t a bridge to the future," he said. "It’s a tunnel back to the Gilded Age."

Several industry and Republican allies sought to highlight the centrality of pipelines and other energy-oriented types of infrastructure not explicitly mentioned by the president in his speech.

Donald Santa, CEO of the Interstate Natural Gas Association of America, said that unlike other types of infrastructure, natural gas pipeline projects could often tap ready sources of private capital. Permitting reforms would get them deployed more quickly and more predictably, he added.

Improvements to the grid, streamlined regulatory processes for transmission lines and pipelines, and an expansion of energy storage, as well as offshore and onshore production, should be the administration’s energy priorities in 2018, Holt said.