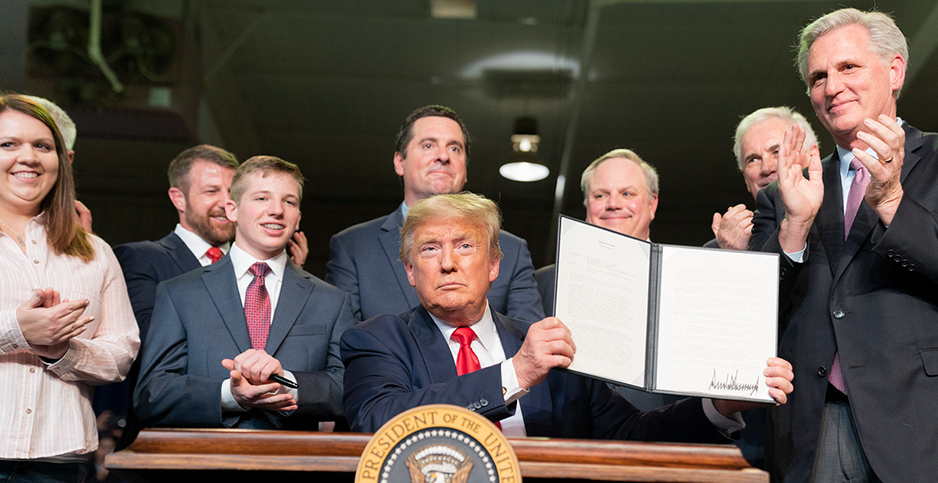 On the campaign trail in 2016, President Trump swung into California’s agricultural hub and vowed to deliver more water to the drought-ridden state’s farmers.

"We’re going to solve your water problem," he declared at a May 2016 rally in Fresno.

Three years into his administration, Trump is now opening the floodgate to deliver on that promise, setting up the most intense water war between the federal government and California in the state’s history.

"There isn’t precedent for this type of acrimony," said Jerry Meral, who served as a top water aide to Gov. Jerry Brown (D) during his administrations in the 1970s-1980s and 2000s.

Trump returned to California’s Central Valley in February, ceremonially finalizing an endangered species analysis that would allow more water to be pumped from the state’s ecologically sensitive water hub to farmers.

Bernhardt spoke at a "water forum" in the Central Valley the day before Trump’s speech, emphasizing the administration’s water efforts. That includes Interior’s continued work on raising Shasta Dam in Northern California, a mammoth project that would deliver more water to federal contractors including Westlands. Reclamation recently allocated $8 million to preconstruction work on the project.

California says it doesn’t want the dam raised — and that it would violate state law. It has issued its own endangered species analysis, which clashes with the Trump administration’s and would be more restrictive of water exports. And this week, it asked a court to immediately block Trump’s order from going into effect.

To proponents of the moves, however, Trump’s engagement is a blessing.

For environmentalists, there is an emerging concern that with Bernhardt at Interior’s helm, the administration has found its footing on California water and there is little the state can do to stop it.

And they worry that the current pace is indicative of what may come in Trump’s second term if he wins reelection in November.

"The Trump administration," Doug Obegi of the Natural Resources Defense Council said, "is not good at taking ‘no’ for an answer."

The key battleground is California’s water hub, the Sacramento-San Joaquin River Delta east of San Francisco, and how much water is pumped out of it.

Water from the delta is shuttled south to more than 25 million people and millions of acres of farmland in the state’s drier south via two complex systems of dams, canals and aqueducts: the federal Central Valley Project and California’s State Water Project.

The Newsom administration’s management of the delta has also irked both environmentalists and California Republicans in Congress.

All six of them, including House Minority Leader Kevin McCarthy, sent a letter to Newsom this month criticizing a permit for the State Water Project under the state’s endangered species law, applauding Trump’s biological opinions and calling for the state to drop its lawsuit.

"This unprecedented action threatens to send the operations of the State Water Project … and the Federal Central Valley Project … into a downward spiral of conflict, confusion, and litigation," they wrote. "It also virtually eliminates the possibility of finding a lasting peace to California’s never-ending water wars."

Westlands’ Birmingham argued that the new opinions are more protective of fish and wildlife.

He added: "What’s disappointing is that this conflict ends up in court. That is not going to resolve the issues."

And Birmingham said what the state is proposing is more similar to the Trump administration’s opinions than what is portrayed in the media.

But greens, however, worry that Newsom’s emphasis on voluntary agreements will result in capitulating to the administration. And they say this could just be the start.