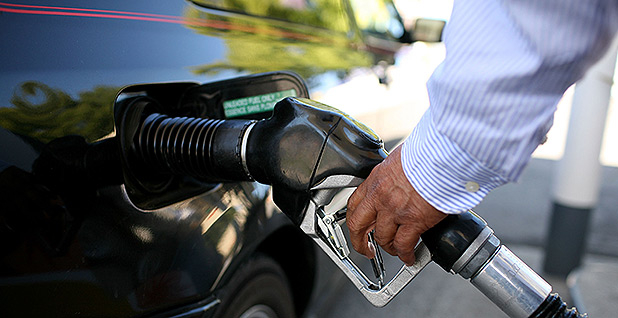 President Trump will meet with automakers and workers today in Michigan to announce that U.S. EPA and the Transportation Department are restarting a review of vehicle greenhouse gas emissions standards that the Obama administration finalized in its final days in a bid to lock in the rules. Photo courtesy of the California Board of Equalization.

U.S. EPA will reopen a review of vehicle emissions standards today that was "short-circuited" by the Obama administration in its final days, a senior White House official told reporters.

The move comes as President Trump promises to dismantle climate regulations and offer relief to the oil and gas industry, but it remains unclear to what degree the administration or automakers are seeking to roll back the rules. The official said the administration wanted to put the review "back on track" and that no decision had been made to loosen the standards.

Automakers have long said the increasingly stringent standards through 2025 are costly and difficult to meet given the surge in gas-guzzling truck sales. EPA and the National Highway Traffic Safety Administration will now have until April 2018 to decide whether to weaken the rules.

On a related topic, California will not see its Clean Air Act waiver, which allows it to set potentially higher car standards than the federal government, revoked "right now," the official said.

"We’re going to spend another year looking at the data in front of us, making sure everything is right, so that come to 2018 we can set standards that are technologically feasible, economically feasible, and allow the industry to grow and create jobs, which is very important to the president," said the official.

The announcement today is timed to coincide with Trump’s trip to Michigan to meet with auto executives and workers to tout his jobs agenda. He is scheduled to speak at an autonomous vehicle testing facility in Ypsilanti, Mich., at 2 p.m.

The White House official said the industry was "nowhere near reaching the standards from 2022 to 2025," and he echoed industry concerns that the rules would require automakers to sell more electric vehicles than consumers are willing to buy.

"The fact is because we have low gas prices, consumers are just not buying those vehicles," the official said, referring to plug-in vehicles. "If that continues, we’ll have to recalibrate."

The official added that automakers "rightly called foul" on the Obama administration’s decision to lock in the emissions standards for 2022-2025 on Jan. 12 — 14 months ahead of schedule. The official predicted that today’s decision won’t face legal challenges, because it’s revoking an Obama-era decision that never went through a rulemaking. The review will only deal with 2022-2025 rules, the official said.

Environmental advocates have already vowed to fight back against any rollback of the rules.

"The current standards helped the auto companies move from bankruptcy to profitability, and there is no reason they cannot be met," said Rhea Suh, president of the Natural Resources Defense Council. "This is just another part of President Trump’s retreat from action on climate change."

The greenhouse gas emissions and fuel economy standards, set by EPA and the National Highway Traffic Safety Administration, were tightened in a 2010 deal with automakers and formed a cornerstone of former President Obama’s climate policy. They would bring fleetwide fuel efficiency to a projected 50.8 mpg in 2025.

The White House official acknowledged that the administration could face legal challenges in 2018 if it decided to go another course, particularly with California’s vow to push through tough standards.

Thirteen other states making up more than 40 percent of the auto market have signed on to California’s program.